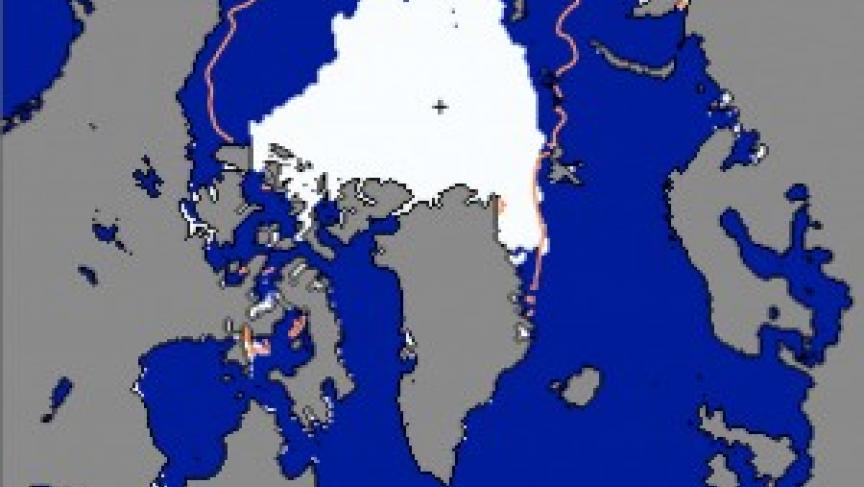 The Arctic ice sheet currently only covers (in white) a fraction of the area it typically covers during the summer (outlined in orange). (Map courtesy of the National Snow and Ice Data Center.)

There’s a striking new map up on the website of the National Snow and Ice Data Center, showing a blob of white surrounded by a sea of blue ringed by an orange line.

The white blob represents the size of the Arctic ice cap as of Monday. The orange line shows the median size of that same ice cap on the same date from 1979 to 2000.

And the blue in between is the difference, where the ice cap has been replaced by an area of open ocean bigger than Alaska, Texas and California combined. It’s a snapshot of how quickly things are changing in the Arctic and in particular how much ice has been lost this year.

It's been called unprecedented by scientists.

"A new daily record ... would be likely by the end of August," Ted Scambos, lead scientist at a data center that monitors ice in the Arctic said to Reuters. "Chances are it will cross the previous record while we're still in sea ice retreat."

Scambos called the precipitous decline in the size of the ice cap a clear sign of human-caused climate change.

"Everything about this points in the same direction: we've made the Earth warmer," he said to Reuters.

“The ice now is so thin in the spring, just because of the general pattern of warming, that large parts of the pack ice just can’t survive the summer melt season anymore,” he said to Wired.

Serreze said the implications of the melting aren't fully understood, but suggested they could be a cause of some of the extreme storms the United States has seen in recent years.

A few years ago, scientists predicted there would be an ice-free summer in the Arctic by the year 2100. Now, in the wake of the increased ice melt, some scientist are saying we may see such conditions before this decade is out.