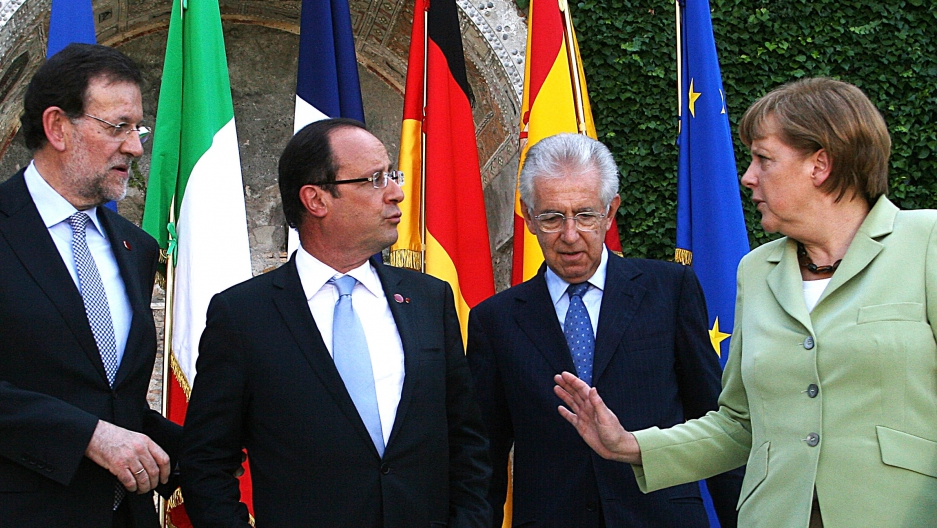 ROME, Italy — A month of market torpor has given European politicians some respite in their Alpine and Mediterranean summer hideaways during the August holiday season. No longer: the euro zone crisis is storming back.

The coming weeks may prove crucial for the currency's survival as a series of urgent meetings influences the increasingly worrying prospect that Greece will be forced to abandon the euro, which may bring cataclysmic results for the entire euro zone and the global economy.

French President François Hollande heads to Berlin on Thursday, when he is expected to urge Chancellor Angela Merkel to soften the conditions of Greece’s international bailouts and promote economic growth.

Hollande is reported to be deeply concerned about talk of a so-called Grexit. He's among many politicians who fear it could trigger a wider euro zone break-up and undermine the foundations of Europe's drive for political unity. French officials have pointed out that the German economy would be among the hardest hit if the euro zone were to dissolve.

Greek Prime Minister Antonis Samaras is due in Berlin the following day. He is expected to assure Merkel his government is committed to making more than $13 billion in spending cuts over the next two years. In return, he is likely to ask for a two-year extension for Greece to repay its rescue money and some relaxation of the interest rates. Then he will fly to Paris to meet Hollande.

Samaras is making his case to Jean-Claude Junker, head of the Eurogroup finance ministers, on Wednesday. He told Germany's Bild newspaper that Greece needs more "breathing room" to make spending cuts and implement reforms, but he said it would not ask for more money.

The immediate issue is whether Greece has done enough to receive its next installment of loans worth $39 billion, without which the country could default on its debts. Samaras is expected to argue elections this year forced the government to lose time implementing reforms.

There will be still more meetings next week. Italian Premier Mario Monti will hold separate talks with the French and German leaders before Merkel speaks to Spanish PM Mariano Rajoy, who must decide whether to seek emergency aid to keep his economy afloat

More from GlobalPost: For sale by owner: chateaus, palazzos, and barracks

Despite the massive pressures, European politicians are mostly maintaining a unified front. “The euro is the pinnacle of European integration,” Monti said in a weekend speech. “It would be a tragedy if, because of our inability as heads of governments, it became a factor of disruption which revives biases of the north against south or the other way around.”

The frantic diplomatic choreography will culminate in a Sept. 6 meeting of the European Central Bank, which is expected to decide how to mobilize its vast resources to buy up the debt of troubled countries on the secondary bond markets.

Massive ECB intervention is widely viewed as the only way to keep Spain and possibly Italy afloat if investors continue to demand ever-higher rates of interest on their bonds. Hopes the bank will act soon have prompted Spain’s borrowing costs to fall in recent days.

However, many in Germany remain opposed to ECB support even though countries that would benefit would have to submit to strict conditions, including the vetting of their budgets in Brussels.

Influential figures in Germany, including central bank officials and politicans from Merkel's government coalition see the prospect of unlimited central bank spending as a threat to currency stability and an unfair bailout of free-spending southern countries by their economically virtuous northern neighbors.

That's raised fears that Greece will be sacrificed to appease German hardliners — and their allies in Austria, Finland and the Netherlands — in a bid to save the rest of the euro zone through a wider rescue.

"Greece should go by the end of the year," said Markus Soeder, the finance minister of Bavaria, Germany's second-largest state, in comments to the Bild am Sonntag newspaper. "Any new relief measure, any easing of the restrictions would be wrong. Athens must be made an example.”

Once taboo for mainstream politicians, Greece's ejection from the euro is now a subject of regular conversation.

Luxembourg's prime minister and a leading German official at the ECB recently said a Greek exit could be "manageable," and Germany's economy minister last month said the threat of a Greek departure had "lost its horror."

On Monday, the Finnish finance minister admitted in comments to the BBC what many have increasingly suspected: Euro zone countries are preparing informal contingency plans for a Greek exit.

Although ministers in Merkel's federal government have sought to calm such rhetoric, they, too, are concerned money sent to Greece is not working.

However, Germany's partners will seek to persuade Berlin in the crucial meetings ahead that keeping the euro intact is not an act of charity, but vital self-interest.

German government and bank balance-sheet losses from a euro zone break-up could run to more than a trillion dollars, or 35 percent of the country's gross domestic product, according to an analysis published last week by the ING bank titled "Fixing it is far cheaper than breaking it."

A euro zone break-up could also seriously undermine Germany's exports, the basis of its resilience to the economic downturn.

France and Italy together bought almost $200 billion worth of German goods last year, more than the United States and China combined. If the euro zone splits, Germany would be saddled with a currency much stronger than those of its main European trading partners, making its goods more expensive and less competitive.

Although the standoff between the two main sides in the debate appears intractable, the Germans have previously talked tough before making concessions at crucial meetings. The fate of the euro could hang on the outcome of the upcoming round.