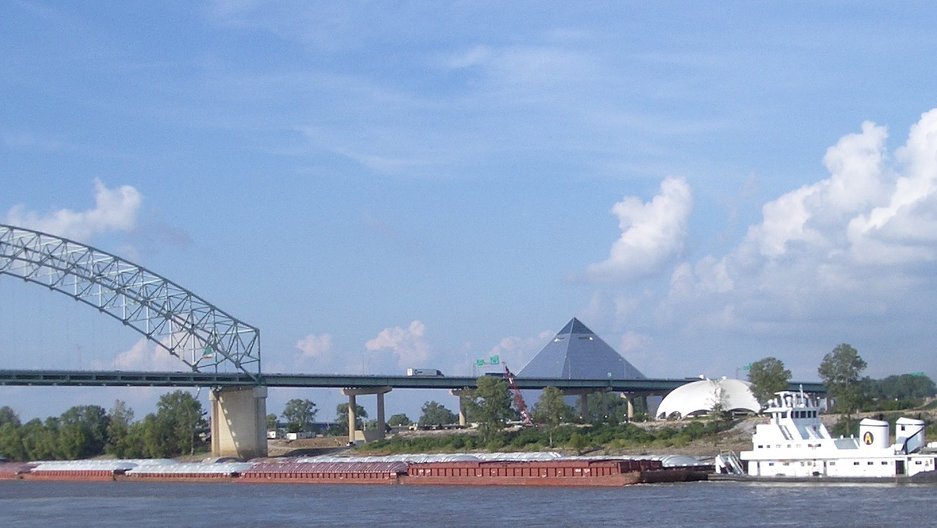 When times are good, a tow boat can pushed 40 or more barges down the Mississippi River, past Memphis (pictured), laden with goods. But with the water level low, smaller barge convoys are being put together and each barge has less in it. (Photo by Wikinau

Drought conditions across the United States have wilted crops and led many to expect the price of food will rise over the coming months.

The drought struck another blow this week when the lack of rainfall forced the U.S. Army Corps of Engineers and the U.S. Coast Guard to shutdown an 11-mile stretch of the Mississippi River near Greeneville, Miss., because the water level is too low for ships to pass through. At Memphis, up the river, the Mississippi is more than 12 feet lower than normal for this time of year.

Some 100 vessels were in line to pass through the closed stretch as of earlier this week. The Coast Guard and Army Corps have several dredges running up and down the river, removing silt and sand from the bottom of the river in order to try and maintain a minimum 9-foot depth so barge operations can continue.

These delays are costing producers tens of thousands of dollars as the delays mount — and eventually all of those extra costs will wind up raising prices on consumers.

Lynn Muench, senior vice president of regional advocacy with American Waterway Operators, said the problem isn't just where the river is closed, but up and down the river where the water level is low.

Right now, she said, tow boats can only guide about half the usual number of barges down the river at a time — and each barge has to be loaded 25 percent less full because of depth restrictions on the river.

"Right now, the ability to move goods in and out of this country have been severely curtailed," she said.

Muench pointed out that the Mississippi River system, including the Ohio, Missouri and Illinois rivers as well, is a particularly cost-effective way to move goods between and among large American population centers. It's also environmentally-friendly, she said.

"Most of the agricultural exports, that's a huge, positive balance of trade for this nation, go down the Mississippi River. That's being impacted as we speak. Ships are waiting for agricultural exports that right now are getting to New Orleans, but at a much slower fashion and a much increased cost," she said.

Muench said there's some ability to lessen the current crisis, if Congress and the Army Corps would release more water behind dams on the Upper Missouri River.

"Without that water coming out of the Missouri River for the middle Mississippi, we will essentially land-lock the upper Midwest, which is where most of the agricultural exports are coming from," she said.

Even then, there's no end in sight to the problem. The Mississippi River doesn't usually reach its lowest levels until sometime in October — and long range forecasts aren't predicting much rain in that timeframe either.

Coal, petroleum products and other commodities are also often transported down-river and with that option more difficult, they'll have to shift to more expensive ground transportation.