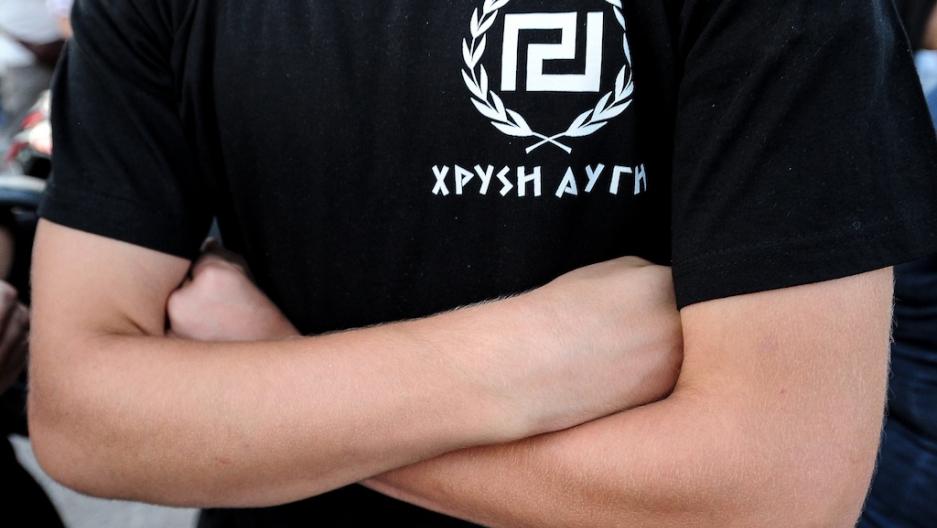 A supporter of extreme-right ultra nationalist party Golden Dawn (Chryssi Avghi), waits during a rally in Athens in June. Many accuse the party of being complicit in vigilante violence and using neo-Nazi, anti-immigrant rhetoric.
Credit: ANDREAS SOLARO
Share

A legislator from Hungary's far-right Jobbik party made headlines last week when he was dismissed from the party and pressured to quit his position in the EU Parliament after news of his Jewish roots became public.

Csanad Szegedi's history of anti-Semitic rhetoric cemented his prominent place in Hungary's right wing, but now amid scandal, he says he wants to get in touch with his roots. He's spoken with a rabbi and says he wants to visit Auschwitz, according to the Independent. Jobbik maintains his removal from the party has nothing to do with his Jewish heritage, and that he was punished for suspected bribery, which allegedly occurred when his Judaism was discovered and he attempted to pay people to cover it up.

Szegedi was also a founding member of the rabid paramilitary Nazi spin-off group, the Hungarian Guard, which was banned by the courts in 2009. It bears a striking resemblance to the Arrow Cross, the feared fascist party that rose to prominence in the 1930s and had strong ties to Hitler.

The central European country generally stays off the world stage, but a cartoon posted on Facebook has shaken things up. The AP reports that Heinz-Christian Strache, the leader of Austria's far-right Freedom Party, posted an anti-Semitic cartoon which showed "an overweight man with a crooked nose and cufflinks with the Star of David in front of plates of food, while an emaciated man looked on. The fat man represented the banking system and his thin companion the people, according to the legend."

The cartoon is similar to those used in Nazi German newspapers in the 20th century, and the Jewish community has erupted in protest.

"It's not a coincidence that a caricature of Jews, like the ones in [Nazi newspaper] 'Stuermer' in the 1930s and 1940s appeared on the Facebook page of FPOe leader Strache," prominent Jewish leader Oskar Deutsch said to AP.

But it gets worse. Strache also posted a picture of himself on his Facebook page standing next to a roast pig with the caption, "Isst du Schwein, darfst du rein," which translates to "If you eat pork, you can come in."

Representatives from the conservative People's Party, as well as the Green and Socialist parties have spoken out against the Freedom Party's anti-Semitic and Islamophobic lines, but so far Strache and the Freedom Party maintain the posts were innocent.

We've written here about anti-Muslim sentiment in France, mostly to do with the controversial ban on burqas and other facial/head coverings. But besides the sweeping Islamophobia in the country, the Roma face a similar and brutal kind of discrimination in France. Human Rights Watch and other organizations are concerned that France's methods of dealing with the Roma population violate EU and international rights laws.

Earlier this month, and possibly throughout the summer (there are three known instances, according to Reuters), authorities have swept Roma camps around France, deporting Romanian and Bulgarian ethnic Roma back to their home countries through a "voluntary" process that includes paying 300 euros and a plane ticket. Because they leave "voluntarily," the eviction system "bypasses any court review of the removals," said HRW.

“This week’s raids appear to be just the latest manifestation of France’s notorious expulsion policy targeting Eastern European Roma,” said Veronika Szente Goldston, Europe and Central Asia advocacy director at Human Rights Watch. “Rather than trying to get rid of unwanted Roma while no one is watching, the government should take a critical look at its sorry record in this area, and act to rectify abuses.”

New President Francois Hollande is facing criticism for the continued removal of Roma and razing of camps, hallmarks of his predecessor, Sarkozy. The anti-Roma movement by the administration is particularly alarming, especially considering Hollande's pre-election promise to end such discriminatory (and possibly highly illegal) practices by the French government.

In another time, the evacuation and relocation of Roma out of France might be called forced deportation, but the 300 euros is both an incentive to move and legal cover.

Xenophobia and anti-immigrant sentiment has reached an alarming high in Greece this summer, capped by a victory by the far-right party Golden Dawn in the June elections, which came away with 18 parliamentary seats. Golden Dawn is known for its swastika-like symbol, a salute reminiscent of the Nazis, and a fan base of very serious nationalists.

A recent article in the New York Times and a report by Human Rights Watch explain that along with electoral momentum, Greece is seeing a wave of vigilante violence against immigrants.

A week after an extremist right-wing party gained an electoral foothold in Greece’s Parliament earlier this summer, 50 of its members riding motorbikes and armed with heavy wooden poles roared through Nikaia, a gritty suburb west of here [Athens], to telegraph their new power.

As townspeople watched, several of them said in interviews, the men careened around the main square, some brandishing shields emblazoned with swastikalike symbols, and delivered an ultimatum to immigrants whose businesses have catered to Nikaia’s Greeks for nearly a decade.

“They said: ‘You’re the cause of Greece’s problems. You have seven days to close or we’ll burn your shop — and we’ll burn you,’ ” said Mohammed Irfan, a legal Pakistani immigrant who owns a hair salon and two other stores. When he called the police for help, he said, the officer who answered said they did not have time to come to the aid of immigrants like him.

Golden Dawn denied any of its members were involved in the threats in Nikaia. Meanwhile, HRW reports that immigrants interviewed in Greece said they won't go out at night for fear of assault and attack by "often black-clad groups of Greeks intent on violence."

Austerity and a continuing economic depression has crippled Greece, and as the summer continues, so has the uptick in xenophobic violence and governmental discrimination – curious, as Golden Dawn is a favored party of "many police officers... and disaffected youth," according to the Chicago Herald-Tribune. There have also been reports of a "fascist element" in the Greek police and deep connections to Golden Dawn for years. An op-ed from Al Jazeera also alleges Golden Dawn's police connection and describes their modus operandi.

"They terrorize immigrants, leftists, and journalists; they beat and maul teachers and students; they have infiltrated athletic clubs and have introduced hooliganism to the Greek landscape; and they have assumed the role of vigilantes," wrote Greek anthropologist Neni Panourgia in May. "Police brutality, hooliganism, and the deep-seated intimacy between fragments of the police force and Golden Dawn have made the organisation's temporary surge possible."

However, although reports of Golden Dawn members being complicit in street justice in Greece continue, there is no proof the party is actually behind the attacks, sanctioning them, or directing them, said HRW.

The Anti-Defamation League called on a Romanian lawmaker last week to apologize for what the ADL is calling "Holocaust denial."

Dan Sova, the newly appointed Minister for Parliamentary Relations, said "no Jew suffered on Romanian territory” during World War II, to the shock and dismay of many in the Jewish community in Romania and abroad. Sova was apparently sent on a field trip to the Holocaust museum, but has yet to publicly apologize for his remarks, according to Israeli news outlet Arutz Sheva.

Arutz Sheva also reported that Jewish parliamentarian Aurel Vainer called Sova "unsuitable for the job," and said she is “willing to wear a black band around my arm [in protest]."

Anti-Semitism is just one of Romania's problems as anti-Roma actions continue and the government turns a blind eye to the massive issues in the ghettos.

When the Roma go back to their countries of origin from places like France (see above), more problems arise: the ghettos in cities like Bucharest are even worse than the Western European camps, according to a recent op-ed by Valeriu Nicolae, founder of the Policy Centre for Roma and Minorities.The instances of HIV/AIDS is increasing, he said, as well as crime and illiteracy. There is little incentive for Roma to leave France return to the East, where they are a despised ethnic minority and face terrible violence and discrimination, which has only increased in recent years.

But most of the serious anti-Roma action comes from Romania's neighbor to the West, Hungary.

In July, a mob descended on the small village of Devecser (famous for the 2010 sludge flood) after a 2,000-person Jobbik rally took place in the square there. The predominately Roma-populated village was an obvious choice for a rally of nationalist white supremacists, and Amnesty International reports eyewitnesses said "some members of the crowd chanted anti-Roma slogans and threw pieces of concrete and other missiles at Roma houses. The police did not act to stop the violence and it is unclear whether any arrests were made."

Amnesty called on the Hungarian government to crack down on policing Jobbik and vigilantes aligned with the party, which rose to prominence in the past few years. But there has been little movement besides a softly-worded response from the Prime Minister's office, according to Politics.hu, an English-language news site.

More from GlobalPost: Why you should care about Hungary's rabid right

"One activist told Amnesty International that she was in the courtyard of one Roma house when it was attacked," says Amnesty's report of the incident. "The crowd started chanting anti-Roma slogans and threw bottles, stones and pieces of concrete. She was hit in the arm and injured by a piece of concrete and has since filed a criminal complaint with the police."

Hungary is also still reeling from the whiplash-inducing 180-degree turn by Szegedi, who like any good politician, will now look into better understanding his Jewish roots. But don't get excited, he's not totally reformed from right-wing anti-Semite. According to the AP, Szegedi is quoted as saying he just defines himself as having “ancestry of Jewish origin — because I declare myself 100 percent Hungarian." Because you can't be both, apparently.