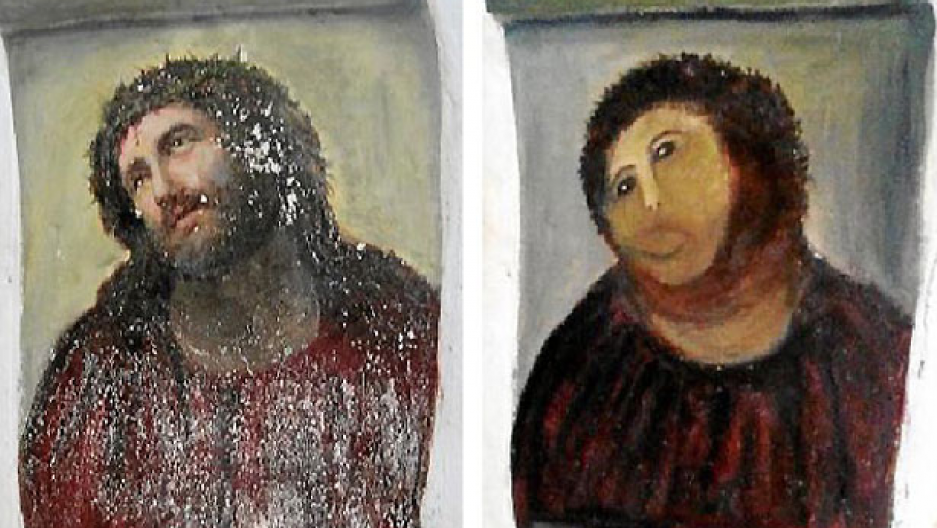 An elderly woman has unintentionally destroyed a valuable piece of artwork after she decided to 'restore' the painting herself.

The painting was a 19th century Spanish fresco titled “Ecce Homo” by painter Elias Garcia Martinez. It was donated to the Centro de Estudios Borjanos in Borja, Spain, by the painter's granddaughter, according to the Telegraph. The centro reportedly holds an extensive archive of regional religious paintings.

The woman, a neighbor of the church reportedly in her 80s, thought she would save the church both time and money by restoring the painting herself.

The Telegraph described the restoration as, "a botched repair where the intricate brush strokes of Martinez were replaced with a haphazard splattering of the octogenarian's paint. Years of carefully calculated depth of expression simply washed out by copious amounts of red and brown."

Juan María Ojeda, The councilman of Culture Borja, told Noticias de Navarra that the woman who attempted the restoration "had a hard life." He also added that is would be "very difficult" to recover the painting.

According to Yahoo News, the elderly woman reportedly realized she was ruining the painting and turned herself in to authorities. Culture councilor Juan Maria de Ojeda added, "she had gotten out of hand."