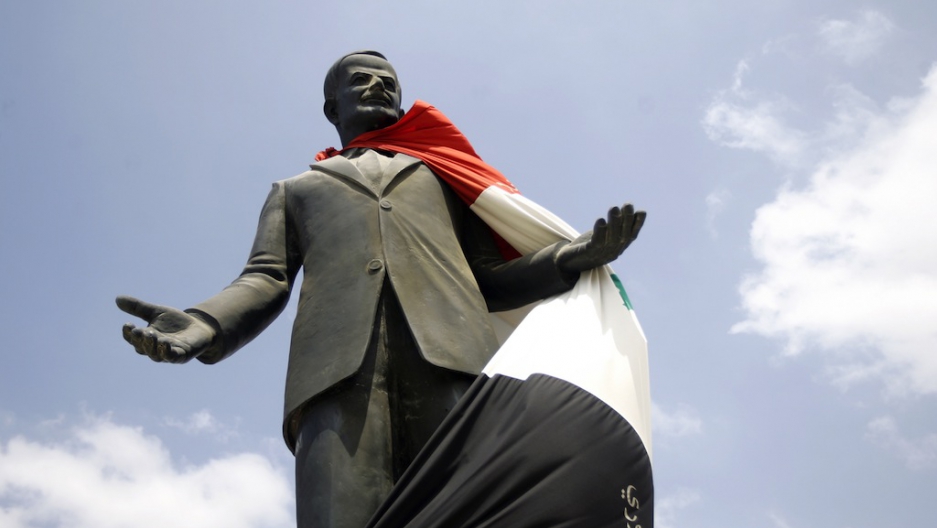 A Syrian flag hangs over a statue of the late president Hafez al-Assad on Aug. 30, 2011, near Homs. Alawites have ruled Syria since Hafez seized power in 1970.
Credit: Joseph Eid
Share

Persecuted during the Crusades, oppressed by the Ottoman Empire, and considered by some Muslims to be a heretic sect, Alawites constitute 12 to 13 percent of Syria’s estimated 22.5 million people. Despite their small size, this minority has ruled Syria for over 40 years.

Recent reports suggest sectarian violence has gotten so bad it has spilled over into Lebanon, which also has an Alawite community. Last night in a Sunni-Alawite skirmish in the Sunni district of Bab al-Tabbaneh and the Alawite area of Jebel Mohsen, at least 10 people were killed and over 100 injured. In June, 15 people were killed in the same area.

To understand who the Alawite are and what their role has been in the Syrian conflict, GlobalPost spoke to Marius Deeb, a professor in Middle East studies at Johns Hopkins School of Advanced International Studies. Deeb is a Syria expert and author of Syria’s Terrorist War on Lebanon.

This interview has been condensed and edited by GlobalPost.

The Alawite are a distinct religious and cultural group that began in Syria, but also has communities in Turkey and Lebanon. What is the social and economic situation of the Alawites in these countries?

There’s a big difference between Alawites in Lebanon, a tiny minority of about 1 million, and the Alawite minority in Turkey, probably around 12 to 15 million.

The Alawites in Turkey control the Ataturk party—a secular party. The head of it is Alawite. And they support the secularists. In Lebanon, Alawites are represented in parliament, but only by a few deputies out of 128. So the majority of Alawites are in Turkey, and a sizable minority in Syria, about 2.5 to 3 million people.

When Hafez al-Assad, President Bashar al-Assad’s father, seized power in 1970, the Alawites took over Syria. But they’re a minority that makes up only 12 to 13 percent of the population. How did they gain power?

They gained power through the military. They started a coup in 1963 when the Alawite were prominent, though not dominant. And in 1970 Hafez al-Assad ousted his rival and put him in prison.

They managed to control the intelligence services and the important units in the army. I mean, those who matter. You can have 20 generals sitting behind desks, but they have no power.

The Alawites fear a time when Sunnis takeover and persecute or massacre them because of what they have done. It’s a minority idea, how to defend themselves. That’s why they are so desperate and ruthless.

How is the Sunni-Alawite conflict reflected in Syria’s civil war?

In the beginning the opposition was non-violent. Demonstrators went to the streets in emulation of what happened in Egypt and Libya. They were peaceful and they believed in the universal principles of liberty and freedom.

But when the regime became violent the opposition armed itself and created the Free Syrian Army. Those who believed in nonviolence were cast aside. It has become a Sunni armed opposition versus the Alawite regime.

Are there, or has there been, a serious attempt to reconcile the two groups?

Yes. The whole idea of a secular party like the Baath is to have everybody in. It appeals to the Sunnis, Christians and Alawites. But it hasn’t worked out because there are no democratic elections. There is no participation of all the communities.

Did the Arab Spring bring the Alawites and Sunnis closer together or did it exacerbate the conflict?

If in the beginning President Bashar al-Assad opened up the system and had democratic elections and retired from power, reconciliation might have been possible. But this was not the course of action. So that’s why any attempt to reconcile has failed.

If Syria had an inclusive democratic process, would that stop sectarian violence between Sunnis and Alawites?

It’s a dream of the past and the future. One should be optimistic. But we know from other countries that when Sunni Muslims obtain power through elections they tend to elect brothers from the Muslim Brotherhood (who exist in Syria, Egypt, Tunisia, and elsewhere).

And they are not exactly democratic. They want to impose their will on others. That’s the fear.