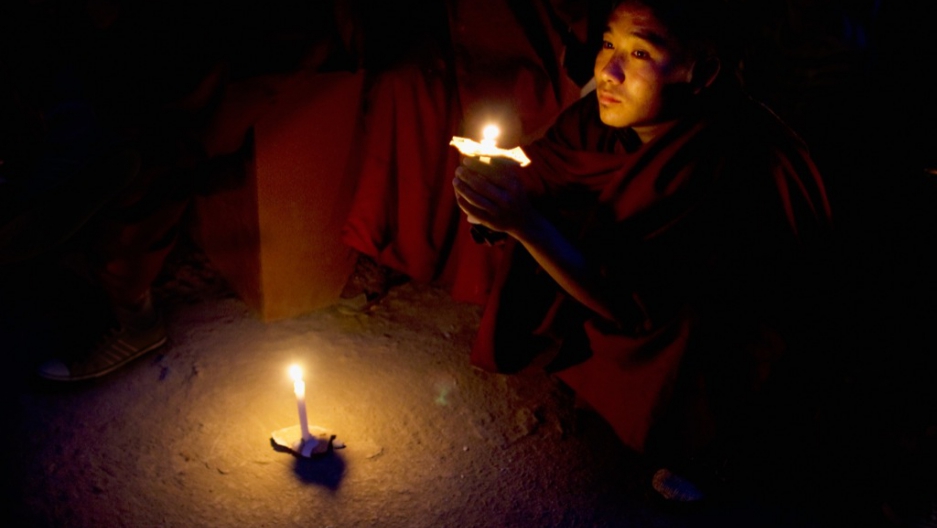 Once unheard of in Tibetan society, lighting oneself on fire has become a relatively common form of protest today. Since March 2009, there have been about 50 self-immolations in Tibet and ethnically Tibetan areas of China. Last week, Tibetan monk Lungtok, 21, and his friend Tashi, 20, from Ngaba county in Sichuan province became the latest to torch themselves in protest of China's repressive policies.

But, by most accounts, the repressive policies continue. Tibetan monks are still arrested and "re-educated." They are beaten and forced to denounce the Dalai Lama. They disappear.

Given the continuation of such brutaility, can we then say the self-immolations have failed?

Tenzin Dorjee, executive director of Students for a Free Tibet, doesn't think so, though he admits China has intensified its crackdown as a result of the self-immolations.

Dorjee says the extreme acts of protest have rallied disparate parts of the Tibetan diaspora around what he calls the "defining nonviolent movement of our time."

Here, Dorjee — a Tibetan born and raised in exile near Dharamsala, India — explains why he sees the spate of self-immolations as a success story above all.

GP: What, if anything, has changed as a result of these acts of protest?

The Chinese government has responded to the self-immolations in the same way it always responds to perceived threats to its absolute control over Tibet – by intensifying repression and trying to stamp out resistance. But what the self-immolations have shown is that Tibetans are slowly losing fear of the regime. If you are willing to light yourself on fire, you are saying to your occupier – your tools of oppression can no longer touch me; your mechanisms of torture and abuse no longer control me. In many ways, it is the ultimate expression of resistance.

At the same time, the self-immolations truly show how critical the situation is in Tibet and how new approaches are desperately needed by the international community to help resolve the issue. On the one side you have the Chinese regime with all the military power and control trying to crush the Tibetan population, and on the other hand you have Tibetans who have not only refused to give up but are more unified than ever. The self-immolations have resulted in a call for stronger, international diplomatic approaches by world governments including a multilateral forum for Tibet, akin to the contact groups that we have seen for Syria, Kosovo, etc. This multilateral forum offers the best opportunity for applying pressure on China to stop its abuses and to seek a genuine solution to the crisis.

GlobalPost Q & A: What does a trend of self-immolations tell us?

Given that China's repression has heightened, can we say the self-immolations are a failed tactic?

The Chinese government is responsible for creating the conditions that have led to the self-immolations in Tibet. Beijing has the power to remove the troops, withdraw the checkpoints, reduce the tensions on the ground, and end the self-immolations overnight. But instead they are exacerbating the situation by locking Tibet down. It is China that has failed in its 60-year campaign to subdue Tibet and assimilate Tibetan language, culture and identity into Chinese.

No one has the power to read the minds of those who self-immolated, but we know there has been an overwhelming call for freedom for Tibet and the return of the Dalai Lama to Tibet. Self-immolation is a tactic taken by people who have not yet resorted to violence as a means to overthrow their oppressor but who are desperate for the situation to change. The effect the self-immolations have had in Tibet is powerful beyond all expectations. They have ushered in a total and irreversible awakening of the Tibetan people, built unprecedented unity among the three provinces, and returned to Tibetans a proud cultural identity. They have unanimously rejected Chinese colonialism and fundamentally delegitimized China's rule over Tibet. They have turned Tibet into a burning issue for the Chinese government that they can no longer ignore.

They have also shifted the paradigm of activism and sacrifice. A friend of mine whose brother is in Chinese prison for joining a political protest recently spoke on the phone with her parents. The parents couldn't conceal their excitement over the phone, because their son (my friend's brother) was "about to be released from prison." I asked her when he was to be released, and she said, "In two years." The parents were saying to her: "Our son can at least return, and he'll be home in two years, unlike so many others who cannot return." The self-immolations have deepened the Tibetan people's capacity for endurance and thus increased the life and strength of the movement.

What will it take for China to change its ways?

There is one immediate step the world can take to reverse China's repressive policies: It's the formation of a "Friends of Tibet" contact group, like the Friends of Syria or the Friends of Kosovo groups, focused on resolving the Tibet crisis. Students for a Free Tibet and other groups have been calling for a multilateral approach to nonviolent intervention in Tibet, and it's encouraging to see the same appeal coming from Congressmen Frank Wolf and Jim McGovern in a letter they sent to Hillary Clinton last week. The letter urges the US government to work with other like-minded governments such as Canada, Germany, Czech Republic to start a public, multi-government group whose sole task will be to focus on the Tibet crisis and chart out a resolution that will last. At this point, the formation of such a group is one of the strongest ways to hold China accountable to its policies in Tibet.

More from GlobalPost: Tibetans in Turmoil, an in-depth series

There are many other forms of diplomatic censure that can be applied. In Myanmar, the American-led economic sanctions made a huge difference, though their impact was long underestimated. In other situations, travel bans have been imposed on officials of regimes abusing human rights. There are many practical ways that governments can pressure China to change its ways and this is where the grassroots public can make a difference by urging their political representatives to do something. It just takes political will and little bit of creativity on the part of those governments.

Although the media has reported on the self-immolations, it is hard to see why they haven't drawn more coverage. What's the best way to tell the story of the Tibetan struggle?

The real story is 6 million people locked in an epic battle — the defining nonviolent movement of our time — for freedom. We Tibetans are fighting for our survival and dignity, we want our basic right to self-determination recognized by the global community of nations. What is at stake is not just the freedom of Tibetans, but also the freedom of Chinese people. One of my Chinese friends and activists often says, "In order for China to be truly free, Tibet needs to be free." So they tell the story of everything that is wrong with oppression, everything that is wrong with the Chinese government, and heightens the urgency for the world to intervene.

The best way to tell this story is through success. If we can succeed in persuading and pressuring various governments such as Germany, Canada, the US, France, Norway, Czech Republic and others to form a multi-government coalition, a Friends of Tibet contact group, to address the emergency and begin the process of finding a real solution, that will be the victory story that could eventually bring the self-immolations to an end.