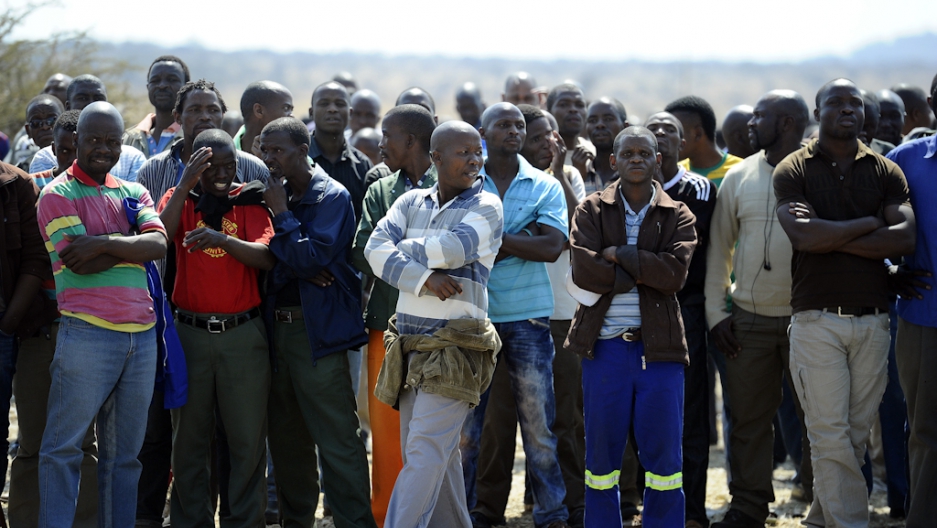 Striking platinium miners gather on August 20, 2012 at London-listed Lonmin's Marikana platinum mine, where police opened fire on hundreds of workers staging a wildcat strike on August 16. Platinum miner Lonmin said today it will hold a press conference with unions to urge workers to return to the job after an 11-day wildcat strike that has left 44 dead.
Credit: STEPHANE DE SAKUTIN
Share

A number of reports on the tragedy at the Lonmin Marikana platinum mine, in which 34 strikers were killed by police gunfire, have quoted workers who said a traditional healer, known in South Africa as a "sangoma," had given some of the men "muti" for protection.

The use of muti, or traditional medicine made from ingredients including plants and animal parts, is an important practice in southern Africa.

South Africans from all walks of life seek out traditional cures for ailments ranging from rashes to erectile dysfunction, as well as for magical purposes such as bringing good fortune in love and business.

South Africa's Sunday Times said a sangoma had carried out rituals on the hill where the strikers were gathered, and "dished out muti" to make the men "invincible":

"A mystery sangoma is believed to be behind the foolish courage displayed by striking miners during Thursday's deadly standoff. Undeterred by water cannons and tear gas, the miners crept through the bushes towards the police and charged straight into a heavy line of fire."

According to the newspaper, some locals believe that if not for the muti rituals, many more workers would have been killed.

City Press, another Sunday newspaper in South Africa, said a sangoma from the Eastern Cape had instructed the strikers to strip naked and stand in a single file to be sprinkled with herbs.

"The medicine man used a razor blade on some of the men, making small incisions on their foreheads before smearing a black, gel-like potion on them. These procedures, it is believed, were part of a process to prepare for battle: to make the men invincible against the enemy."

The men had reportedly turned to muti following the deaths of 10 people, including mineworkers and two police officers, in clashes during the week leading up to Thursday's shooting by police.

The Daily Dispatch reported today that the muti, a brown, drinkable substance, had made the strikers aggressive.

“After they got the muti people were so aggressive. They just wanted to fight. They felt so invincible,” Lonmin miner Bulelani Malawana told the Daily Dispatch.

The miners were told that when they confronted the police they must charge forward and not look back, Nothi Zimanga told the Dispatch. They were told that if they looked back, the muti would not work.

At the time, the two rival unions were fighting for control among workers at the world's biggest platinum mine, Impala Platinum (Implats), located near Rustenburg, northwest of Johannesburg.

The same unions, NUM and AMCU, were involved in the conflict between striking workers at the Lonmin mine, also near Rustenburg.