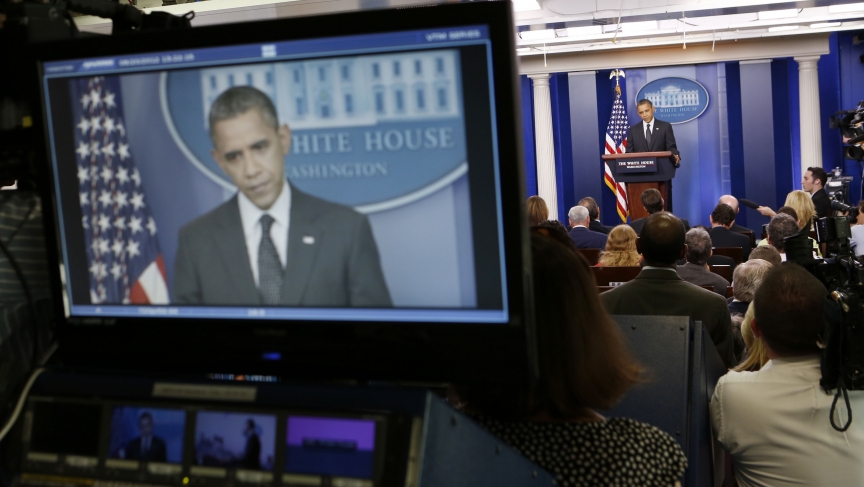 U.S. President Barack Obama is seen on a TV monitor as he speaks in the press briefing room at the White House in Washington, on Monday August 20, 2012. (Photo by Larry Downing/Reuters.)

President Barack Obama on Tuesday, addressing the White House press corps in a surprise move, repeated his calls for Syrian President Bashar al-Assad to step down.

But this time, his comments came with a new twist. Obama threatened direct military action against Syria if there was any indication of use or movement of the country's cache of weapons of mass destruction. American officials are confident the country maintains a stockpile of chemical weapons, but is less sure whether the country has biological weapons.

Administration officials clarified that they don't have a problem with movements to secure the stash, but rather large-scale movements that make them vulnerable to capture.

Amr Al-Azm, a professor at Shawnee State University in Ohio who opposes the Assad regime, said the United States is concerned both that Syria might use the weapons on its own people, but also that should they be moved, that they might fall into even worse hands, like Hezbollah or even al-Qaeda.

"The regime forces and the opposition appear to be, at best, from the regime's perspective, stalemated and at worse, the regime is actually unable to maintain its grip on power," he said. "Gradually losing this battle, they would resort to using these chemical weapons as a means to regain the initiative. That would be quite catastrophic."

In his comments, Al-Azm said Obama was probably seeking to appeal to a domestic political audience, as well as Syrians and even Israelis, who are nervous about the possibility of the conflict spreading.

Al-Azm said the threat of Islamic militants, from al-Qaeda and the like, in Syria at the moment is relatively low. But their presence is growing.

"It is that that is of concern to us, not just from the United States perspective, but also the Syrians as well. That would create a major problem for us, and we have Iraq as an example to look to," Al-Azm said.

One way to prevent that, Al-Azm, is to ensure the non-ideological Free Syrian Army is given enough support to quickly end the conflict, rather then let it slowly devolve into a quagmire.

There are already high level conflicts between the U.S. and regional governments, Al-Azm said, and there are even rumors of U.S.-Turkish coordination on a no-fly zone to be used in conjunction with a safe haven that has been established by the rebels in the northern part of the country, near Turkey. But until Monday, U.S. officials had been unwilling to publicly acknowledge even the possibility of military intervention.

"(Monday's comments are) extra. This is something they've noticed, something they've seen that's drawn attention," Al-Azm said. "They threw out this red flag ... this is going to be really, really bad for you and will have instant repercussions."