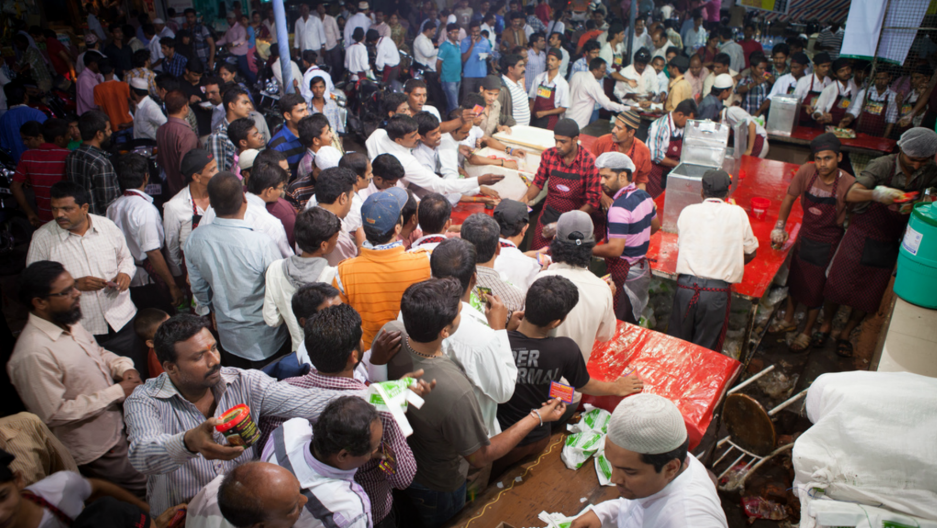 Crowds of Indians of all faiths crowd around the Pista House to buy some of the day's fresh haleem. (Photo by Joel Joseph.)

Across the world there are are foods we associate with religious holidays.

In the United States, it's probably Turkey on Thanksgiving. In London, you might eat hot cross buns for Easter, for example. In India, one of the most celebrated and popular religious dishes is a meat delicacy called haleem.

Although haleem is known as a dish for Ramadan, it is enjoyed by Hindu, Muslims and Christians alike.

At the Pista House haleem factory there are 12 enormous colanders of lamb meat, eight vats of clarified butter, called ghee, and a king-size bed sheet full of garlic blocking the path to the kitchen. Within minutes these materials are gathered put into production.

Every day during Ramadan, Pista House produces thousands of pounds of haleem, a delicacy that can best be described as a smooth meat porridge.

The Pista House kitchen has brick walls and dirt floors. There are about 20 cauldrons that stand little more than waist-high, each with a fire burning underneath it.

“Every day we use 20 tons of fire wood,” said Pista House owner Mohd Abdul Majeed. “This is haleem cooking for 10 hours, with wheat and meat. We’re mixing the raw material.”

First the wheat and the meat are boiled, until they form a kind of chunky paste. That paste is then moved into a separate set of cauldrons and they shake a giant bag of what looks like potpourri into the meat.

“This is our specialty," he said. “We use rose petals, clove, cardamom, green chillies, coriander.”

Then about 20 gallons of pale yellow ghee, the clarified butter, is poured into the mix and two men spend the next two-three hours rhythmically mashing the meat with giant wooden poles until it becomes totally smooth and thoroughly infused with the famous Pista House flavor.

Haleem is originally an Arabic dish, brought to Hyderabad by the immigrants of Yemen, Iran and Afghanistan.

Majeed said he first tried haleem on a trip to Saudi Arabia 20 years ago during Ramadan. He was very impressed with the dish.

“It has very good energy and proteins; it’s very very rich,” he said.

The high calorie haleem is the perfect way for Muslims to break their Ramadan fast each day, which is why Pista House is in constant hustle mode during Ramadan: every major city in India needs its haleem by sundown.

“We send haleem to the airport at 2 o’clock, then onto cities in India, to Delhi, Bombay, Chennai, Calcutta and Bangalore. We have 346 outlets in Hyderabad and Secunderabad,” Majeed said. “We actually had 30,000 orders from the US, but we don’t have a license for that. We hope to send haleem to the U.S. in 2013.”

Even though haleem is considered a predominately Muslim food, Majeed explained it’s one of those things that bring people together.

"This is not for any religion, this is a dish for human being,” he said. "In India, in Hyderabad, all peoples eat haleem ... Hindus, Christians, Muslims no problem.”

And it’s true. As the sun is setting and Pista House is preparing its last batch of the day the hundreds of men gathering outside Pista House’s main branch next door are a mix of Hindus and Muslims united in their common love of haleem.