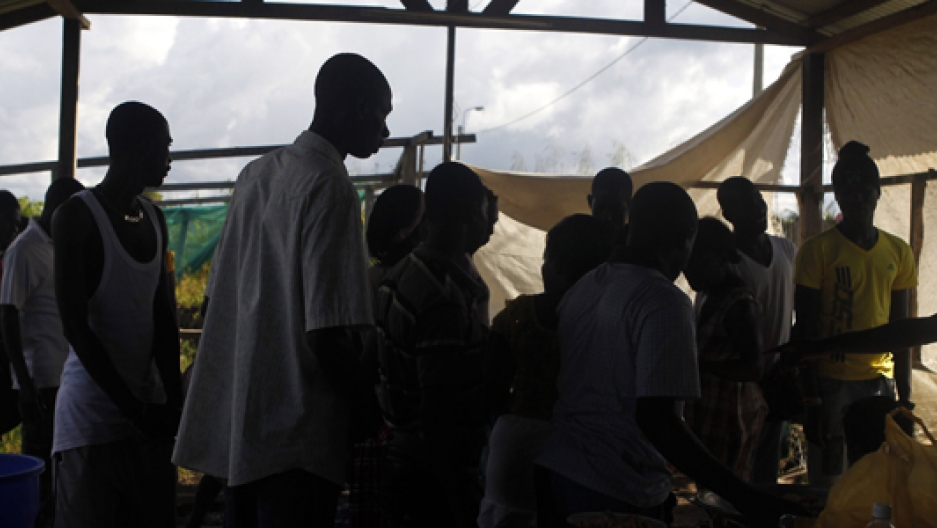 Haitian immigrants wait to receive food at a shelter in Inapari, a Peruvian town that borders Brazil. (Photo by Mariana Bazo/Reuters.)

Just after dawn in the Peruvian town of Inapari, a few Haitians prayed by the Acre River in the Amazon. They shared a book called "Songs of Hope."

Ahead of them, just past the muddy river, stretches Brazil.

"This is our problem," said Wisnel Amisial, one of 100 Haitians stuck in this quiet border town. "Brazil still hasn't accepted us, still hasn't given us visas. But we are still waiting, with hope."

Amisial says life in Haiti is hard. He's traveled through four countries to get here. More than 4,000 Haitians have moved to Brazil since the devastating earthquake there in January 2010.

Brazil is now the world's sixth largest economy, and it's struggling to create an immigration policy. It's been alternately closing and opening its borders to Haitians as it tries to balance humanitarian concerns with a selective approach to migrants.

Meanwhile, hundreds of Haitians wait on the border.

"We came here more than two months ago," Amisial said. "But we don't like it here. We do not live well here."

Most of the Haitians in Inapari are bunking in an empty government building.

"This is the house where we live," said Junior Saint Jean.

It’s a few bare rooms where the migrants sleep in rows on the floor. Rice and bananas cook over a fire in the overgrown yard.

The Haitians say they paid smugglers more than $3,000 to get here. They were promised it would be easy to go to Brazil once they arrived. Now, they tell relatives not to come.

"Because in the 21st century, human beings shouldn't live like this," Saint Jean said. "I know what rights human beings have."

Damiao Borges, an official for a government-run human rights agency, shows up to check on the migrants. He asks how the migrants are doing. Saint Jean tells him they feel desperate.

"The government of Brazil doesn't want to let them come in anymore," Borges said. "This is a big problem."

In January, Brazil announced it would only admit 100 Haitians and that they had to fly directly from Port-Au-Prince, Haiti's capital. The idea was to attract more professionals and fewer unskilled immigrants, and to discourage people from taking the dangerous land journey.

But Haitians kept showing up.

"After that, Brazil let many more come in," Borges said.

He said 130 more showed up. They were stuck at the border until Brazil relented and let them in. Now, there are 102 more Haitians waiting for their chance.

It's unclear whether Brazil's government will make another exception for this group. Saint Jean and the others say they're hungry and depressed, and long to start their new lives.

"I want to work and finish my studies," Saint Jean said. "I don't want my daughter to go through what I've been through. That's why I want to make a lot of sacrifices so she doesn’t have to suffer like I have."

Some say letting Haitians work in richer countries could be the best way to help their country rebuild. The World Bank estimates the Haitian diaspora, mostly in the United States, sent home $1.5 billion in 2010. That's more than what the U.S. has contributed in post-quake aid.

"As soon as they arrive, the companies are calling me," he said. "They call me from Sao Paolo, from Rio, and I send them everywhere. There's work for everyone."

There are jobs to prepare for the World Cup in 2014. But work isn't the only draw for the Haitians. Brazil has a large black and racially mixed population. Saint Jean says they won't have to deal with the kind of racism they've come across in Peru.

"Last night there was a soccer game and we went to watch it on TV at a restaurant," he said. "When the owner saw five or six of us Haitians, she turned off the TV. That made me very sad."

"We all know that our country's favorite soccer team is Brazil," the man said.

Inapari Mayor Celso Curi says Brazil's mixed message has become a burden for his town of 1,200. Every time Brazil closes its border, the town's population swells with Haitians. When they're allowed to cross, more take their place.

"The first time we gave them food and shelter, and the second time too," he said. "But you can't help forever. We need to focus on other things."

Water only runs in Inapari three hours a day. In the evening, many Haitians bath in the Acre River, in the middle of the border that separates them from Brazil. For a few moments, this border seems like just another river.