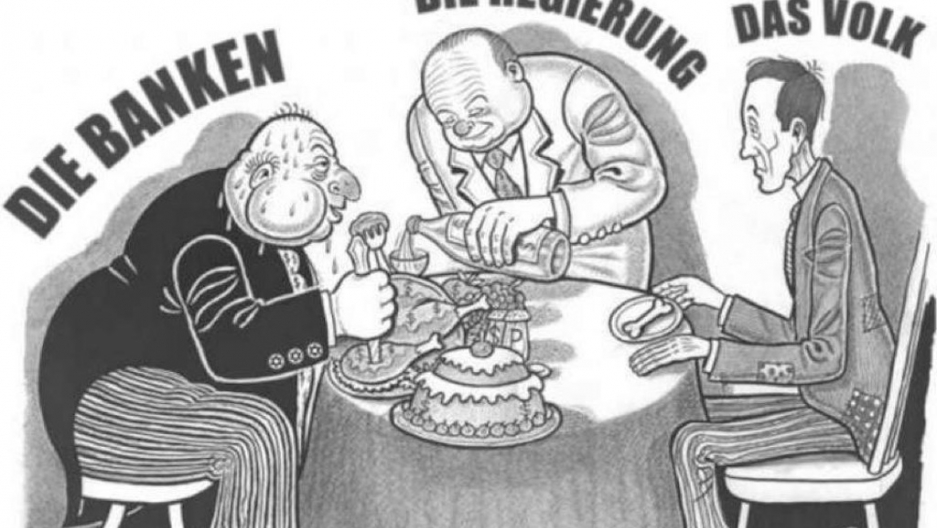 A right-wing Austrian politician is in hot water for posting this cartoon on his Facebook page.
Share

An anti-Semitic cartoon posted on Facebook by far-right Austrian politician Heinz-Christian Strache has ignited criticism and anger from the Jewish community and politicians.

The cartoon features a caricature of a banker with a hooked nose and Star of David cufflinks, and has been likened to propaganda used by Nazis in the 1930s by Austrian Jewish leader Oskar Deutsch, BBC News reported.

"It is not a coincidence that a caricature of Jews, similar to the ones in 'Der Stuermer' in the 1930s and 1940s, appeared on the Facebook page of Freedom Party leader Mr Strache," Deutsch said, referring to a newspaper published by the Nazis.

The drawing was posted Saturday with a comment criticizing "EU banking speculators" for taking Austrians' tax dollars, according to BBC.

A slightly amended version of the cartoon has since been reposted on Strache's page which omits the cufflinks and changes the shape of the banker's nose, the Associated Press reported.

Yet the cartoon has still drawn ire from other politicians as well as Jewish leaders.

"It's about time the Freedom Party finally did something against the incendiary and discriminating tones within the party itself," the secretary of the conservative People's Party urged Monday, Agence France Presse reported.

Petra Bayr, a deputy of Austria's socialist party, said she was "deeply shocked" by these "new anti-Semitic and Islamophobic verbal slips" from Strache, according to AFP.

However, both Strache and the Austrian Freedom Party have denied that the cartoon is anti-Semitic.

The politician said he was not targeting Jews, but rather, was criticizing "greedy bankers" regardless of their background, the AP reported, and the party issued a statement arguing that critics had "obsessively" interpreted the banker‘s nose as looking Jewish, Europe Online reported.

A lawyer in Vienna said he plans to sue the Party for holocaust denial, which is a crime in Austria, according to the BBC.

More from GlobalPost: Iran linked to 9 other plots against Jews: NYPD