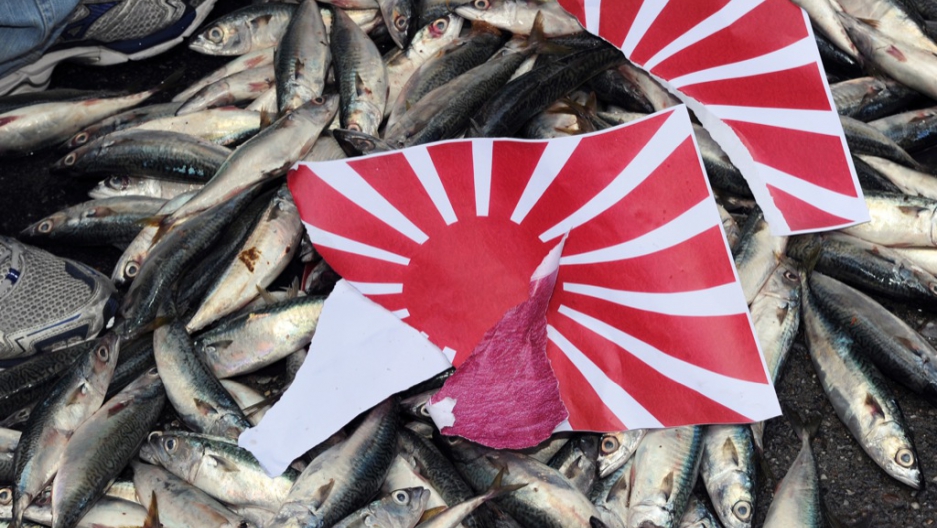 A torn apart Japanese 'Rising Sun' flag is placed on dead fish during a demonstration in front of the Japan Exchange Association over the continued diplomatic Senkaku Islands dispute between Tokyo and Beijing.
Credit: SAM YEH
Share

A group of Japanese activists who raised the country's flag on the Senkaku Islands have sparked protests across China over the hotly disputed territories.

Though they were denied permission to visit the islands, 10 Japanese—five of whom are reportedly conservative local assembly members—landed on Uotsuri, the largest in a small archipelago of the islands, Sunday morning, BBC News reported.

"We hope to convey both to China and the Japanese people that the Senkaku are our territory," Toshio Tamogami, a leader of the Japanese group, said before they set sail on Saturday, Reuters reported.

Thousands of Chinese, who refer to the Islands as Diaoyu, protested in the streets of Shenzhen, Guangzhou, and other cities in an outcry for Japan to leave the islands in the East China Sea, according to BBC. There were also protests held in Hong Kong.

“The Japanese side should properly handle the current issue and avoid seriously damaging the overall situation of China-Japan relations,” ministry spokesman Qin Gang said in a statement.

Last week, a group of Chinese activists ignited the tensions between the two nations when they sailed to Diaoyu on August 15 and planted both Chinese and Taiwan flags, Bloomberg Businessweek reported.

Taiwan also lays claim to the disputed islands, which are located in a vital shipping lane and surrounded by gas deposits, according to BBC News.