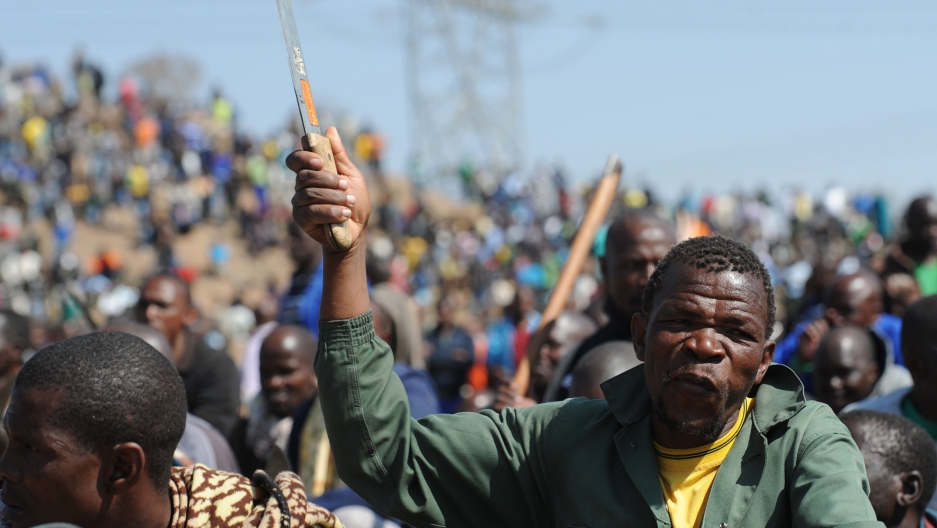 A miner holds up a machete during a strike calling for increased wages at a platinum mine in Marikana on Aug. 16, 2012.
Share

JOHANNESBURG, South Africa — What began as a straightforward protest over wages, a common grievance in South Africa, ended Thursday in an unexpected eruption of deadly violence.

And it may just continue in the form of a tumultuous political year.

Reacting to the angry mob of striking mineworkers outside the Marikana platinum mine, police opened fire with automatic rifles and pistols, killing 34 people and injuring 78 more.

Shocked by the brutality at the Lonmin-owned mine, and especially by graphic video footage broadcast on South African television, South Africans are calling it the “Marikana massacre.”

The South African Institute of Race Relations went so far as to compare it to the infamous Sharpeville massacre, when apartheid police killed 69 black protesters on a day in 1960 that is still commemorated every year.

That might be a stretch. For one thing, most of the police involved in Thursday’s shooting were black, and they weren’t acting on the orders of a minority regime.

Analysts say that, instead, the shootings represented a collision of some of the country’s most pressing issues — poverty, police brutality and the resentment felt by many South Africans that, since the end of white minority rule, progress here has been slow.

“What we’re seeing is the accumulation of a perfect storm in South Africa,” said Daniel Silke, an independent South African political analyst.

Silke pointed to a host of contributing factors: political infighting, a platinum industry suffering in an economic downturn, and battles between rival labor unions, which are all taking place in a region with high levels of poverty and inequality.

“I think the real issue is whether this is potentially a harbinger of a much more vigorous and perhaps more violent contestation that could continue into years ahead,” he said.

The tragedy puts South African President Jacob Zuma in an uncomfortable spotlight at a time of tense political maneuvering within his own political party. An important meeting of the African National Congress leadership is planned for December in Mangaung. At a similar meeting in 2007, former South African President Thabo Mbeki was ousted as party leader in favor of Zuma.

Although Zuma cut short a trip to Mozambique on Friday to visit the mine, where he called for an inquiry into the deaths, some felt it was too little too late.

“Before yesterday, nothing was done or said by the political leadership, from the ANC or Zuma or his ministers. There has been a huge political gap in trying to intervene in this situation,” said Prince Mashele, director of the Pretoria-based Center for Politics and Research.

“I think the volatility of the situation was underestimated by the general public, and in particular by politicians as well as by law enforcement.”

In the week before Thursday’s shooting, 10 people were killed at the mine — including two police officers. The clashes were sparked by a feud between rival labor unions seeking control of the workers, who had launched a strike, without the permission of their unions, demanding wages be tripled.

The Implats and Marikana mines are both located near Rustenburg, some 60 miles northwest of Johannesburg.

In South Africa, protests all too commonly turn violent, and police readily “shoot to kill” when threatened, a policy publicly supported by the country’s former national police commissioner.

Idasa, an institute for democracy in Africa, said the shooting at Marikana was “a lesson in the danger” of resorting to violence.

“For some time now an increasing number of South Africans have begun to turn to violence too easily, whether they are in political formations, unions, the public service or merely citizens,” the institute said in a statement.

The incident at the mine is also another blow to South Africa’s faltering mining sector and lackluster economy, which last year saw growth of just 3 percent.

Shares in London-listed Lonmin have dropped on news of the turmoil and concerns about the mining company’s ability to meet production targets.

Economists are now warning that South Africa’s mining industry could take a longer-term hit, with growing investor concern about risk in the country.

All of this could further imperil Zuma’s presidency.

“I think this coming period will be a very volatile one in South African politics,” Silke said.