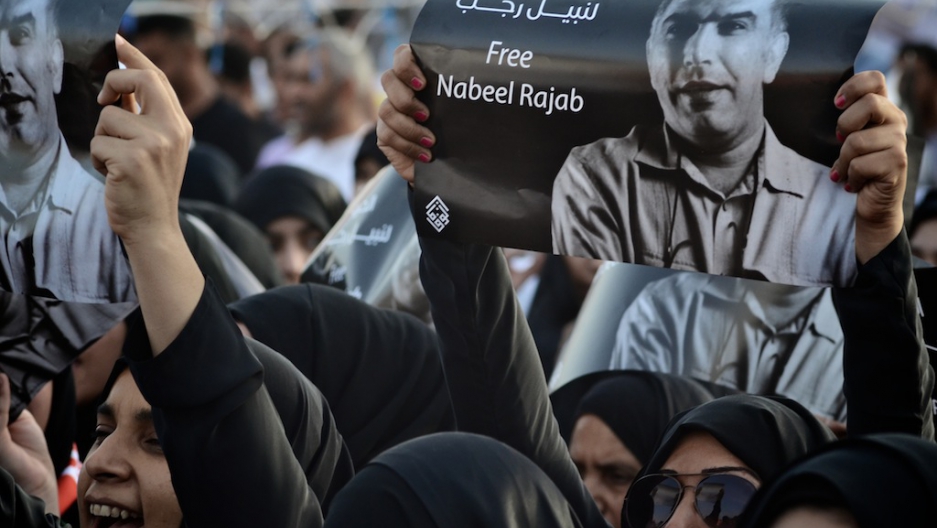 Bahraini Shiite Muslim women hold portraits of opposition prisoner, Nabeel Rajab during a demonstration in the village of Karzakan, South of the capital Manama, on May 11, 2012 to demand release of jailed opposition activists.
Credit: Mohammed al-Shaikh
Share

Though the Arab Spring has brought international media attention to Egypt, Tunisia, Libya, Yemen and most recently Syria, government violence against protesters in the island kingdom of Bahrain has largely been left out of the spotlight.

Activists maintain that the lack of attention has to do with Bahrain's strong alliance with both the US and Britain, which it maintains as a strong Islamist dictatorship whose Gulf neighbors fear democracy could become contagious.

"Bahrain is forgotten now, and it was forgotten when the Arab Spring started, because what is happening in Bahrain is not the result of the regime's rule only. It is the result of the joint collaboration, interests and political unity of more than one country," said Lamees Dhaif, a journalist and activist, in an interview with CNN earlier this week.

The sentencing of Nabeel Rajab, one of Bahrain's top human rights activists, to three years in prison for participating in an "illegal gathering" illustrates the level of government repression of burgeoning political dissent. Since the 2011 uprising, the ruling Al Khalifa family of Bahrain has led a systematic crackdown on protests and activism, including using force against protesters and journalists. And the West has kept mostly quiet.

"The court's decision is a dark day for justice in Bahrain that further questions the independence of the judiciary," said Hassiba Hadj Sahraoui, Deputy Middle East and North Africa Programme Director at Amnesty International, in a press release from the international rights organization, which has called Rajab a "prisoner of conscience."

Other rights groups have also condemned the three-year sentence, saying it violates Rajab's right to freedom of expression, and 17 members of the US Congress sent a letter to King Hamad bin Isa al-Khalifa expressing concern at Rajab's arrest and prosecution.

Dhaif explained, "Bahrain's allies (Great Britain and the United States) do not want to interfere in what is taking place because Bahrain has been a good ally for them in the region. The Gulf Cooperation Council countries (which besides Bahrain include Kuwait, Oman, Qatar, Saudi Arabia and the United Arab Emirates) also cannot allow Bahrain to have more democracy and freedom because it will pressure other countries to do the same, and they do not want that. So, basically Bahrain has not been forgotten ... but, in fact, it had been deliberately wiped out from the media coverage for political reasons."

A recent editorial in The Independent by Fatima Kanji also spoke to these issues, and went into great detail about just why the friendly diplomatic relationship between the Bahraini government and the West continues despite testimony in Congress on the atrocities committed by Bahrain — and proof that other regimes (Saudi Arabia and the UAE) have sent in surrogate troops at the request of the monarchy.

The US’s Deputy National Security Advisor Denis McDonough visited Bahrain in June consulting on issues of ‘mutual concern’, with McDonough stressing the importance of the US-Bahraini partnership. Bahrain has also been honoured with visits from the then Defense Secretary Robert Gates as well as Mike Mullens, the Chairman of the Joint Chiefs of Staff.

The strategic interest of Bahrain has ensured that the West has been largely tolerant and supportive of the Bahraini rulers’ actions. Bahrain’s close relationship with neighbouring OPEC countries, including Saudi Arabia, a key ally of the US, has contributed to Western friendliness.

Some of the "issues of mutual concern" could have to do with the US being Bahrain's largest weapons supplier, to the tune of "$53 million in weapons and other equipment," according to Kate Gould of Foreign Policy in Focus, who in an April article compared the Western media blackout and diplomatic hypocrisy about Bahrain to the symbiotic relationship between Russia and Syria.

Rajab's sentencing follows the life sentence received by his friend and fellow activist Abdulhadi Alkhawaja last year, which also stirred a modicum of attention from the global community.

Kanji said that President Obama expressed his concern at the treatment of Alkhawaja, although he didn't ask for his release. In June, 28 countries issued a joint statement through the UN, which Human Rights Watch called "an important step" because it "put the government of Bahrain on notice."

It's not clear if the government of Bahrain noticed, and the media blackout in the West has continued.

For more of GlobalPost's coverage of the protest movements in North Africa and the Middle East, check out our Special Report "The Voice and the Veil: Egypt's Revolutionary Women."