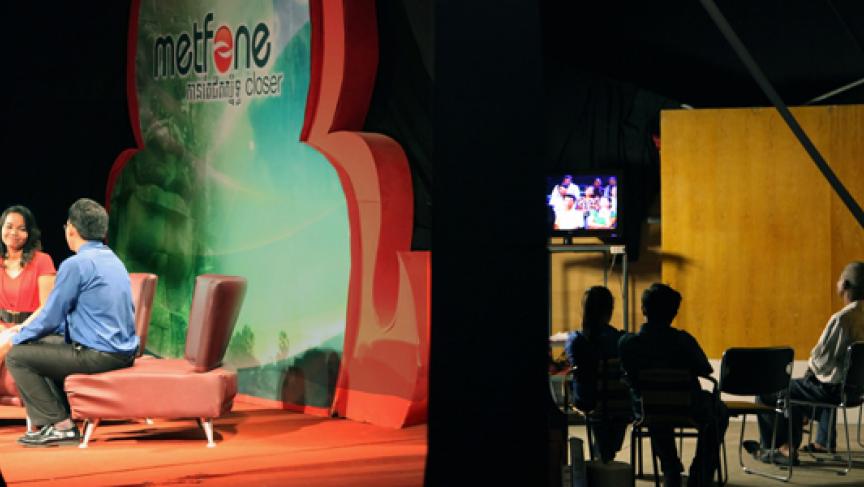 A flimsy stage wall is all that divides Moung Ramary and the father she has never met (second from right) as she talks with the host on stage. (Photo: Brendan Brady)

Share
Latest Editions TV Show Reunites Families Split Apart by Khmer Rouge By Brendan Brady â?? August 17, 2012 â?? Post a comment In 1975 the Khmer Rouge took control of Cambodia and began a four-year experiment in social reordering. It forced the entire population onto rural collectives. To destroy traditional bonds of authority, the Khmer Rouge also forcefully split families apart. Within four years, some two million Cambodians perished — a quarter of the population. For those who survived, some were never able to find their missing loved ones. Now, a Cambodian reality show is reconnecting estranged family members — and televising their dramatic reunions. The show is called "It's Not a Dream". It encourages viewers to send in their stories of missing loved ones. Some of those who write in get their stories read on TV. A lucky few are reunited with their families — in front of a live audience. It's a gimmick, but that is not a problem for Moung Ramary. "I saw the program on TV that finds lost family members, many of the families they reunite are so excited," she said. Ramary, 33, lives in Phnom Penh. In the 1970s, the Khmer Rouge forced her parents to marry. After the Khmer Rouge fell, her father left her mother, who was pregnant. So she has never met her father. "I want to meet him even if he is sick or poor. I want to have the chance to offer him my love and whatever I can," Ramary said. It took the producers of "It's Not a Dream" a few months to track down Ramary's father Sokhem. Then one night, she finally got to meet him: on television. When Ramary arrived at the studio, she was whisked away to a waiting room. Producer Prak Sokhayouk didn't want to risk Ramary bumping into her father backstage. "We separate them and we also arrange different times for them to arrive here," Sokhayouk said. "So we make sure they won't meet before the time we let them meet." Ramary's father comes in with one of his daughters from his current marriage. He is in his 60s and in poor health. On stage, the host asks Ramary about her childhood and the hardships she and her brother endured. Her father sits on the other side of a flimsy divider, watching her on a live video feed. Ramary's brother is also on stage. And the host asks them if they are ready to meet their father. Sokhem emerges from backstage. According to Cambodian tradition, Ramary and her brother prostrate themselves before him. And he falls to his knees to embrace them. "I'm so happy, father, you're alive," Ramary said. It is a moving moment, just the kind that Prak, the producer, tries to engineer. She said you have to be careful not to drag it out. "I'm very worried about the emotion. Even it's real, but when we try to talk it longer and longer, it will make the story not really good," she said. But not everyone appreciates these dramatic effects. Youk Chhang is director of the Documentation Centre of Cambodia, an NGO that researches Khmer Rouge history. Chhang lost much of his family during the Khmer Rouge's reign. He said he wouldn't go on this sort of TV show. "I would not want myself [to] go there and cry. I have cried for 30 years so I don't have to go there and cry again in front of the TV camera and tell that, oh! I lost my sisters and so and so," he said. Chhang said he appreciates that the program helps bring families together, but he thinks it is more about entertainment than national healing. Sokhayouk said that while she is trying to create good television, she continues to be touched by the stories. "It's not only a fairy tale that we used to hear but it is [a] true one for every family. And when we see a reunion on stage, even for me, I cannot stop crying," she said. As for Ramary, she appreciates what the show did for her, but she is now trying to connect with her father in a more natural way. She has begun visiting him on weekends to get to know him, away from the cameras.