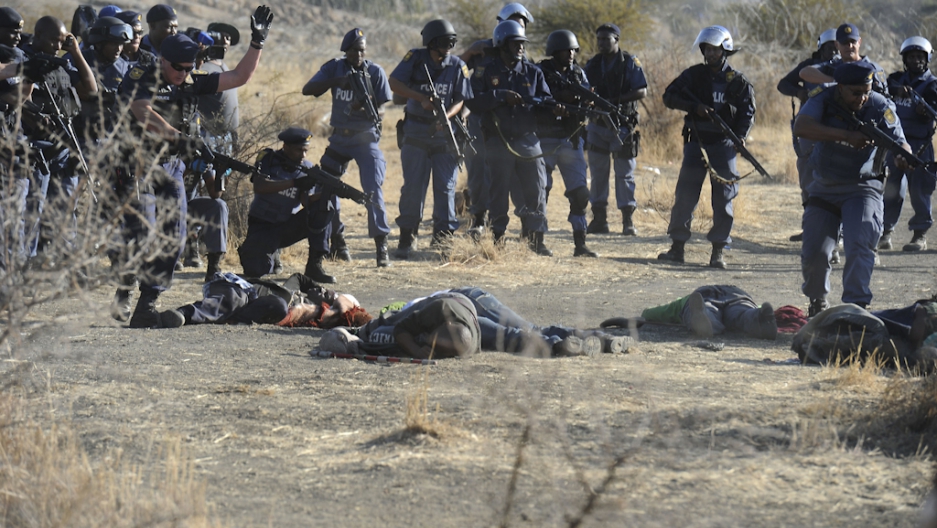 Police surround fallen miners after they opened fire during clashes at the Lonmin Marikana platinum mine near Rustenburg, South Africa, on August 16, 2012. Hundreds of workers armed with machetes, sticks and metal rods had gathered on a hillside near the mine, defying police orders to disperse. Several people were lying on the ground, some bleeding from wounds, after the crowd fled, according to an AFP reporter. Police say at least 30 people were killed.
Credit: -
Share

JOHANNESBURG, South Africa — Police officials say 34 people were killed and 78 injured in clashes between police and striking workers at the Lonmin Marikana platinum mine, in what has been described as a bloodbath.

Witnesses said police opened fire on the workers, who were mostly armed with machetes and clubs, on Thursday near the mine. Police had reportedly used tear gas and water cannons in effort to get the striking workers to retreat.

“What happened is that there were a lot of people who were injured and the number keeps on going up," police minister Nathi Mthethwa said in an interview with South African radio.

The National Union of Mineworkers said 36 people were killed, citing on-the-ground reports from its shop stewards.

"The militant group stormed toward the police, firing shots and wielding dangerous weapons," she said at a news conference.

Some 260 people have been arrested on charges related to the violence.

The Marikana mine has been the site of a violent turf war between rival unions. In the past week, 10 people including two police officers had died in clashes at the mine.

An estimated 3,000 striking workers had gathered to protest on a hill near the mine in Rustenburg, about 60 miles northwest of Johannesburg, demanding more pay.

South Africa is the world's biggest platinum producer, accounting for three-quarters of the world's known supplies of the precious metal.

London-based Lonmin said in a statement: “It goes without saying that we deeply regret the further loss of life in what is clearly a public order rather than labor relations associated matter."

The Johannesburg-based South African Institute of Race Relations (SAIRR) compared the shooting at the Marikana mine to the Sharpeville massacre in 1960, when apartheid police fired on black protesters, killing 69 people.

"[E]ven if the police were provoked or shot at during yesterday's incident, or were angry at the killing of two police officers in the days before, no disciplined and properly trained policeman would shoot into a crowd. Yesterday's incident was a disaster waiting to happen," a statement from the institute said.

"There is also evidence of their continuing to shoot after a number of bodies can be seen dropping and others turning to run. This is reminiscent of the Sharpeville massacre in 1960."