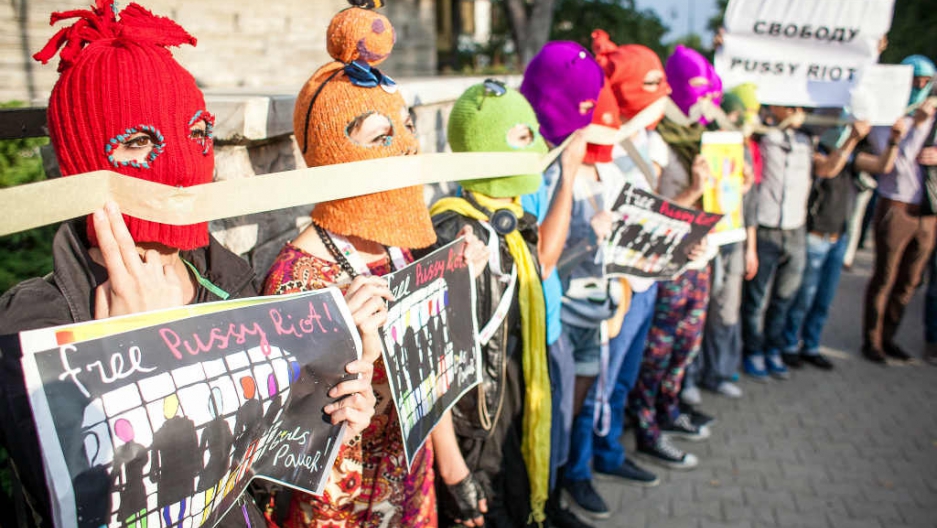 Supporters of the Russian punk band 'Pussy Riot' wear masks and hold placards demanding their freedom as they protest in front of of the Russian embassy in Warsaw.
Credit: Natalia Kolesnikova
Share

In Russia, anti-Putin punk protest group Pussy Riot has been charged with hooliganism.

But what is hooliganism?

GlobalPost spoke to Malynne Sternstein, Associate Professor of Slavic Studies at the University of Chicago.

Author of Will to Chance and Czechs of Chicagoland, Sternstein studies the intersection between art and literature, film and politics.

The interview has been edited and condensed by GlobalPost.

What is the legal definition of hooliganism?

Lenin once declared that "hooligans" should be shot on the spot, along with murderers and tsarists.

Ethically, I like to think of "art activism/hooliganism" as any act perpetrated against the state and on the very face of the State. (That is why I'm so curious to know what the detained members of Pussy Riot actually said in the Russian.) So I think of graffiti as art, and hooligan art at that. These behaviors can, of course, be more or less "professionally" done, but I don't see a difference between Banksy and a tagger. The state is the canvas. Hooliganism for me is always "performative," done publicly, even though the perpetrators may be disguised.

It has been for quite a while. We could even stretch it back to Diogenes the cynic, who would urinate and defecate in public, behave rudely and crudely, and show no respect for social hierarchies. It could be said Diogenes was provoking and questioning the regnant order.

I think in repressive regimes — and heck, what regime isn't repressive — artistic actions that have any link with a political agenda have flown the hooligan flag—provoked and pushed the limits of what is "legal," or acceptable. I'd be hard pressed to think of artistic protest that didn't involve "hooliganism."

How does it relate to freedom of expression?

That's tricky. The term "hooligan" and therefore "hooliganism" wasn't coined until the late 19th century, in England. It was quickly circulated, however, and found its way to late imperial Russia.

I think since there was such a statute on the books, and since people were being arrested for infractions to the law (hooliganism being an urban "blight"), there have been artistic attempts to harness the power of the law against itself.

Once the hooligan law was on the books, though, certainly many artists were aware of this and styled themselves as hooligans. It could be said the Russian avant-garde did so. The Cubo-Futurists prior to 1917 painted themselves, wore odd clothing and shouted in public to oppose bourgeois tastes and sensibilities. But I think it was only at the point when states made it clear that the right to free speech and expression was something they subscribed to that the dissident minority understood they were operating hypocritically and that the way to be a dissident artist was to expose that hypocrisy.

Hooliganism was used as a charge against Plastic People of the Universe in Czechoslovakia. Because it was so broad and vague, the statute was an easy way for the state to get rid of its "reprobates" such as Vaclav Havel.

Why is punishment for hooliganism so extreme?

Again, I think because what states count as hooliganism really points to what they worry most about — delegitimization of their power, exposure of hypocrisy. The thing about the law against hooliganism, in any state really, is that it is  so capacious and so interpretable. I don't think that's an accident. I don't mean to sound like a conspiracy theorist, but I think anti-hooliganism statutes are so open ended to allow states self-preservation.

Where is hooliganism used most frequently as a charge? In former Soviet countries?

Yes, definitely, and also former Soviet satellites. But the charge is also used often in China and Iran.

I should add that the irony of all this is that in the states where hooliganism is the way those in power prosecute and criminalize such acts of dissidence, the activist-artists actually gain more international recognition and their message is heard by more people. How many people had heard of Pussy Riot before?