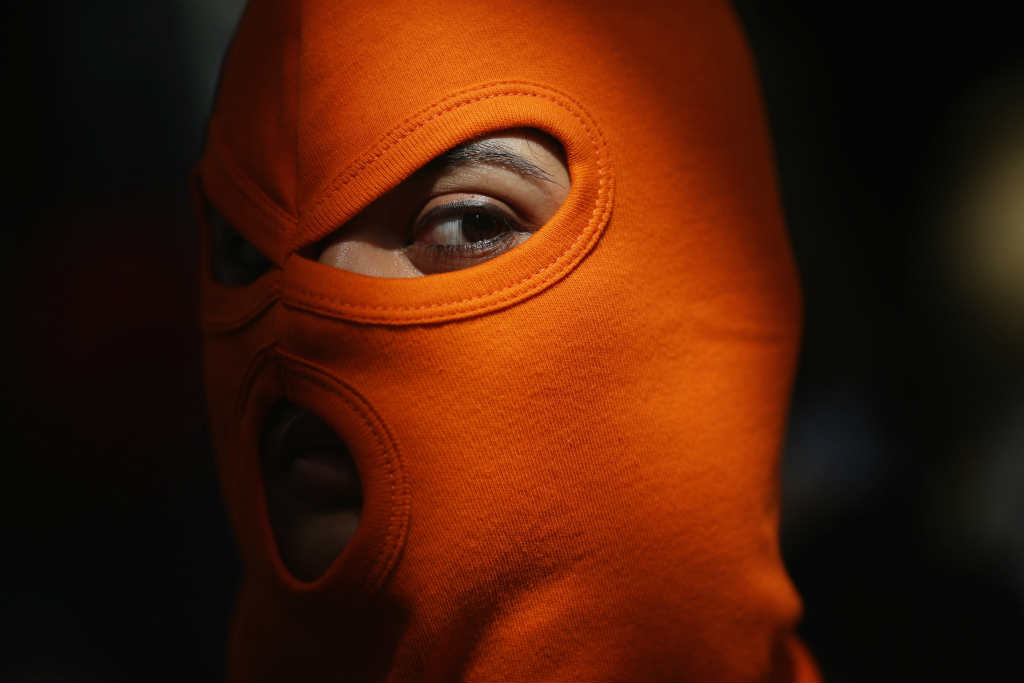 Vladimir Putin might not like Pussy Riot. In his defense, they aren't his biggest fan either. Still, even without Putin's support, the band has plenty of fans. Scores of musicians, celebrities, and even Instagram-ers have come out in support of the punk protest group. Here’s a look at some of Pussy Riot's biggest fans.

Madonna recently traveled to Moscow for a concert and the opening of a new fitness club, but she didn’t stop there. She turned her concert into a show of political support for the punk protestors. Madonna even stripped during the concert, taking off her shirt to reveal the words “Pussy Riot” written on her back.

"I am against censorship and throughout my whole career I've always promoted freedom of expression, freedom of speech. So obviously, I think that what happened to them (Pussy Riot) is unfair,” Madonna told Reuters. “I think art should be political. Historically speaking, art always reflects what's going on socially. So for me, it's hard to separate the idea of being an artist and being political."

Russia was none too pleased with this turn of events. Deputy Prime Minister Dmitry Rogozin even called Madonna a "whore" for vocally supporting Pussy Riot.

In Finland, Bjork is also declaring her support for Pussy Riot. During a concert in Helsinki, she dedicated her single “Declare Independence” to the band.

On Facebook, Bjork wrote that she "invited some of pussy riot members to join me onstage in declare independence but they didnt get visas so i dedicated it to them instead !”

Bjork even published a statement in defense of Pussy Riot, in which she declared that “as a musician and a mother i would like to express i fiercely dont agree with them being put to jail because of their peaceful protest performance. they are currently standing trial and facing seven years in prison for this.”

Watch the dedicated performance below:

Interestingly enough, former Beatles member Sir Paul McCartney has actually met Putin. He had tea at the Kremlin in 2003. McCartney might not be able to look forward to another invitation, however, after his public support of a group that seeks "to rid Russia of Vladimir Putin."

McCartney wrote a letter in support of Pussy Riot, stating: “Many people in the civilized world are allowed to voice their opinions and as long as they do not hurt anyone in doing so I believe this is the best way forward for all societies. I hope you can stay strong and belive that I and many others like me who believe in free speech will do everything in our power to support you and the idea of artistic freedom.”

For a look at the Beatles' arguably anti-revolution masterpiece, check out the video below:

Canadian electro-punk musician and performance artist Peaches is also feeling distinctly pro-Pussy Riot. So much so that she co-wrote a song with Simmone Jones in support of the band and shot a video campaigning for their freedom in Berlin. The video had no director, but plenty of contributors. There were 70 video submitters and 400 activists who volunteered to help.

Peaches told Rolling Stone that the purpose of the video is "to continue the Pussy Riot concept for freedom and show how it will never die."

Peaches said she first heard about the trial against the three women in March. "I was obsessed with them already and the punk actions they made around Moscow. I was hoping to get in touch with them, but then they got arrested."

The Red Hot Chili Peppers has also gotten involved with the trial.

Michael “Flea” Balzary, the band’s bassist, wrote to Pussy Riot: "Nadya, Katya and Masha, we love you and we support you. We are here to help you. I think about you all the time. I applaud your courage, I pray for your release, I will try to inform as many people as possible about what is going [on] with you.”

Watch a number from their Moscow concert below:

Sting has joined Amnesty International in a statement condemning Russia’s treatment of the punk-rockers:

"It's appalling that the musicians from Pussy Riot could face prison sentences of up to seven years in jail. Dissent is a legitimate and essential right in any democracy and modern politicians must accept this fact with tolerance. A sense of proportion — and a sense of humour — is a sign of strength, not a sign of weakness. Surely the Russian authorities will completely drop these spurious charges and allow the women, these artists, to get back to their lives and to their children."

Amnesty International considers Pussy Riot to be “prisoners of conscience,” and launched a text campaign to show their support.

Here’s a look at Sting performing in Moscow this summer:

Franz Ferdinand is already a uniquely political band. After all, they're named after the leader whose assassination sparked World War I. But the group also has an interest in current politics, and has come out in support of Pussy Riot.

The band dedicated a performance of “This Fire” to Pussy Riot. Alex Kapranos said the song "is dedicated to all of those musicians that end up in jail for just saying what they think."

“Thanks again to everyone in Moscow for your kindness, welcome and support. It's better each time. I have a favour to ask you all...”

“Please show your support for the jailed members of the band Pussy Riot, even if you are not a fan of their music...”

“I'm sure you are all fans of their right to express their opinion. Any world leader who claims to be a fan of the Beatles and John Lennon...”

..then attempts to imprison contemporary musicians who express their political views, is the worst kind of hypocrite: a dangerous one.”

Peter Gabriel, the former member of the 1970s British rock band Genesis, expressed his support of Pussy Riot in a letter: “Nadya, Katya, Masha. You have the right to make your own prayers — from the heart. I hope you will be released very, very soon. We are all watching."

Gabriel is no stranger to political protest himself. He also wrote BIKO, an anti-apartheid protest song. Check it out below:

The promoters of CBGB (a.k.a. “Home of the underground rock”), a free music festival, have designed merchandise in support of Pussy Riot. Soon you’ll be able to buy the shirts online. Even Amnesty International is selling them, with proceeds going to Pussy Riot members and their families. The t-shirts read “Free Pussy Riot.”

You can check out their merchandise and learn more about the festival here.

Letter to The Times

In a letter that appeared in the British newspaper The Times, a group of musicians asked Putin to release Pussy Riot. “We believe firmly that it is the role of the artist to make legitimate political protest and fight for freedom of speech.” Signatories of the letter include Corinne Bailey Rae, Jarvis Cocker, Pete Townshend, and Alex Kapronos of Franz Ferdinand.

“I’m very concerned with the young girls in Moscow, who are on trial for just being free, for expressing themselves,” The Godmother of Punk said in an interview.

She was sporting a T-shirt printed with the words FREE PUSSY RIOT.

“It’s a small way to show my solidarity,” she says of the t-shirt. Smith was a punk rocker herself starting back in the 1970s.

Check out Patti Smith's "People Have the Power" below:

The American punk rock band Anti Flag performed a benefit show for Pussy Riot in Berlin on July 31. The money from ticket sales went towards Pussy Riot’s legal defense. “As a human being I feel obligated to speak out about injustices,” said the band’s drummer, Pat Thetic.

Here’s the interview in full:

The Canadian punk rock band put on a concert with Radio Chacha in support of Pussy Riot on July 25 in Moscow. “Punk — it’s not a crime, it’s just another point of view,” the leader of Radio Chacha said at the performance. A group of fans rushed the stage during “We’re All to Blame” and unfurled a banner with a message for the world: “Peace. Love. Sum 41.”

Check out the following number from their Moscow concert:

Actress and “Clueless” star Alicia Silverstone has spoken out in support of Pussy Riot, too. She doesn’t take a side on the controversy, but instead politely requests that dietary restrictions are respected and appropriate food be provided for the vegan member of of the band, Maria Alekhina.

“As a vegan myself, I was deeply concerned to learn that one of the women, Maria Alekhina, who is a vegan, reportedly collapsed from hunger during a court session,” Silverstone wrote, “Regardless of the trial and its outcome, I’m sure you can agree that everyone has the right to show compassion and refrain from harming animals by being vegan.” You can read the full letter here.

Of course, Silverstone has a history of politically active roles. Check out her debate scene in "Clueless":

Danny DeVito wrote to Putin, too, but used Twitter to do it: “Mr Putin... Pussy Riot...set 'em free...” Short and sweet, DeVito got the message across in well under the 140 characters.