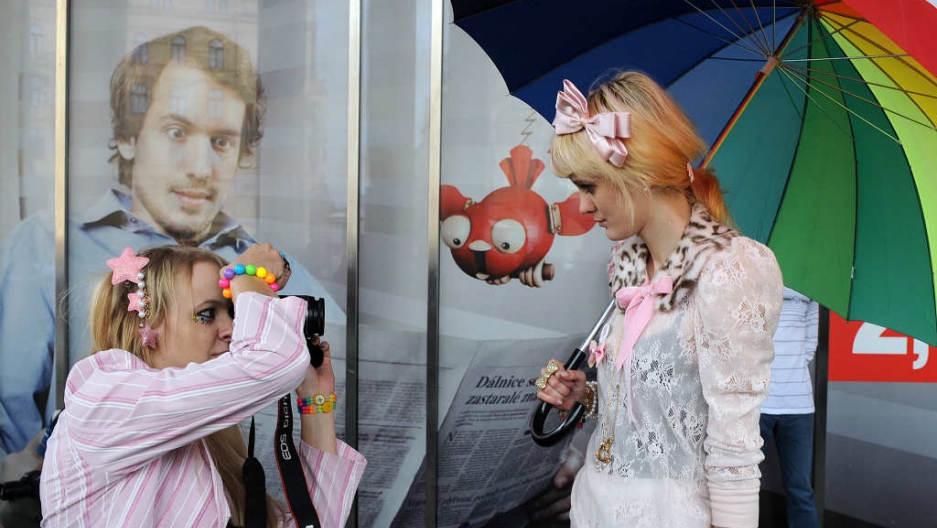 A girl takes a picture of her friend during the first gay pride festival in Prague on August 13, 2011.
Credit: Michal Cizak
Share

PRAGUE, Czech Republic — On a cobbled street in Prague’s swanky Vinohrady district, two young men walk hand in hand. At a street corner, by a row of brightly-coloured recycling bins, they stop and kiss. Then they bid farewell, with the ubiquitous ‘ciao’ that the Czechs have borrowed from the Italian, and go their separate ways.

Gay men and women from the Czech Republic and beyond have converged here this week, for the week-long Prague Pride festival, culminating in the obligatory parade celebrating gay culture.

Vinohrady, perhaps rather hopefully, is sometimes referred to as a gay Mecca, thanks to half a dozen or so gay clubs and bars. Some are hidden away in the basements of fin de siècle apartment buildings. Others are located on busy boulevards, their tanned, well-groomed and exclusively male customers sitting under cafe umbrellas watching the world go by.

But even in this tolerant and largely atheist society, gay pride faces determined opponents — including a conservative president and a former prime minister who famously declared that “fags” were not his “cup of tea.”

“When you’re in Prague, you have the feeling that the LGBT (Lesbian Gay Bisexual and Transgender) community is accepted,” Czeslaw Walek, chairman of the Prague Pride association, told GlobalPost.

“But you have to go outside of Prague to see what life is really like for gays and lesbians who live in a small city and who are afraid to hold their partner’s hand, who are afraid of kissing in public, and who have to be in hiding,” he added.

“A number of people have a huge problem with coming out because of that.”

This week Prague will belong to them. The Prague Pride festival offers ‘a truly original cocktail of activities’, from a ‘queer hike to freedom’ to seminars on living with HIV.

On Saturday, Prague will once again be awash with rainbow flags, as dancers on flatbed trucks lead a procession of thousands through the ancient streets of this Central European city. Eight thousand people attended the first Prague Pride parade last year; this year, the numbers could be higher as the thermometer soars.

The first Pride was generally deemed a success. The parade in particular dwarfed the protests against it; in one comical scene a group of Czech neo-Nazis seethed in fury as gay men and women in outlandish carnival costumes blew kisses as they marched by. Riot police – with indulgent smiles for the marchers and scowls for the skinheads – kept the two sides apart.

The only violent incident witnessed by this reporter was a brief scuffle when a heavy-set skinhead stomped on a rainbow umbrella belonging to a woman in a pink party dress. He was briefly detained by police.

But even in gay-friendly Prague, the festival is testing the limits of Czech tolerance, particularly as it’s held under the auspices of the (conservative) Mayor of Prague, Bohuslav Svoboda.

“Legitimising the homosexual way of life is an effort to cover up the fact that same-sex cohabitation cannot produce a family,” railed Michal Semin, head of the conservative DOST (Trust-Objectivity-Freedom-Tradition) initiative in an editorial in the liberal Lidové noviny newspaper on Monday.

“Public officials who support the homosexual lifestyle and place it on the same level as marriage are acting against the fundamental interests of the society they are supposed to serve,” Semin continued.

“They should be ashamed of themselves.”

DOST – which is close to the country’s conservative president Václav Klaus - has delivered protest notes to the embassies of the United States, the Netherlands and Israel to complain over their support for Prague Pride.

“I’m not surprised at the first two – the Obama administration is known for its leftist cultural imperialism and the Netherlands is a country where progress has gone so far it’s now possible to marry yourself,” Semin wrote.

“But the support of the Israeli ambassador is surprising. Surely as a child he must have read the story in the Torah, the one where a city called Sodom held its own Gay Pride festival. And all that was left was salt on the banks of the Dead Sea.”

Czeslaw Walek has little more than a wry smile for detractors such as Michal Semin, and is unfazed at plans by DOST to hold a counter-demonstration a few hours before the first marchers begin to gather. He is buoyed perhaps by ever more overt support amongst mainstream politicians.

Last year, the festival was held under the auspices of the mayor, but largely ignored by official representatives. This year, Mayor Svoboda held a VIP reception to launch the event.

President Klaus – known for his outspoken views on various politically correct ‘isms’ – has meanwhile remained largely silent, telling the media he’d said all he wanted to say last year. A year ago he sent journalists scuttling for their dictionaries after criticising what he described as ‘homosexualism’ – the flagrant, aggressive propaganda of gayness. His key adviser Petr Hájek, meanwhile, insisted gays were ‘deviants’.

But while some believe the reactionary views of the president and his outspoken advisers are an anomaly in an otherwise tolerant, mature and open society, not everyone is convinced.

“Czechs may sound like a very tolerant society but the reverse is true,” Jana Ciglerová, a journalist who covers gender issues for the leading daily Mladá Fronta Dnes, told GlobalPost.

“The general attitude was best summed up by the former prime minister Mirek Topolánek, who said: ‘I got no problem with fags, it's just that they're not my cup of tea,’” Ciglerová said.

“Too often you'd hear gays being talked about in derogatory way or the word gay and its less proper variations being used as swear word or bad name. Gays are being laughed at and talked about behind their backs.”

More from GlobalPost: Nigeria: Where being openly gay comes at a steep price