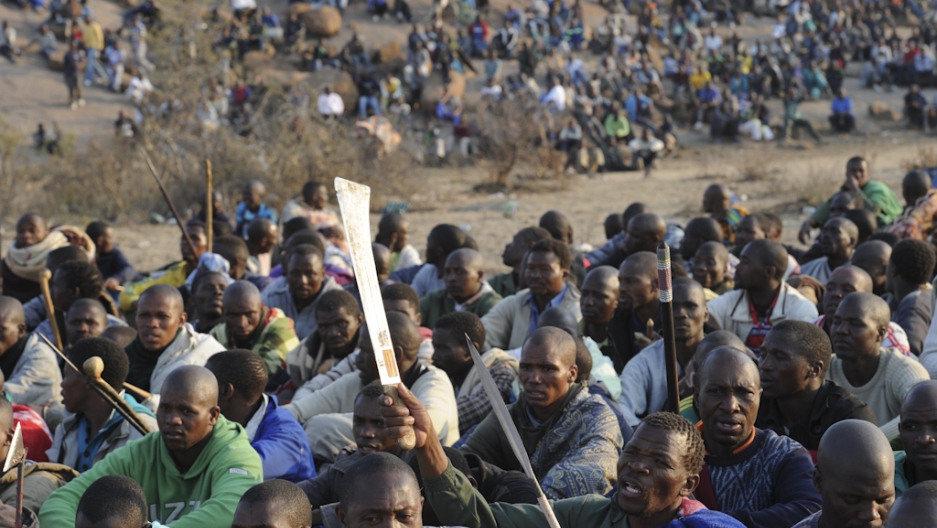 Striking mineworkers armed with machetes are monitered by a large number of police as they stage a sit-in on a hill near the Marikana mine in Rustenburg, 62 miles northwest of Johannesburg on August 15, 2012, where they are demading a wage increase. Ten people were killed in clashes at the platinum mine, which is run by leading producer Lonmin, between rival unions, the leading and decades-old National Union of Mineworkers (NUM) and the smaller Association of Mineworkers and Construction Union (AMCU).
Credit: -
Share

JOHANNESBURG, South Africa — Police have opened fire on workers at the troubled Marikana platinum mine in South Africa.

The Marikana mine, owned by London-based Lonmin, has been the site of violent clashes amid a turf war between rival unions.

A Reuters cameraman said he saw at least seven bloodied bodies lying on the ground, with the shooting took place Thursday as police laid out barricades of barbed wire. The South African Press Association said its reporter counted 18 bodies.

Police have confirmed there were deaths, but the exact number of casualties remains unclear.

Update from GlobalPost: South Africa: At least 30 dead in Lonmin Marikana mine shooting

An estimated 3,000 striking workers had gathered on a hill near the mine, located in the city of Rustenburg about 60 miles northwest of Johannesburg.

SAPA said police had fired tear gas and used a water cannon to disperse the workers, who carried machetes and chanted war songs. The strikers retaliated by firing live ammunition at police, the news agency said.

Earlier this week, 10 people including two policemen died in clashes at the mine.

Gideon du Plessis, general secretary of trade union Solidarity, said South Africa's international reputation as an investment destination is suffering because of the continue violence, especially at a time when the platinum industry is under pressure.

"This illegal action is not a labor dispute, but merely criminal behavior aimed at destabilizing a workplace," du Plessis said in a statement.

Johannesburg- and London-listed Lonmin's shares dropped by more than 6 percent on Thursday, and production at the company's two South African mines has stopped as a result of the violence.

Lonmin said in a statement that workers must return to their jobs on Friday or else face being fired.

South Africa's platinum-mining region accounts for three-quarters of the world's known supplies of the precious metal.

While the country remains the world’s biggest platinum producer, several platinum mines have stopped construction or suspended operations this year because of low prices, rising operating costs and labor strife.