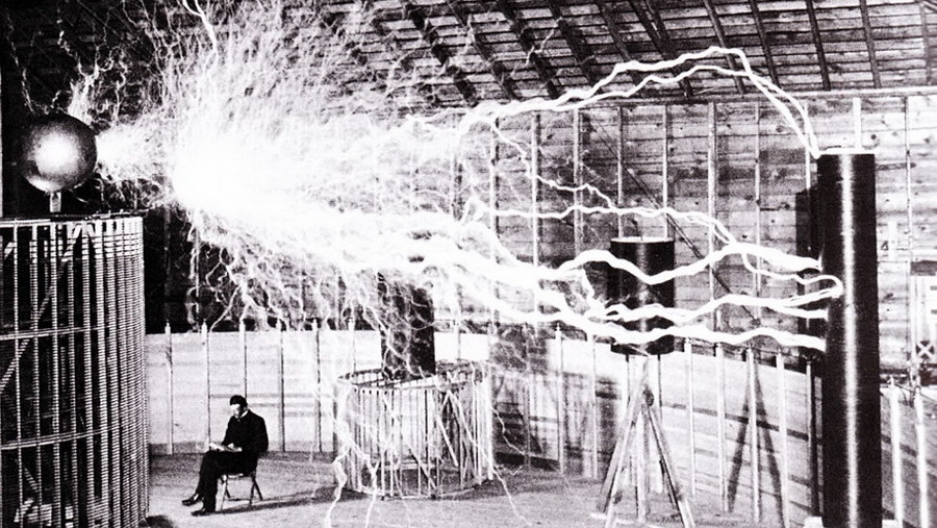 Publicity photo of Nikola Tesla sitting in his laboratory in Colorado Springs in December 1899, the same year the laboratory was built. The photo was taken by Dickenson V. Alley, photographer at the Century Magazines. Tesla sent a copy of this photograph to Sir William Crookes in England in 1901.
Credit: Dickenson V. Alley
Share

Are you a fan of charismatic and long-deceased scientist Nikola Tesla? You're not alone: the eccentric genius who pioneered incredible electrical technologies has become something of a cultural touchstone in recent years. I mean, David Bowie even played him in "The Prestige."

So it's unsurprising that the webcomics artist behind "The Oatmeal," Matthew Inman, has decided to launch a campaign to buy Tesla's long-abandoned lab in New York State, Wardenclyffe. And you can help contribute to the cause.

At Wardenclyffe, Tesla attempted to build a tower which would produce large-scale electrical transmission without wires that could theoretically provide electricity to the whole planet, in an era in which the concept of wireless technology was still both very new and very weird.

After acquiring a backer, Tesla began to build the tower - but he eventually lost his funding and had to quit the project in 1917.

The tower was demolished, but the laboratory and the grounds is still intact - and they're in danger of being demolished or turned into a mall. For the considerable (and vocal)  geek population of the Internet, this cannot stand.

Which is where Inman's Indiegogo campaign comes in. If the campaign raises $850k, a non-profit that's trying to turn the property into a museum will match the funds. All funds will go to the nonprofit, according to Inman's campaign page.

The Oatmeal does a great job of explaining why Tesla was the greatest geek who ever lived here, but I can probably take a stab at it. According to the Tesla Memorial Society of New York, the great man was born in 1856 and eventually immigrated to the USA, where he worked for Thomas Edison. (You've probably heard of him. They didn't get along).

In his career, Tesla pioneered the alternating current, the foundation of modern electrical technology. He also discovered the rotating magnetic field, which helped to create the induction motors found in all manner of average household appliances today. You can thank Tesla for your refrigerator.

Ultimately, Tesla alone held 700 patents and came up with scores of ideas far before his time. He still died alone, and in debt.

You can contribute to this quite worthy cause at "Project Let's Build a Goddamn Tesla Museum" over at Indiegogo.

Here's a video about how rad Tesla was: