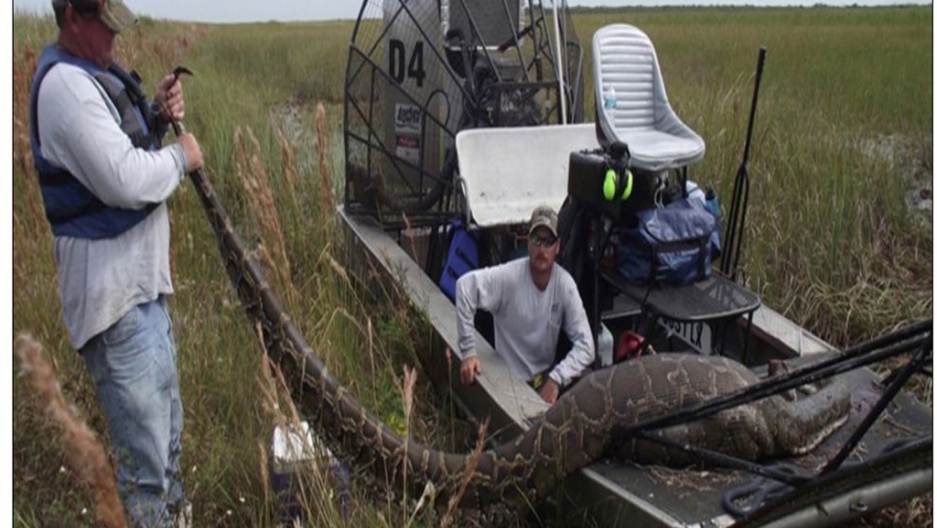 This Burmese python was captured and killed in the Everglades after it gulped down a 76-pound deer.
Credit: Daily Mail
Share

A 17-foot long, 165 pound Burmese Python was captured in the Everglades, reported CNN, and brought to the University of Florida for further study.

"This thing is monstrous -- it's about a foot wide," Kenneth Krysko, manager of the museum's herpetology collection, said in a University of Florida press release. "It means there's nothing stopping them and the native wildlife are in trouble."

The snake was dissected and will be studied by scientists, and then will be displayed at the University of Florida's museum. Here's some video. The snake is "angry," which is probably understandable.

Burmese Pythons are an invasive species in Florida, originally imported from Southeast Asia by opportunistic animal brokers. Despite their massive size, Burmese pythons are generally considered pretty good pets due to their docile disposition, making them an attractive proposition to potential wild-animal owners.

But keeping an enormous, hungry snake in your house is a proposition that gets old fast for many—and released or escaped animals were first recorded in the Florida Everglades way back in 1979. They have made themselves very much at home since.

According to the University of Florida, the snakes are extremely opportunistic hunters, and have been known to feed on deer, bobcats, native birds, and even alligators, among other prey.

In response to the snake problem, Florida is now issuing some hunting licenses for Burmese python, in case you wanted a really manly way to spend your next vacation. Hunters may sell the hide or meat, but the pythons are not recommended for human consumption, due to high levels of mercury in their flesh. Darn.

In the wild, says National Geographic, Burmese pythons can reach 20 feet and weigh upwards of 200 pounds. They're also superb swimmers that can hold their breath for more than 30 minutes.

This simply wouldn't be a blog post on Florida Burmese pythons without a video of an alligator and a gigantic snake fighting. So here you go.

Watch Alligator Versus Python on PBS. See more from Nature.