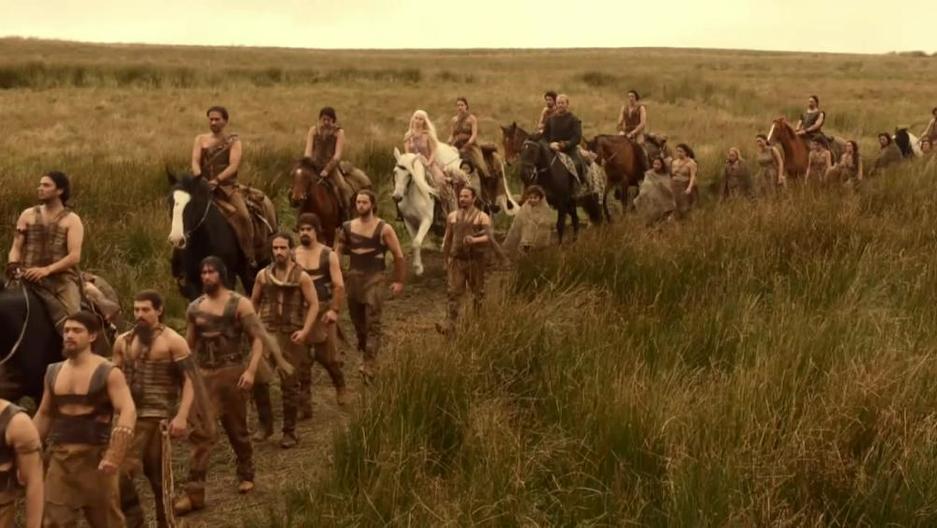 Dothraki is a language spoken by fierce, fictional warriors in a far-off land.

The language was invented closer to home by David J. Peterson, who is neither fierce nor fictional. He lives in a studio apartment in Southern California.

Peterson is a University of California-Berkeley trained linguist, he created Dothraki for HBO’s fantasy drama Game of Thrones. He works in the rarefied field of constructed languages where he and people like him don’t just study languages.

They make up new ones from scratch.

Peterson has invented a dozen languages, with names like Kamakawi and Njaama. He was creating his languages in relative obscurity when he heard that Hollywood needed someone with this talents. HBO was looking for a someone to develop the language of Dothraki for Game of Thrones, adapted from the popular book series.

Peterson got the job. Starting with the books, which had a handful of Dothraki phrases, he went to work on a 300-page grammar guide and dictionary for the language.

The Dothraki portrayed in the books are “a natural, horse-riding, semi-barbarous people,” Peterson said. “They are nomadic ... they hunt and they raid.”

Peterson says the TV series producers were looking for a language that embodied that aesthetic — something that would sound gruff but authentic.

People have been making up languages for centuries, often for philosophical or religious reasons. Probably the best known is Esperanto. It was invented in the 19th century with the idea that if everyone on the planet spoke the same language, they would all get along.

Later, Hollywood got into the created language act. Perhaps the most famous example is the invention of Klingon for the Star Trek movies. Klingon has since taken on a life of its own, with a small but dedicated group of speakers who have added hundreds of words and phrases to its vocabulary.

Na’vi is a more sophisticated language, with a wealth of grammatical rules. It was created for the movie Avatar by Paul Frommer of the University of Southern California. But because Dothraki was invented for a television series that could run for many seasons, it may end up having the widest vocabulary of any Hollywood language so far.

"If you want to greet some respectfully, you say Mathchumararoon," Peterson said.

And then there are insults. Everyone, including TV producers, wants to know how say them. In Dothraki, the word ifak means a "walker."

“The Dothraki are a horse riding people,” Peterson said. “They respect people who ride horses. So, if someone is a walker they are not worthy of attention.”

Peterson concedes that there is a “rather vocal” minority of language inventors who believe there should be no created languages in movies and TV. They see language creation as a “private activity, something special to them. And the more people who know about it they less special it is.”

But Peterson says most language inventors support his work for Hollywood.

And he’s doing more. His next project is to create two languages for an upcoming TV series produced for Syfy (formerly the Sci-Fi Channel).