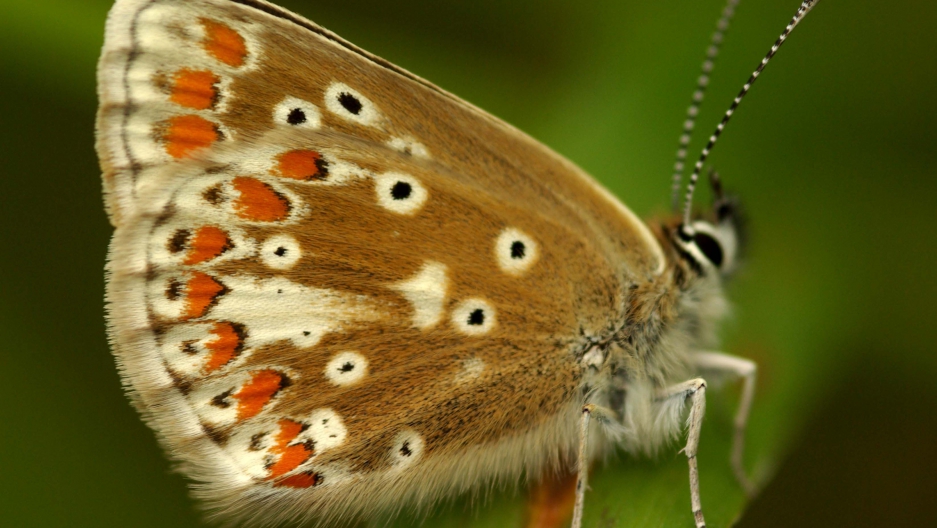 Mutant butterflies are flitting around the site of the Fukushima Daiichi nuclear disaster, and the public is — understandably — looking for answers.

GlobalPost reported yesterday that some butterflies near the site of the Japanese meltdown, according to a recent study, are exhibiting some bizarre characteristics, including smaller wings, irregularly developed eyes, and malformed antennae.

The study, published in Nature, also found that pale grass blue butterflies appear to be passing abnormalities to their offspring.

But how worried should we be about this new development, and the possible effects of low-dose nuclear radiation on humans? GlobalPost contacted City University of New York biology professor Dr. Joseph Rachlin to find out more.

What is a mutation, anyway?

"A mutation by definition is a change in genetic structure," said Rachlin. The butterflies, according to the study authors, are exhibiting germ-line mutations, which are hereditary. That's different from a somatic mutation, which only affects the body and can't be passed on to offspring.

"A genetic mutation can be positive, it can be negative, or it can be neutral, in the sense that it's affecting — or not affecting — deleteriously the survivalship of the butterfly population," Rachlin said, adding that there are actually more neutral mutations than negative in nature.

"The concerns you're looking at are manifested at the population level," said Rachlin of the Fukushima butterflies. "We don't really care about what happens to an individual organism — unless it's human."

Why should we care what happens to butterflies?

"There're stages in the life history of an organism in which they are more susceptible than other times," he said, citing the multiple physiological changes that butterflies undergo from the stages of caterpillar to adult. These changes may play a part in the insect's sensitivity to nuclear fallout.

"Young organisms, juveniles, tend to be more susceptible than organisms that are older and more adult," added Rachlin.

This is also why human children are considered much more vulnerable to nuclear radiation than adults — and why children are usually evacuated first and given protective iodine tablets when nuclear crises hit.

Are the butterflies radioactive?

No. Relax. The Fukushima butterflies aren't glowing-green with radioactivity, and it's highly unlikely that they'd elicit a high reading on a Geiger Counter — a device commonly used to measure radioactivity — either.

"If the butterfly is showing the mutation, that occurred already. The butterfly is not necessarily radioactive," said Rachlin. "The radioactivity is not being transferred from generation to generation. The genetic effect, yes, but not the radiation."

Will mutant butterflies become more common than healthy butterflies, since the mutation is in the genes?

It's unlikely. Although some mutations can help an organism out, those cited in the Nature study probably aren't among them. Smaller wings and malformed antennae mean that these butterflies probably aren't getting around very well, making them attractive food for birds and other predators.

What does this mean for other animals?

"If you are seeing this kind of an event occurring in butterflies, this kind of signals you might want to take a look at other organisms in the local environment to see if they too are manifesting a particular problem," said Rachlin.

"We worry about food being contaminated because the maintenance of a radioactive isotope from a fallout situation gets into an organism, and creates a problem."

But we don't eat butterflies, and we don't tend to eat the organisms that eat them, either. What's more, the birds and other predators that commonly prey on butterflies will probably be fine, too.

"You're not getting something that's accumulated and spread through the foodchain like a toxin," said Rachlin. "To the best of my knowledge, that hasn't been reported."

How bad is Fukushima's radioactivity, anyway? How does it compare to Chernobyl?

A Nature article published in May found there were "minimal health risks" from radiation after the Japanese nuclear disaster — and that very few people are likely to develop cancer from their exposure.

Rachlin said the effects of the Fukushima fallout thus far seem relatively mild, especially when compared to the infamous Chernobyl disaster, where much more radiation was released into the environment, causing deaths and health problems in both people and wildlife.

"It wasn't like Chernobyl, where you had the meltdown and all that terrible disaster after," he said.

Curiously enough, wildlife appears to be thriving in the Chernobyl area, according to ScienceDaily — indicating that nuclear radiation may not be as damaging to an ecosystem as was previously believed.

If you're interested in radioactivity in nature, the incredible art of Cornelia Hesse-Honegger is well worth a look. The scientific illustrator specializes in painting exquisite images of deformed insects that she collects near radioactive sites. Perhaps she'll pay a visit to Fukushima soon.