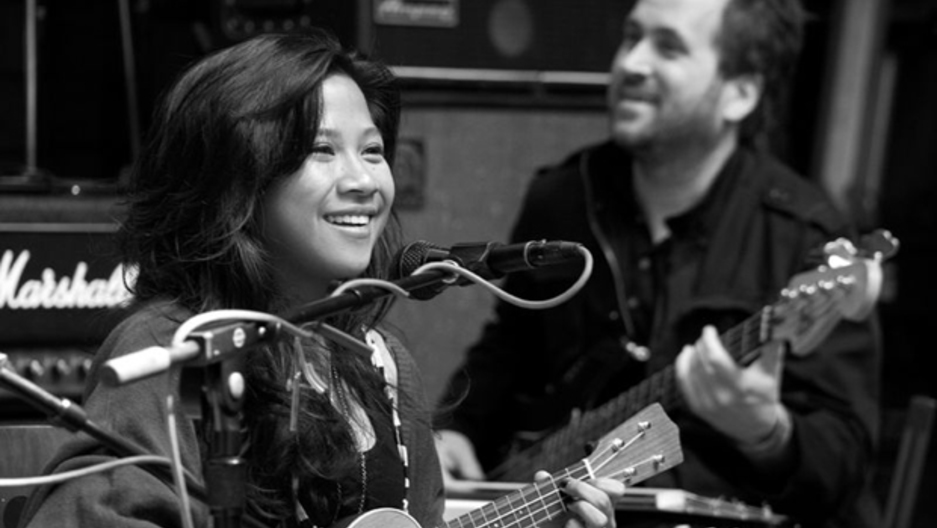 Share
Twenty six-year-old Malaysian native Zee Avi has had a meteoric rise. Avi says she struggled to find her place growing up, and turned to writing poetry, adapting her rhymes to songs. She created music videos and posted them on YouTube. Her simple, Malaysian inspired songs clicked with her generation. Her shy, beautiful voice immediately appealed to millions. Now she's living in New York City. But she recently performed at the Rainforest World Music Festival in the Malaysian state of Sarawak, Borneo. And that's where Maria Bakkalapulo met up with her to talk about her unique journey to the big time. Life often changes quickly, sometimes dramatically. Zee Avi's life was altered forever in 2007 after promising a friend that she would share some of her music with him on YouTube. "I shot just like half of my face so no one would know what I look like," she said. "So it has my chin and my guitar. The first song was Poppy. And the next day I got 30 views. I thought, wow, where did these people come from. And then I posted another video. And I kept posting more videos and more videos and more people started leaving comments, and I was like 'far out, this is crazy.'" She was eventually featured on YouTube's homepage and the views skyrocketed, reaching the million mark. She became a "YouTube Sensation" and soon found herself obsessed. "I used to write five songs a day and all the songs on YouTube were fresh out of the oven," Avi said. "They were written maybe 10 minutes to a half an hour before I posted them. You know, back then, YouTube was just starting out and that was my home for a while." Her inbox started to fill with offers from record labels and management agencies. "And then about 4-5 days after I got featured I got this inbox: 'Hi my name is so-and-so from Monitor Management, we manage The White Stripes, MIA, The Shins, and all these great bands that I am a fan of and I said, alright. We exchanged information and they called me and said, 'your English is so good.' I said, 'yeah, thanks, it's Sesame Street,'" she said. Avi moved to America and away from the shelter of her family's home to record in a professional studio. Her music is simple and sweet, about young love and nature. Being in Borneo brings back memories of the simplicity that inspires her. "Back then, I didn't grow up in a household where I had video games, or anything like that," she said. "We played outside, my cousins and I. And I lived five minutes away from the South China Sea and I went there every day. My dad made it a point to take me to the beach every evening. That was my backyard too." She also reflects about her own struggle with feeling awkward about leaving Borneo for the big city of Kuala Lumpur, where her life would begin to change quickly. "A lot of the elements that I write from are based on nature. But it's really not intentionally at all," Avi said. "I guess that's how the songs chose to write themselves. But the fact of the matter is that is where my inspiration is most fertile is when I'm in this sort of climate and when there is stillness and calmness and there is nothing but the sounds of ants crawling, or birds, or crickets or cicadas." Avi's father moved the family to Kuala Lumpur when she was 12. She says living in a "concrete jungle" was quite a shock. Concrete plays a big role in one of her current songs. A song she plays on an instrument called a sape-lele, a cross between a Sape — Borneo's indigenous lute — and the ukulele. "'Concrete Wall' is about couples qualms. Trouble in paradise moments. And that song is basically about letting it all out, letting it all reel on the table and being hopeful at the same moment because that song it has no conclusion," Avi explained. The Malaysian government is promoting Avi as a role model for young people in the country, even as an ambassador of the state of Sarawak. Google Zee Avi's name, and your search will come up with an endless list of other young Malaysian girls, and even dance troupes, covering and dancing to her songs. "I know, that is crazy. And it's great because, you know, covers are your own interpretation of somebody's art. So to know you are not alone in what you went through is, for me, just very rewarding," she said. With two albums out, and a third in the works, Avi gives the YouTube generation of musicians something to aspire to.