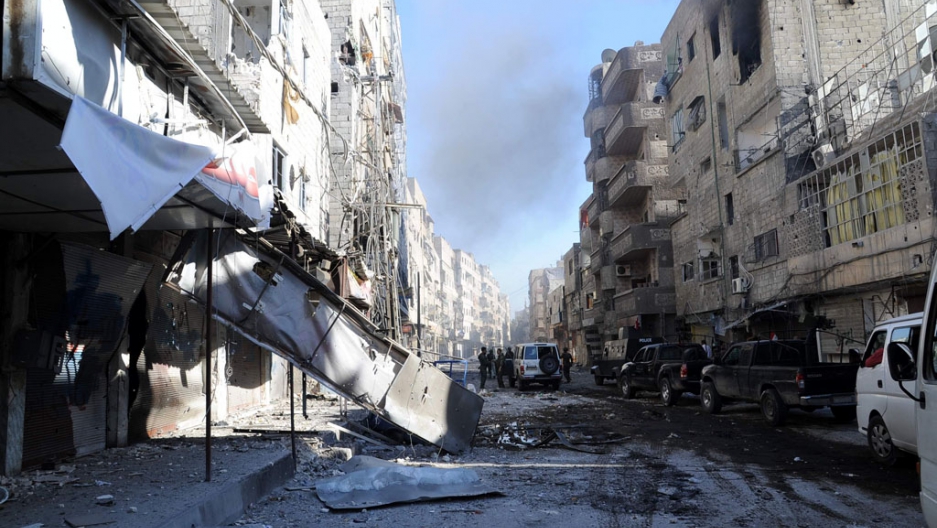 Smoke billows on August 4, 2012 in the Damascus suburb of Tadamun, the scene of heavy fighting which was retaken by government troops in the afternoon. The Syrian army now has the whole of the capital under its control, a brigadier-general told journalists visiting the southern neighbourhood which the general said was the last rebel bastion in the city to revert to army hands.
Credit: STR
Share

The blast damaged the Dama Rose hotel and a nearby building, said NYT. It was not immediately clear, however, if the hotel was the target of the attack, with Al Jazeera citing the country's main rebel group as claiming the attack but saying they were trying to hit the central security command.

The explosion, which was also near the ministry of defense and a club for military officers, reported The Washington Post, can be seen here:

A Free Syrian Army (FSA) brigade spokesperson, Abu al-Noor, told Al Jazeera today that the "operation was targeting the central security command in response to murders perpetrated by the security forces nationwide," later vowing, "[w]e will continue to carry out similar operations in the capital until we reach him [Assad] in the presidential palace."

Syria's President Bashar al-Assad has been locked in a battle for control triggered by an over year-long armed insurrection against his rule. The violence has left some 20,000 people dead, activists say, bloodshed that has prompted international outrage. Today's bombing comes amid a two-day emergency meeting of the Organization of Islamic Cooperation, which is expected to focus on the Syria crisis (and possibly suspend its membership).

It was not immediately clear whether visiting UN humanitarian chief Valerie Amos was near the hotel -- where the UN's Syria mission head held a press conference on Monday -- at the time of the blast, said The Washington Post.

The UN has 100 observers currently stationed in the country, according to the Washington Post, and is set to meet Thursday about the future of the mission, whose mandate expires August 19, said SKY.

Also today, the US accused Iran of helping the Syrian regime build and train a milita.