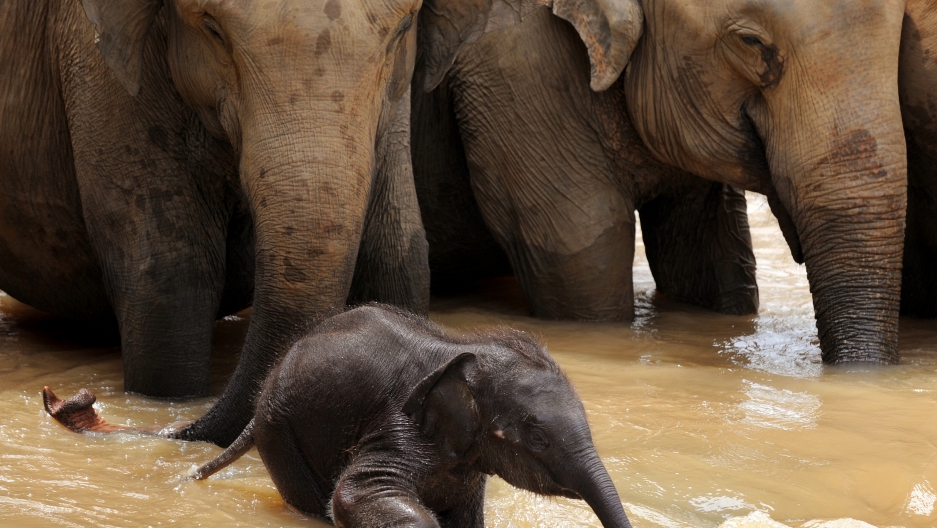 A baby elephant playing in a river in their daily outing from the Pinnawela Elephant Orphanage in Sri Lanka.
Credit: WILLIAM WEST
Share

While elephants have been impregnated with fresh or refrigerated sperm before, this could be the first elephant baby born from frozen sperm if all goes well, Reuters reported. Frozen sperm is advantageous because it can travel further and allows more flexibility in timing.

"Since the survival of elephants in their natural habitat is under threat, zoos around the world are striving to preserve them," Schoenbrunn Zoo Director Dagmar Schratter told Reuters. Zoos have five female elephants to every one male, something researchers are trying to change. Both African and Asian elephant species are endangered due to poaching.

This isn't the first elephant pregnancy from frozen sperm, the AFP reported, There's actually been two similar pregnancies, but in both cases the males were also kept in captivity, and the fetuses ended up dying.

"If this calf is born it will be the first time worldwide that this works with frozen sperm," a zoo spokesman told the AFP.

Scientists collect sperm from male elephants using "electro-ejaculation," GlobalPost reported in March. The process works by drugging the male elephant and then forcing out his sperm with a volt charge.