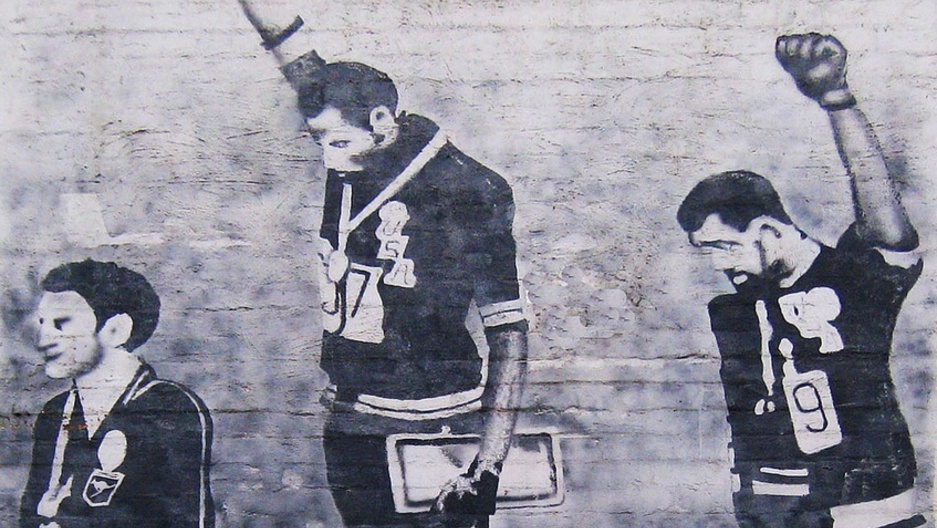 This mural in Sydney, Australia, depicts Tommie Smith (center) and John Carlos (right) making the "black power" salute on the podium during the 1968 Summer Olympics. (Photo by Newtown grafitti via Flickr CC.)

The ancient Greeks came up with the idea for the Olympics nearly 3,000 years ago, but some notable changes have occurred since.

Like uniforms. The Greeks once played their games naked — no foreign-made uniforms for them. This helped them avoid the kind of political hot water the U.S. Olympic Committee found itself in with its made-in-China team outfits.

But don't be misled. The Olympics have always been about politics as much as games. In ancient times, the Olympics provided a time of "truce" between warring Greek city-states. They became a proxy for the political and military contests between places like Sparta and Athens.

That geopolitical one-up-manship still exists, ever since the games were revived in 1896. The most notorious case of politics came during the so-called "Nazi Olympics" of 1936. The Olympic torch relay, first introduced that year in Berlin, was meant to provide a symbolic connection between ancient Greece and Rome and Nazi Germany as the center of civilization.

The Germans also believed that their "Master Race" rhetoric would be matched by the domination of their athletes. However, American sprinter Jesse Owens emerged as the hero of the games, and put that idea to rest with four gold medals.

During World War II, the Olympics were put on hold. But when they returned in 1948 — in a bombed-out, rebuilding London — the Germans and Japanese were not welcomed.

As the Cold War heated up, the Olympics became the athletic equivalent of war, mainly between the Soviets and the U.S. But in one of the most memorable Olympic moments, the water polo pool was a real battlefield. The Hungarians defeated the Soviet team in 1956, shortly after Soviet tanks had crushed the Hungarian Revolution.

In 1980, President Jimmy Carter announced that America, among others, would boycott that year's Moscow Olympics to protest the Soviet invasion of Afghanistan. And four years later, the Soviets made a counterstrike, boycotting the Los Angeles Games, citing "anti-Soviet hysteria" in America.

Few Olympic moments were more political than in the 1968 Mexico City games, when American sprinters Tommie Smith and John Carlos held their gloved hands aloft on the medal podium. Castigated for giving what was widely construed as a "Black Power" salute in that turbulent year for American history, the sprinters later claimed that it was actually a "human rights salute."

But all of these political moments pale, of course, to the events of 40 years ago, when 11 Israeli athletes and a West German police officer were killed by terrorists at the 1972 Munich Olympics. That Olympic massacre remains a political firestorm because the International Olympic Committee this year refused to include a moment of silence in the Opening Ceremony to honor the memory of that day.

The London Olympics may be over, but the politics and warfare are never on hold. Remember how the games were originally a proxy contest between the big political powers of ancient Greece? Take a look at the medal count, and you'll see three of the top geopolitical powers of our day — the U.S., China and Russia — all in an arms race to be number one.