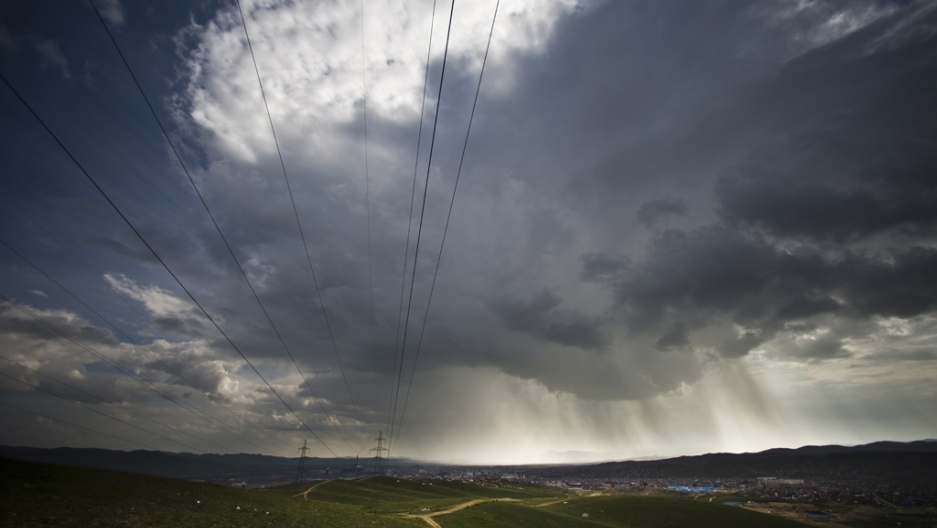 Power lines and menacing storm clouds hover over Ulan Bator's ger district. The district is home to over half of the capital city's population.
Credit: Jonah M. Kessel
Share

SALKHIT, Mongolia — In the vast rolling plains of Salkhit, 45 miles outside the capital of Ulan Bator, a work crew are busy bending large metal cables into an elaborate, squat structure. Once complete, and with a turbine the length of a football field inserted into the top, it will form a key part of the first wind farm to operate in this coal-rich but infrastructure-poor Asian country.

Over the next month, 31 wind turbines will go into operation across this isolated site, supplying an impressive 5 percent of the nation’s current power needs. More importantly, those involved are hoping it will kick-start a clean energy revolution in a country in dire need of non-polluting energy sources.

“We have a vision to transform Mongolia into a clean energy powerhouse of Asia,” says Bayanjargal Byambasaikhan, CEO of Newcom Group, the company behind the project.

Mongolia actually has all of the natural advantages that could make it one of the key sources of clean energy in the world: high plateaus with constant winds; vast, sparsely inhabited plains that could be developed without too much disruption to traditional herder’s lives; and strong sunlight even in the bleak winter months.

“In Mongolia you have large expenses of land, you've got more than 300 days per annum of sunlight and fairly constant wind. So it’s got basically the perfect trifecta for renewable energy in the world,” says Neal Detert, an American project manager at Clean Energy LLC in Mongolia.

The problem is that Mongolia’s past, present, and future are indelibly tied to coal. The black carbon fuel drives the economy (which grew at over 17 percent last year) and is the country’s major export.

It also made Ulan Bator, by some people’s reckoning, the most polluted capital city in the world last winter.

“I had seen the pollution numbers before arriving, but living here is a whole different experience,” says Christa Hasenkopf, a research fellow at the University of Colorado who is studying pollution in Ulan Bator.

Hasenkopf compares the levels of smoke, soot and dust particles present in the capital’s air to those around a firefighter battling a wildfire — “and this is all winter long,” she adds.

Rapid urbanization over the last few decades has resulted in nearly 60 percent of this once-nomadic population living in the capital city alone. A vast shantytown of ex-herders, many still living in traditional yurts and cooking on coal fires, stretches to the north of the city as far as the eye can see.

This migration has pushed existing infrastructure to near breaking point. Roads in and out of Ulan Bator are crammed with traffic and heavily potholed. Classrooms and hospitals are overcrowded, and limited power plants are running at full capacity.

“All of the power plants in Mongolia are old and coal-fired,” says Saurabh Sinha, an economist with the United Nations Development Program in Ulan Bator.

“Increased urbanization and major mining projects are causing a serious strain on the power sector, and the energy infrastructure really needs a lot more investment,” he adds.

Money is pouring into the Mongolian economy like never before, mostly from a handful of large mining concessions run by foreign firms like Ivanhoe and Rio Tinto. Yet so far these projects are, if anything, stretching the existing infrastructure further by using significant quantities of power from the grid.

Over 80 percent of Mongolia's electricity is produced by five coal power plants built mainly in the 1970s and 80s. The newest went into operation in 1991, and with power demands across the country rising dramatically over the last few decades each plant is forced to run at full capacity most of the year, especially in winter when temperatures drop to minus 40 degrees Fahrenheit.

“The power stations were never intended to serve a population this size, so there is only low capacity electricity in the shanty town areas — enough for basic lighting but not heating,” says Hasenkopf. “This makes the situation worse since poor people have to burn low-grade coal to keep warm.”

Those involved in the clean-tech industry are optimistic that wind and solar energy have the potential to radically transform the country, moving it away from coal and at the same time developing an industry as valuable to the country as the fossil fuel is today.

A Japanese research group set up in the wake of the Fukushima nuclear reactor disaster last year has proposed establishing an Asian super-grid, with Japan and other countries importing electricity via high-voltage transmission lines that originate predominantly in newly-created wind and solar farms in Mongolia. So far the project is just at the drawing board stage, but the potential is clearly there.

“Mongolia has a lot of solar and wind energy resources,” says Newcom CEO Byambasaikhan. “Our abundant resources are enough to power all of Asia.”

Newcom, along with its suppliers and partners, which include General Electric and the European Bank for Reconstruction and Development, are already looking beyond the 31-turbine Salkhit pilot project that will start producing electricity later this year.

They are beginning the development of what could eventually be a 1,000-square-mile wind farm in the Gobi Desert. In its first phase alone it will be able to produce six times as much electricity as the Salkhit site, and account for a significant proportion of the country’s energy needs.

Mongolia is developing fast. If developed right, many believe the country has the potential of going from a nation with one of the most polluted cities in the world for almost half of the year to one of the least polluted countries on the planet.

“Mongolia holds some of the greatest potential in the world right now,” says Clean Energy’s Neal Detert. “Twenty wind farms of a similar size to this first one would be able to power all of Ulan Bator’s energy requirements.”