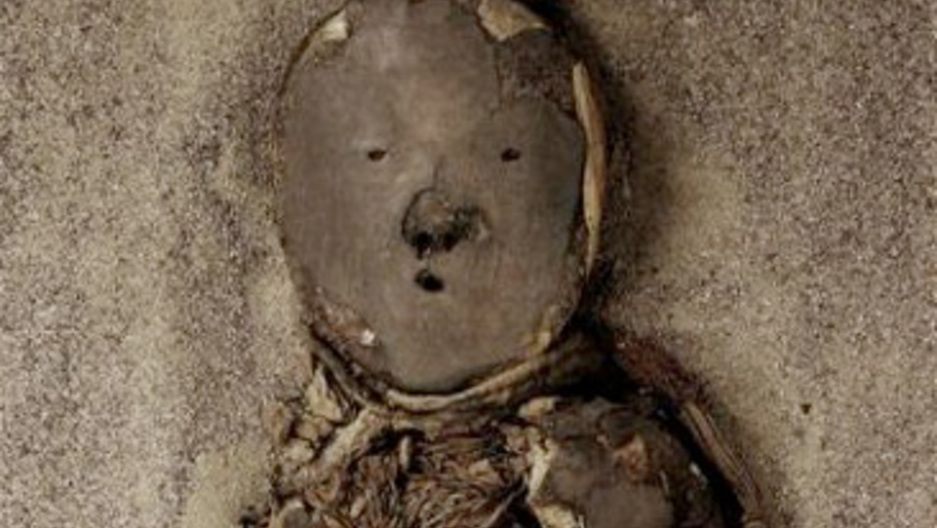 Share
Mummies are generally associated with ancient Egypt. But 2,000 years before the Egyptians, the Chinchorro culture was already mummifying its dead. The Chinchorro people lived on the coast of the Atacama Desert, in modern-day Peru and Chile. Archaeologists have long wondered what spurred these hunter-gatherers to start preserving their dead. A new study points to a changing climate. The oldest Chinchorro mummies date back about 7,000 years. And they show a surprising level of sophistication. Physical anthropologist Bernardo Arriaza is at Tarapaca University in Chole and is an author on the new study. He says the early Chinchorro people followed an elaborate process to mummify the dead. "They removed the organs, they cleaned the cavities," says Arriaza. "Then they start to pack it, particularly with clay, whitish clay." They closed the bodies, sewed the skin back and painted the bodies black from head to toe. Then they placed wigs on the heads, and they left the eyes and mouths open. Unlike other societies that preserved their dead, Arriaza says, the Chinchorro didn't mummify only their elite. "Everybody was being mummified in similar ways," he says. "Older people, younger people, even fetuses and new-borns." But why did this simple society of hunter gatherers and fishermen engage in this time-consuming, sophisticated practice? There have been many theories. But none of them have explained why the practice began when it did. Arriaza and his colleagues suspected there might have been a change in the environment at that time. So for their new study, they looked at clues to the region's ancient climate, collected by other scientists. They found that a couple of centuries before the Chinchorro started mummifying their dead, the climate became less harsh in the region. That meant more fresh water and food for the people. The result was a growing population of people. "A higher population density of living people also means that there were more dead people too," says ecologist Pablo Marquet of Ponitifica Católica de Chile (Chilean Catholic University). In any other place, having more dead people might mean much. But not so, in the Atacama desert, one of the driest places on the planet. "Once you die, you naturally mummify," says Marquet. "Because it's very dry, corpses do not decompose. So you stick around." What's more, the Chinchorro didn't bury their dead very deep. And the bodies could have been easily exposed by the wind. So what Marquet and his colleagues propose is that the Chinchorro lived in a landscape littered with naturally preserved dead bodies.