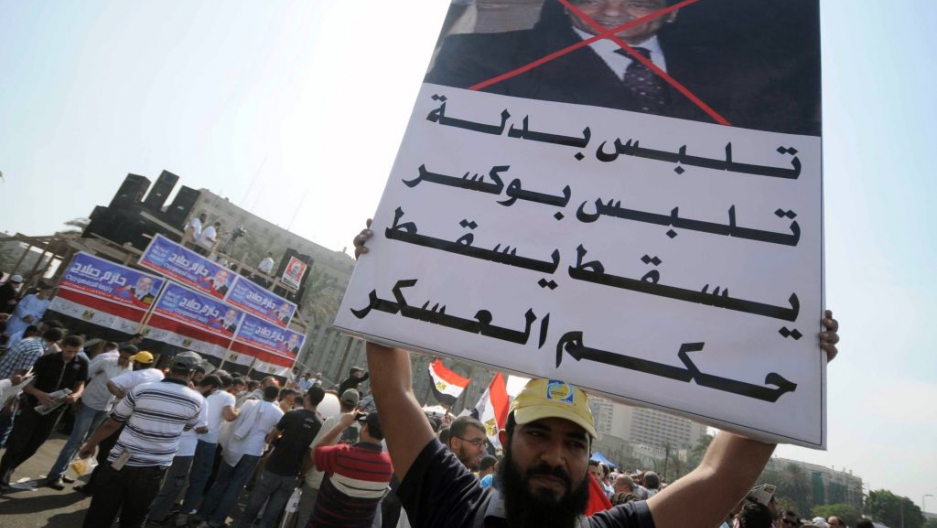 An Egyptian protester holds a banner against Field Marshal Hussein Tantawi in Cairo's Tahrir Square on September 30, 2011 during a mass rally to reclaim the revolution amid anger over the military rulers' handling of the transition.
Credit: Mohammed Hossam
Share

Egypt's President Mohamed Morsi on Sunday announced the retirement of Field Marshal Mohammed Hussein Tantawi, a surprise move that saw the new president taking on a man who controlled the country for much of the past year and has become symbolic of Egypt's reviled authoritarian past. A little history:

Tantawi, born in Upper Egypt, joined the military when he was 21 years old. He proceeded to fight in all of Egypt's major wars in the last fifty years and was honored with Kuwait Liberation medals from Egypt, Kuwait and Saudi Arabia, said BBC. Those were just a few standouts among his total 23 military decorations and awards, accomplishments that caught Mubarak's eye after he became president in 1981. Impressed, he made Tantawi the head of his presidential guard.

Ten years later, Mubarak decided he no longer trusted his minister of defense (more on that here), so he gave loyal Tantawi the job. The general had also served as the country's military attache to Pakistan, according to The Washington Post, foreign policy clout that set him apart from other military careerists.

More from GlobalPost: Egypt's Morsi: Tantawi must go for 'benefit of nation'

Those positions were just two of over a dozen leadership posts held by the 75-year-old general in his celebrated military career, according to GlobalSecurity — not counting, of course, his brief stint as prime minister after Mubarak fell. Yep, Tantawi ran the country after former President Hosni Mubarak was ousted. Many in Egypt accuse him of trying to cling to power since then, but how did he get there in the first place? Wasn't he a Mubarak guy? He was indeed. Here's what happened:

Think back to television screens around the world showing tens of thousands of Egyptians protesting against the government in Cairo's historic Tahrir Square. Egypt last year was a nation in turmoil, with demonstrations seen as passively supported by the military's non-interventionist stance. Then Tantawi took it up a notch, showing up in Tahrir Square a week before Mubarak fell in a first for a senior Egyptian official, according to The New York Times.

It was a decisive appearance — at that critical point, Egyptians were worried about the safety of their families, the future of their livelihoods, and indeed the fate of the nation. They instinctively turned to the military, widely seen as a highly-respected and trusted institution, at a time of crisis. Thus, after Mubarak's historic overthrow, Tantawi's Tahrir moment and long military career combined to make him seem like the perfect guy for the transitional-government job.

Although he had close ties to the ousted Mubarak regime (to the point of being nicknamed "Mubarak's poodle," said Al Jazeera), the general had been at the helm of the nation's army since 1995 and served as the minister of defense and military production for 21 years, according to BBC.

All this helps explain the significance of Morsi's move in forcing Tantawi to retire. But before we let him go — a bit of trivia: