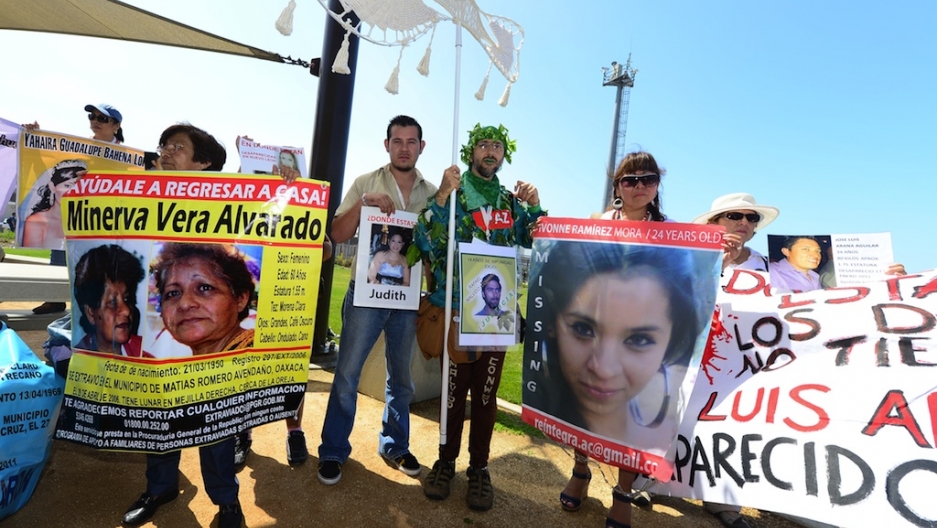 People display images of dead or missing loved ones at Border Field State Park, which separates the cities of San Diego and Tijuana, on August 12, 2012 in San Diego, California, at the launch of the "Caravan for Peace with Justice and Dignity.”
Share

GUADALAJARA, Mexico – A newly elected mayor in the central Mexican state of San Luis Potosi – where 14 bodies were found last week – has been shot dead along with his campaign adviser, in the latest bloody incident in the country.

Matehuala mayor-elect Edgar Morales Perez and his aide Francisco Hernandez Colunga were returning from a party early Sunday when gunmen opened fire on their vehicle, the BBC reported.

The wife of Hernandez Colunga was also in the vehicle, but she survived the attack, the Associated Press reported.

Morales Perez belonged to the Institutional Revolutionary Party, which won the country’s presidential election in July. The National Action Party had ruled Matehuala for years before Morales Perez was elected on July 1.

Last Thursday, police found the bodies of 14 men stuffed in a Mercedes-Benz van along a highway in San Luis Potosi.

They had been kidnapped the day before in the neighboring state of Coahuila.

The latest violence comes as peace activists begin a month-long trip across the United States to draw attention to what they say are the “misguided anti-drug policies” of the United States and Mexico, Fox News Latino reported.

The “Caravan for Peace with Justice and Dignity” is being led by Mexican poet and activist Javier Sicilia, whose son was murdered last year.

Drug-related violence has killed more than 50,000 people since late 2006 when the government stepped up a campaign against the drug cartels.

More from GlobalPost: Mexico murder rate falls in first half of 2012