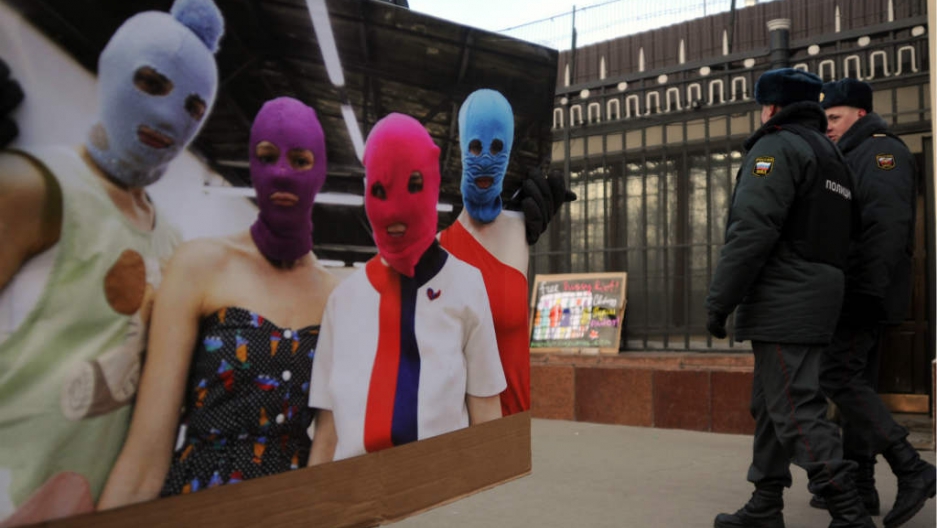 MOSCOW, Russia — As Pussy Riot supporters around the world await the verdict for three of the feminist punk group’s members next week, it’s worth remembering Maria Alyokhina, Yekaterina Samutsevich and Nadezhda Tolokonnikova were unknown last March.

That’s when the young women were arrested on charges of hooliganism for a YouTube video of them dashing into the country’s main Russian Orthodox cathedral dressed in brightly colored dresses and balaclavas to cavort and chant for the Virgin Mary to “rid Russia of Vladimir Putin."

But although the young women — two of them mothers of small children — have become martyrs for the president's opposition and an international cause célèbre during their five months of incarceration, very little is known beyond the videos and pictures of their youthful faces behind the glass of a bullet-proof courtroom pen.

In fact, Pussy Riot isn’t strictly a band, but a group of performance artists. All five of their videos are montages of mimed performances set to expletive-laden punk.

Tolokonnikova has gained the most attenion during the trial for her dark good looks and bob haircut. Her husband Piotr Verzilov, who has emerged as Pussy Riot’s spokesperson, says the group is an all-girl “creative team” of up to 20 activists. He said they were motivated by their opinion that “women can play a very vital part in Russian politics, which are quite sexist."

They include a video of group sex staged in a museum and a 200-foot phallus painted on a Saint Petersburg drawbridge that, when raised, faced the local headquarters of the Federal Security Service.

"It's all about art,” Verzilov said. “It's about art being the correct, brightest and most effective method of broaching political questions and bringing issues to the wider public.”

The group was founded soon after then-Prime Minister Putin announced he would run for president a third time last September. The watershed moment prompted a groundswell of anti-Kremlin sentiment that fuelled a rise of activism in Russia’s large cities.

Voina activist Yana Sarna says the trial against Pussy Riot is “part of their punk action.”

“They’ve managed to reveal the real, ugly essence of the authorities and Russian Orthodox Church officials,” she said.

During the often surreal-seeming proceedings, prosecutors have sought to portray the women’s actions as blasphemy, criticizing feminism as a “sin,” and saying Pussy Riot’s actions caused Russia “moral harm” and incited “religious hatred.” The church leader has described them as the “work of the devil.” Nationalist groups have burned pictures of the band members.

However, 30-year-old Samutsevich, Alyokhina, 24, and Tolokonnikova say they were exercising their right to free speech, saying they did not intend to offend Orthodox believers but to highlight ties between Putin and church officials.

“Of course it was partly a provocation, but it was a quality artistic provocation,” artist Lena Hades says. “They wanted what they sang and thought to actually reach people.”

Hades, who was once charged with extremism for her art, went on a 25-day hunger strike in support of the band, one of the few acts of support by Russia’s artistic community.

More solidarity came last week in the form of a nomination for the cathedral stunt for a prestigious Kandinsky Prize for contemporary art.

During the group’s unrepentant closing statements, which moved the courtroom audience to applaud on Wednesday, Alyokhina said she expected a guilty verdict.

“We are nothing next to the legal machine, so we have lost,” she said. “On the other hand, we have won,” she continued. “The whole world sees that the criminal case against us is fabricated. The system cannot hide the repressive nature of this trial. In the eyes of the international community, Russia once again looks very different from what Vladimir Putin is trying to present."

The case is part of a broader crackdown on the opposition that followed Putin’s re-election in May. As if already lacking in symbolism, the trial was held in the same courtroom in which jailed oil tycoon Mikhail Khodorkovsky was sentenced for a second time last year.

Activists have taken to referring to the Khamovnichesky court by a faux abbreviation, “khamsud,” or “rude court.”

“Khamstyd,” another corruption of the name popularized on Twitter last week, substitutes the word “shame” for “court.”

Although a majority of Russians disapprove of Pussy Riot’s actions, sympathy for the members appears to be growing. A poll by the independent Levada Center earlier this month showed 58 percent of the public now believes their possible seven-year sentence to be excessive or that the women should be freed.

Although the authorities have appeared to be keen to deter critics by making an example of the group, there are signs the government is also softening its position in the face of fierce international criticism.

Putin last week said, “I don’t think we need to judge them too harshly for this,” in what many took to be a signal of the court’s intentions.

However, there’s disagreement as to what a “light” punishment would be. Prosecutors have asked for sentences of three years.