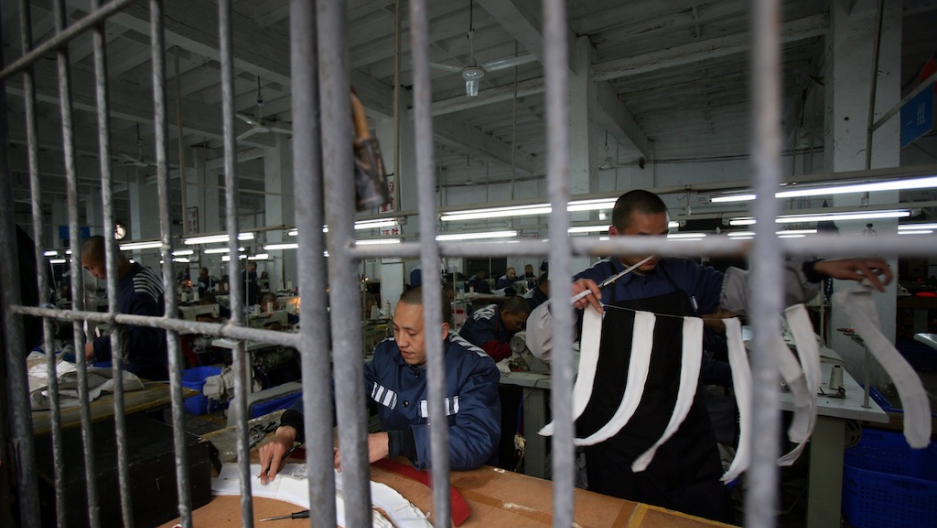 Had her appeal not been upheld, Tang faced over a year of hard labor, possibly in a sewing workshop like this one at a prison in Chongqing municipality, China. The prisons have been routinely criticized for inhumane treatment and terrible conditions.
Credit: China Photos
Share

When her 11-year-old daughter was kidnapped, raped and forced into prostitution in 2006, Tang Hui (a pseudonym being widely used in the media) was irate with the way the case was handled.

After Tang found her daughter in a strip club and took her home, she reported the kidnapping to the authorities, who did nothing. She protested against the government's leniency for her daughter's rapists by standing in the streets of Hunan Province's Yongzhou city, blatantly flouting laws against protesting.

She allegedly "blocked cars and the entrances of the buildings and shouted out loud" according the police statement and the Daily Beast. She “seriously disturbed social order” and “caused extremely bad social influences" and was arrested and sentenced – without a formal trial – to 18 months at a labor camp for reeducation.

The case brought a flurry of criticism from citizens on the internet, who took to blogs and microblogging site Weibo, as well as in mainstream, state-run media, and China has apparently acquiesced today, releasing Tang after reviewing her appeal.

According to an AP report from Beijing, China's official news agency has said the woman was released after the labor camp decided she was needed to care for her daughter, who is now 17.

GlobalTimes, a Chinese news agency that was extremely critical of the situation in an op-ed on Tuesday, also noted that the Hunan Provincial Higher People's Court sentenced seven of the accused rapists in the case. Two of the defendants received the death penalty, four were given life sentences and another one received a 15-year term.

It's good news for Tang, but when it comes to forced disappearances, China still has a long way to go to maintain the rule of law and get up to par on international human rights standards.

Had it not been for a very public outcry against this case by the media and the internet (GlobalTimes reported that nearly 700,000 posts on Weibo expressed outrage and sympathy for Tang), she might have faced the same fate as countless other "criminals" or "troublemakers" China seeks to make disappear every year.

"The Chinese government already routinely uses state security charges against perceived critics and dissidents, and the incidence of enforced disappearances has sharply risen in recent years," said Human Rights Watch in a statement against a legislative provision that would further deteriorate the legality of systemic detention of activists like Tang.

Nicholas Bequelin, a Hong Kong-based senior researcher for Human Rights Watch said to the Daily Beast, “The police have a very expedient system for making people they consider troublesome disappear without any kind of due process."

More from GlobalPost: US, China are all talk on human rights

It is noteworthy, however, that Tang was released; this on the heels of human rights talks with the US last month and a lengthy Human Rights Action plan issued by the government in June. Whether China really is trying to reign in the abhorrent policies long in place, or if Tang's case is a fluke, is anyone's guess.

But one thing's for sure: this isn't the China we once knew.

Photo above: Tang holds up a message asking for help for her missing daughter. The shot circulated Weibo rapidly and was shared across the internet.

For more of GlobalPost's coverage of women and justice around the world, check out our Special Report "Life Sentence: Women & Justice in Afghanistan."