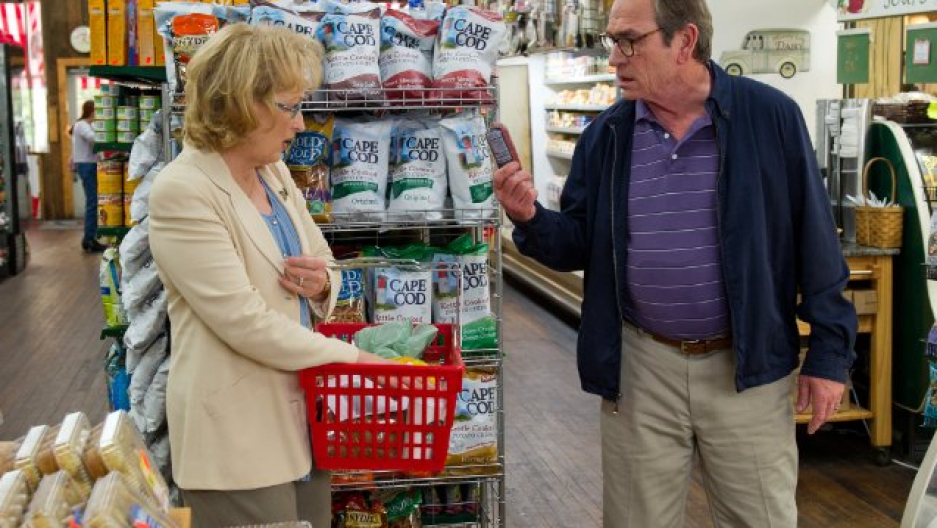 Hope Springs stars Meryl Streep and Tommy Lee Jones as a couple trying to reconnect. It's in theaters this weekend. (Photo by Barry Wetcher/Song Pictures.)

Three big films hit the big screen this weekend and the cross the gamut of topics: from seniors (not) having sex to an action-adventure chase flick that builds off its three predecessors.

Even worse, though, Guzman said it's not a good film, setting aside the bait-and-switch.

"It is a really, talky, dragy, boring, boring thriller," he said.

As bad as Bourne was though, Hope Springs, starring Meryl Streep, Tommy Lee Jones and Steve Carell, was the exact opposite.

"It's really funny and certain moments and it's really touching at certain moments," said Kristen Meinzer, culture producer for The Takeaway. "I heard people guffawing with recognition and laughter during the first half, and by half-way through, the middle-aged man sitting next to me was sobbing."

"It's much more of a tender, funny comedy and romance," he said. "This is actually, I think, Meryl Streep's most, frankly, sexual role. I've never seen her do some of the things on screen that she does."

The other big opening this weekend is Will Ferrell and Zack Galifianakis in The Campaign, about a bumbling politician's effort to win elected office.

"I think the funniest part about this movie is all they really have to do to get laughs is just behave like actual politicians," he said.

Meinzer agreed, and said the best parts come in moments inspired by actual campaign flubs. For example, in a synagogue, Galifinakis calls a yarmulke and yamaha.

"Not too different from Mitt Romney calling a Sikh, a sheikh," Meinzer said.