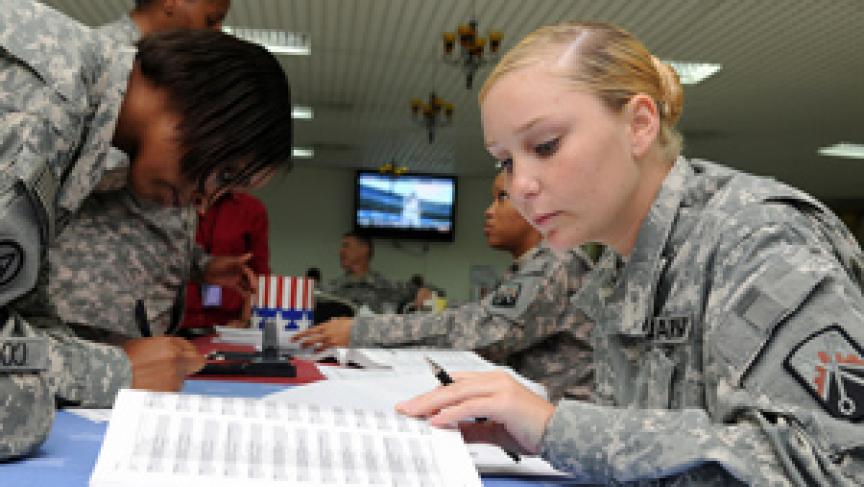 Share
One of the standard questions in the Gallup daily tracking poll is "are you a veteran?" So the organization has built up a large sample of veterans and their views over the past few months. When it comes to voting preference, the presumptive Republican nominee has a clear edge, says Frank Newport, Gallup's editor in chief. "Basically, we have veterans skewing significantly for Romney, non veterans actually skew more to Obama but by a much smaller margin, and then when we put it all together the sample is even." So could vets potentially swing the election? "They certainly could, in the sense that if we took out veterans from the population, said you can't vote, and only non-veterans voted, Barack Obama would be winning by four points in this sample," Newport says. Of course, that's not going to happen. And Romney's veteran edge might be a function of selective demographics: most vets tend to be old and white, and older white folk tend to be Republican. But the conventional wisdom holds that the military itself tends to be politically conservative. Heidi Urben, a professor at West Point, decided to get some hard data. She studied the attitudes of the officer corps, and found that about 60 percent said they identify with the Republican party. "That's typically the soundbite that you hear anecdotally or in popular news accounts and that's been fairly steady over time," she says, hastening to add, "but when you dig a little deeper you see there's a more complex story there." It turns out that the majority of those who called themselves Republican were less partisan, and more centrist. "The majority of officers would be described as 'weak partisans': not having really intense, strong partisan attitudes," Urben says. "Most are weak partisans or independents. And that's something you don't hear reported as much." This may be due to the culture of the US military, which drills the non-political ethos into soldiers, and even discourages partisan political activity. "The military has never been a place where we go out of our way to talk about or to promote political participation," says Jason Dempsey, a career infantry officer who served in Afghanistan and Iraq. He grew frustrated with the way he saw the Army portrayed in the media. "The view of the military as partisan or active politically never matched my experience, my day to day experience in the Army. Election days come and go and you may or may not notice it." Dempsey decided to do his own research into the opinions of soldiers, documented in his book, "Our Army". He found the rank and file vote at lower rates than civilians. Voting rates are higher among the officer corps. But officers are a very small slice of the military. "The majority of the military is made up of young men–the 18-25 year old demographic," says Dempsey. "And I can tell you, there's a lot of things that young men in that age group are passionate about. Politics isn't one of them." But has 10 years of war somehow altered political attitudes or behavior in the military? That question actually motivated Heidi Urben's research. The answer, in a word: No. People are leaving the military with pretty much the same views they had going in. "You have a great experiment here, with two protracted wars that really don't have a huge impact on how we think about issues of public policies and politics," Heidi Urben says. 70 percent of the officers Urben studied reported no change in party affiliation. She says she found, "attitudes within the officer corps are very stable. And are formed relatively early in life." It would be absurd to say that serving in the armed forces during wartime doesn't change a person. But it seems campaign managers face a stiff challenge in getting military voters to change their political opinions.