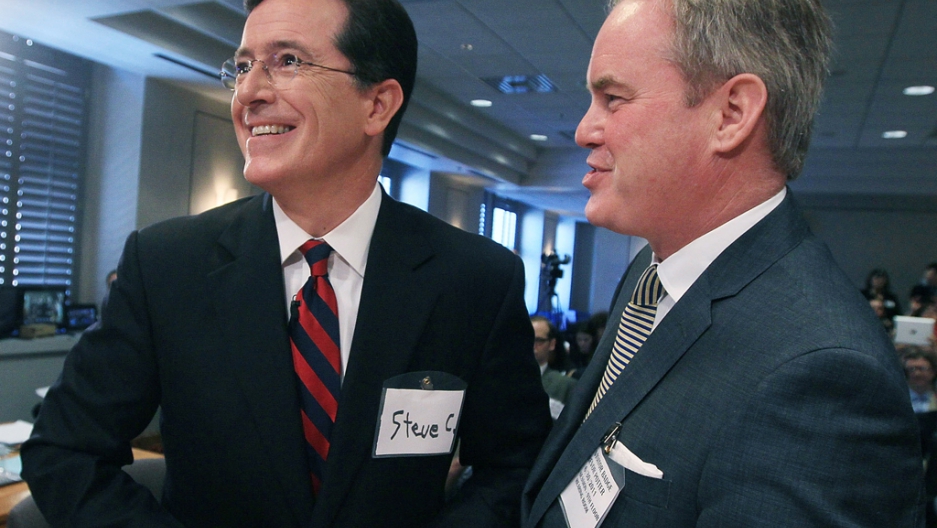 WASHINGTON, DC - JUNE 30: Comedian Stephen Colbert (L) stands with his attorney Trevor Potter during an appearance before the Federal Election Commission (FEC) to ask for a media exemption to create a political action committee (PAC) on June 30, 2011 in Washington, DC. Colbert was given the go ahead from the FEC to launch a super political action committee to raise unlimited amounts of campaign cash for the upcoming 2012 political season. (Photo by Mark Wilson/Getty Images)
Credit: Mark Wilson
Share

Comedian Stephen Colbert told his fans to go to town on Republican Wikipedia pages, and Wikipedia has responded by locking the pages, BBC News reported.

Colbert was ridiculing a Fox News report speculating on who Mitt Romney's VP pick will be. The Fox News clip, played on Colbert's show this week, notes a last-minute jump in edits to Sarah Palin's page four years ago before she was picked as McCain's VP candidate, techPresident reported. Colbert responded to the clip with a challenge to his viewers:"We could be looking at Vice President Season Six of Buffy-the-Vampire Slayer. So, Nation, let your voice be heard in this history decision. Go on Wikipedia, and make as many edits as possible to your favorite VP contender."

Mitt Romney's Wikipedia page is now decorated with a silver padlock to show that no new edits can be made. His potential VP picks have also had their pages locked. Matthew Roth, a spokesperson for the Wikimedia Foundation, told ABC News that the wiki page of Tim Pawlenty, for example, was put on a "semi-protected" level after the Colbert segment aired, and then was bumped to fully protected after vandalism was detected.