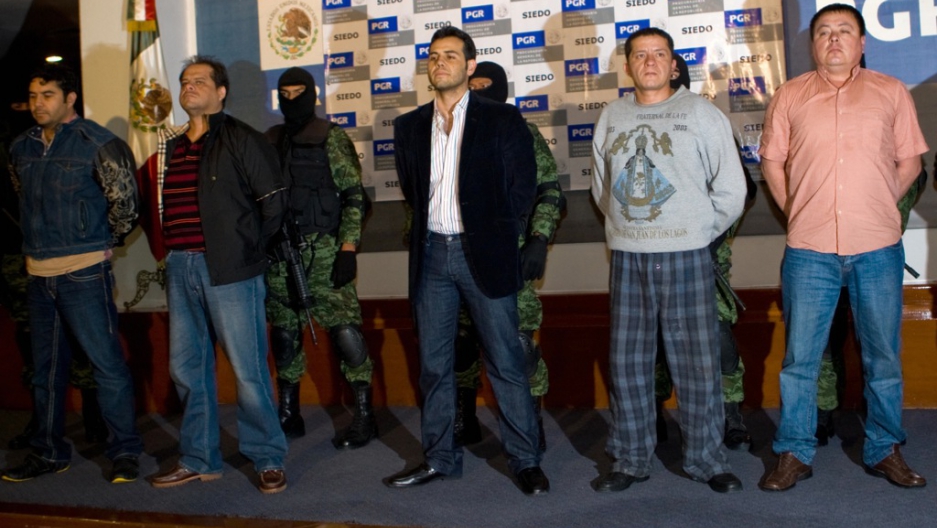 Vicente Zambada Niebla, aka 'El Vicentillo', stands at center amongst other criminals after his arrest in Mexico City in March 2009.
Credit: Luis Acosta
Share

A high-ranking member of the Sinaloa drug cartel currently in US custody alleges that Operation Fast and Furious was part of an agreement to finance and arm the Sinaloa cartel in exchange for information used to take down rival cartels, according to court documents.

The statement was made by Jesus Vicente Zambada-Niebla, the Sinaloa cartel’s “logistics coordinator” in charge of arranging massive drug shipments from Latin America to the United States as well as the son of cartel leader Ismael “Mayo” Zambada-Garcia and a close associate to kingpin Joaquin “El Chapo” Guzman.

Zambada-Niebla was arrested by Mexican authorities in March 2009 and extradited to Chicago to face drug trafficking charges.

From the court document:

"[T]he United States government at its highest levels entered into agreements with cartel leaders to act as informants against rival cartels and received benefits in return, including, but not limited to, access to thousands of weapons which helped them continue their business of smuggling drugs into Chicago and throughout the United States, and to continue wreaking havoc on the citizens and law enforcement in Mexico."

Zambada-Niebla believes that he, like the leadership of the Sinaloa cartel, was "immune from arrest or prosecution" because he also actively provided information to US federal agents.

In its official response to the discovery motion, the government stated that there are “classified materials” regarding the case but argued they “do not support the defendant’s claim that he was promised immunity or public authority for his actions.”

Zambada-Niebla's lawyer is seeking government "documents, files, recordings, notes, and additional forms of evidence" that would support claims that federal agents personally assured Zambada-Niebla that "he would not be arrested, that the agents knew of his prior cooperation ... that they just wanted to continue receiving information ... “[and] that the arrangements with him had been approved at the highest levels of the United States government."

Zambada-Niebla was allegedly arrested five hours after he met with the federal agents.

Jason Howerton of the website The Blaze reports that the documents detailing the relationship between the federal government and the Sinaloa Cartel "have still not been released or subjected to review — citing matters of national security."

The motion for discovery claims that the agreement between the US government and the Sinoloa cartel began sometime before 2004 and lasted at least until March 2009 as part of America's "Divide and Conquer" strategy against other cartels, in which the US would use "one drug organization to help against others."

From the court document:

"Under that agreement, the Sinaloa Cartel under the leadership of defendant’s father, Ismael Zambada-Niebla and “Chapo” Guzman, were given carte blanche to continue to smuggle tons of illicit drugs into Chicago and the rest of the United States and were also protected by the United States government from arrest and prosecution in return for providing information against rival cartels which helped Mexican and United States authorities capture or kill thousands of rival cartel members."

Zambada-Niebla's trial is scheduled to begin on Oct. 9.

Howerton notes that while experts have doubted that Zambada-Niebla had an official agreement with the US government, the defense wants to put the agents on the stand, under oath, to testify about the Sinaloa-US relationship.

Business Insider: German Chancellor Merkel Might Not Be Able To Resist Breaking Up The Euro

Business Insider: Spanish Union Workers Are Stealing Food From Supermarkets And Handing It Out To The Poor

Business Insider: How Each Failing Eurozone Economy Affects The Others

Business Insider: The World's Largest Toy Supplier Plunges, And Says Things Aren't Good In The US And Europe