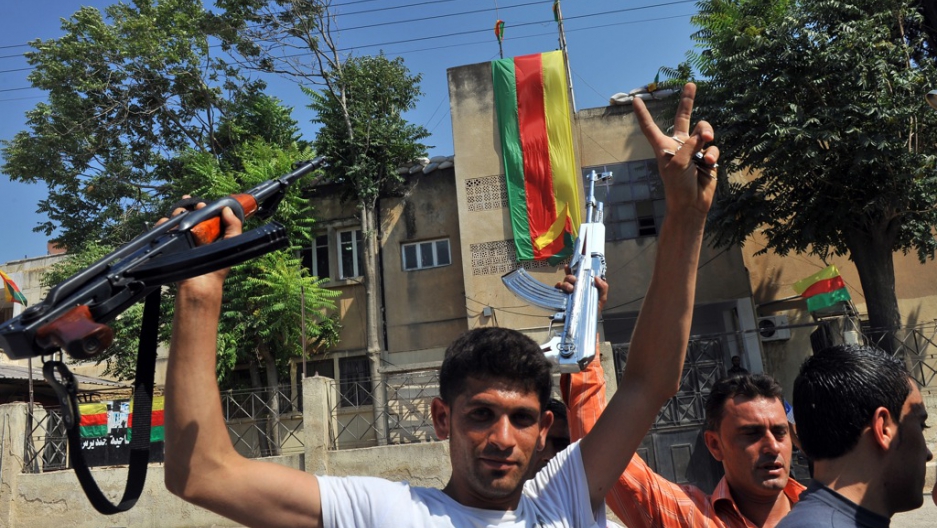 Syrian Kurds hold their rifles, as they flash the sign for victory, in the Kurdish town of Jinderes, near the northern Syrian city of Aleppo, on July 22, 2012, as Kurdish activists on the Syria-Turkey border started taking control of towns in the area without encountering much resistance from the forces loyal to Syrian President Bashar al-Assad.
Credit: Bulent Kilic
Share

KOBANE, Syria — Life just got a lot more complicated for Kurds in this town on the Syrian-Turkish border.

First, what do they call their town? Do they live in Ayn Arab, as the Assad regime told them, after moving thousands of Arab families to the area to dilute its Kurdish majority?

Or do they call it Kobane, the Kurdish name the townspeople use, but which doesn’t show up on any modern Syrian map?

Then there’s the more vexing question of which country they inhabit. Are they residents of Syria, 90 miles northeast of Aleppo? Or do they live in western Kurdistan, that great leg-shaped swath of Kurdish dominated territory, part imagined, part realized, stretching from the mountains of southeast Turkey across the western edge of Iran and deep into northern Iraq?

And finally, after Syrian troops pulled out of Kobane recently, which flag should they have flown in this newly “liberated” town? The green-striped flag of the Syrian revolution, which many Kurds say they support? Or the yellow sun flag of Kurdistan, which now flies in northern Iraq?

With attention focused on Assad’s life-or-death struggle with Syria’s largely Sunni Arab opposition, recent moves by Kurdish leaders to assert their autonomy have added a layer of complexity that could ultimately decide the status of a large portion of post-civil war Syria.

Kurdish independence aspirations are a major issue in the region, where the ethnic group dominates large swaths of Iraq, Iran, Syria and Turkey. The Syrian conflict is already fueling tension among these neighbors, with Iran blaming Turkey on Tuesday for supporting anti-Assad rebels.

“We should learn from what happened in Iraq. We too have the right to run our Kurdish region as we want,” Jawan, a member of Syria’s Democratic Union Party, known by its Kurdish initials PYD, told GlobalPost.

More from GlobalPost: Who are the Kurds? An Explainer.

The group is the Syrian branch of the radical Kurdistan Worker’s Party, the PKK, which has fought a 28-year separatist war in Turkey in which more than 40,000 people have died. Turkey, the United States and the EU consider the PKK a terrorist group.

“For decades we have been calling for our cultural and political rights. Today we should take these rights by our own hands,” Jawan said.

Many Syrian Kurds have long yearned for the kind of autonomous self-rule now enjoyed by their brethren in Iraq. Kurds here have long felt oppressed under four decades of Assad rule. They are banned from speaking Kurdish, often tortured in prison for organizing politically and have been stripped of much of their best farmland.

More from GlobalPost: Can the Kurds tip the scales in Syria?

After remaining largely on the sidelines of Syria’s uprising, Kurdish leaders see in the Syrian conflict an opportunity to exert their independence, not just from the Assad regime but also from the opposition.

“We don’t want our Kurdish regions to be a battlefield for Assad’s forces and the Free Syrian Army and we don’t expect much from the Syrian National Council. We want to be secure and away from problems,” Jawan said.

But if Kurds see a chance for autonomy, their fractious internal politics may prevent them from forging the unified front needed to seize the opportunity.

The conflict between Jalal Talabani’s Patriotic Union of Kurdistan (PUK) and Massoud Barzani’s Kurdistan Democratic Party (KDP), largely based on tribal rivalries, has defined Kurdish politics since the 1970s. Talabani is now president of Iraq, while Barzani heads the Kurdistan Regional Government (KRG) in northern Iraq.

In Syria, despite being banned from politics, Kurds are divided into at least a dozen parties that not only compete for leadership of their community but also diverge on existential questions, such as how hard to push for autonomous self-rule and whether to oppose or cooperate with the Assad regime.

More from GlobalPost: Battle for Aleppo in Photos

Kurdish militiamen have been accused of breaking up Kurdish anti-regime protests in northeast Syria, leading many to view them as operating on behalf of the Assad regime.

“[Kurdish] militia shot into the air and beat up protesters,” an anti-Assad Kurdish activist from Afrin told the IRIN news agency recently.

So when Syrian troops pulled out of Kobane late last month, what was heralded as the “liberation” of the first town in Western Kurdistan by some Kurdish media was met with suspicion by others.

For Jawan, the Syrian withdrawal represented the “first step to self-determination” for Syria’s Kurds. The Kurdish Democratic Union Party, he said, had “seized” the town from Assad’s security forces.

“One dictatorship has replaced another,” he told IRIN.

The Kurdish Democratic Union Party’s formerly close ties to the Syrian regime have left many Kurds suspicious of its motives. Since the uprising began in March 2011, observers estimate between 1,000 and 2,000 members of the group have crossed into Syria from their base in the Qandil Mountains along the Iraq-Iran border.

With the tacit consent of the Assad regime, Kurdish militiamen began establishing checkpoints and local councils, which stretched from Qamishli in the northeast tip of Syria right into Aleppo, the capital of the north where regime troops are now fighting Free Syrian Army rebels.

“We organize all security measures without any interference from the regime,” a 28-year-old Kurdish militiaman in Aleppo’s Sheikh Maqsoud district told GlobalPost. “We have been armed for a long time because most of our members train with the PKK.”

Across both neighborhoods, Kurdish fighters carried arms in public in the daytime, something unthinkable only this time last year when the Assad regime was still largely in control of northern Syria. GlobalPost saw no visible sign of the Assad regime’s presence, as police stations flew the red-starred flag of the Kurdish Democratic Union Party.

“We won’t let either the regime or the Free Syrian Army come into our area,” said the Kurdish fighter. “We have our plans for the post-Assad era.”

Those plans are meant to include all other major Kurdish parties in Syria.

According to the terms of a recent deal hammered out in Erbil by Barzani on July 11, all major parties will work together to secure Syria’s Kurdish regions.

But according to a spokesman for the Kurdish National Council, Abdulbaqi Yousef, when its activists raised the golden sun flag of Kurdistan in Kobane, it was swiftly pulled down by armed militiamen from the Democratic Union Party, who replaced it with their red-starred party flag.

The switch provided a graphic illustration of the mistrust that pervades Kurdish politics in Syria. Indeed, some are suspicious of where allegiances lie.

“The PYD [Democratic Union Party] takes its orders from the Assad regime. We call them the Kurdish shabiha,” Ibrahim, a member of the Kudish National Council in Kobane, told GlobalPost, referring to pro-regime mercenaries.

“There was no liberation here, but a handover from the regime to the PYD. Assad wants to kill two birds with one stone: Incite an Arab-Kurdish conflict; and threaten Turkey that, if Assad goes, the Syrian Kurds will announce an independent state and then the Turkish Kurds will do the same.”

Issa, a Baath Party school teacher and member of a large Arab tribe from the Arab belt of villages that surround Kobane, told GlobalPost that he understood Kurdish grievances. But he rejected any move toward Kurdish self-rule.

“Syria should be for all, but Arabs are the majority,” he said. “I don’t think the Arab tribes would ever accept splitting off part of Syria and putting it under rule from Erbil.”

Turkey has already reacted strongly to the Kurdish moves, staging exercises with 25 tanks along Turkey’s southern border, the first such exercises in the area for more than a decade.

More from GlobalPost: Erdogan: Kurd rebels inside Syria will not be tolerated

Turkey’s Foreign Minister flew to Erbil to extract a joint statement from Barzani that “any attempt to exploit the power vacuum (in Syria) by any violent group or organization will be considered a common threat” between Turkey and the Kurdistan Regional Government.

Yet even as the international dimension of Syria’s Kurdish conundrum was heating up, Barzani told Al Jazeera that the Kurdish Regional Government had been training its own Syrian fighters near Erbil, ready to dispatch back to Syria to fill the “security vacuum.”

The International Crisis Group estimates that about 650 trained fighters from northern Iraq are ready to return to Syria. Analysts said the training had been coordinated with the Kudish National Council as a hedge against the rising power in Syria of theDemocratic Union Party, raising the prospects of inter-Kurdish violence.

“We should block these efforts by the Assad regime to create marginal conflicts between Kurds, our Arab brothers or Turkey,” said the Kurdish National Council’s Ibrahim. “We are struggling to get freedom for all Syrians, not just Kurds.”

But riven with rivalries and long exploited in the proxy warfare of the Middle East, the path to freedom for Syria’s Kurds looks anything but smooth.

“A major factor of instability has thus been added to an already volatile region,” said Patrick Seale, a veteran historian of Syrian affairs. “The Kurdish pot is simmering. If it boils over, it risks scalding everyone within reach.”