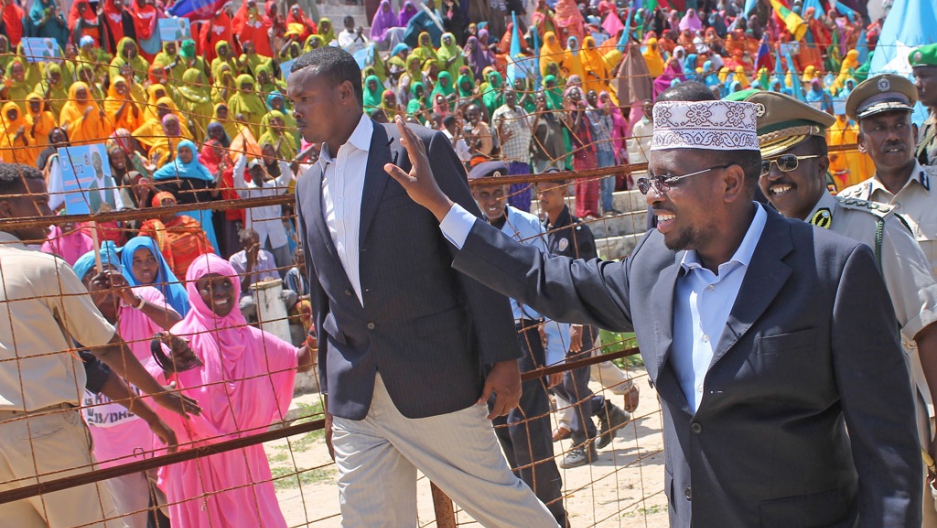 The president of Somalia Sheikh Sharif Ahmed waves to hundreds of Mogadishu residents at a ceremony marking the first anniversary of terror group Al-Shabab's withdrawal from Mogadishu at Konis Stadium in north of the capital on August 6, 2012. In a field of dozens of candidates, Ahmed is confident of re-election later this month.
Credit: Mohamed Abdiwahab
Share

MOGADISHU, Somalia — In a field of dozens of candidates, President Sheikh Sharif Ahmed is confident of re-election later this month.

It’s a sign that while in many ways everything is changing for Somalia, in other ways nothing is.

“I believe I am a strong candidate and I am very confident I will win,” the transitional leader said in an interview in Mogadishu. “We are coming to the end of the transition and beginning the process of full government for the first time in 20 years.”

In Mogadishu’s corridors of power, all the talk is of “ending the transition.” The political jostling is frenetic. But widely reported corruption is dashing the hopes of many here.

Overlapping wars ripped Somalia apart for more than two decades, since the collapse of the last stable government in 1991. They’ve now been replaced by a fragile peace that has held in the capital for most of the last year. It has allowed businesses to flourish and Somalis to resurrect their daily lives without the constant fear of violent death.

While terror attacks are still frequent in Mogadishu and Al Shabaab militants, who are affiliated with Al Qaeda, still control much of the countryside, a feeling of hope is ever-present on the capital’s streets.

On Aug. 20 the UN-backed Transitional Federal Government will be replaced by something else, most likely called the Interim Government of Somalia, according to Augustine Mahiga, the top UN diplomat for Somalia.

For now, power rests with 135 traditional clan elders selected by a UN-backed committee to guide the transition. It was these elders who appointed the 825 delegates to a constituent assembly that this month voted in favor of a new draft constitution.

The same elders will choose the 275 members who will make up the country’s new parliament. These lawmakers will then elect a speaker and a president by Aug. 20, who will then choose the prime minister and cabinet.

Parliament’s four-year term is expected to culminate in the passing of Somalia’s new constitution and the holding of national elections.

“Aug. 21, 2012 will be a new dawn for Somalia [with] a new federal constitution, a new political dispensation, a new parliament and a new government, that will take Somalia to the next level,” he said.

Not everyone shares the prime minister’s optimism.

The weakness and venality of the transitional government has been a constant source of criticism since its creation eight years ago. In July, a UN report found that as much as 70 percent of the government’s budget could not be accounted for. A World Bank report earlier this year came to a similar conclusion.

“We have to improve our governance structures and public finance management,” Ali admitted.

The transitional president — who was among those singled out by the UN report — denied the allegations.

“Absolutely false,” he told GlobalPost. “My conscience is clear, I know what I have done.”

He dismissed the 330-page report by the UN Monitoring Group on Somalia and Eritrea as based on “rumors and hearsay.”

As Ahmed spoke, a two-tone silver and gold Rolex watch glinted on his wrist.

“A lot of people don’t understand that after 20 years of problems, institutions were non-existent, you can’t change that overnight. You fight corruption by having strong institutions that function fully,” he said, arguing that his government had begun that process.

“Today you can visit government ministries, in their own offices!” Ahmed said. Like other current power brokers, Ahmed has no intention of stepping aside.

As the coming weeks unfold, a lot depends on those traditional elders in whom foreign donors have invested so much hope. But in Somalia few in authority are beyond reproach.

In describing how Al Shabaab used to run its finances and maintain control of a stronghold outside Mogadishu, one defector from the group explained that they would “buy” local elders for $500 a month.

“The traditional elders are authorities, they are orators who could persuade the public to support Al Shabaab,” he continued. “We used those elders. None of them refused.”

Many Somalis believe that those now in power have simply stolen government money in order to purchase the support they will need to stay in power.

“We need a new culture of leadership in Somalia that doesn’t resort to corruption or induce it,” Mahiga said. “The beginnings of the rule of law must be the character of the next dispensation.”

For now it is unclear whether the political shifts underway will be enough to bring about that change. Mahiga recently felt compelled to issue a statement in which he warned of “disturbing reports of undue influence from aspiring politicians.”

“We should not allow parliamentary seats to become commodities for sale or items for auction to the highest bidders,” he said.