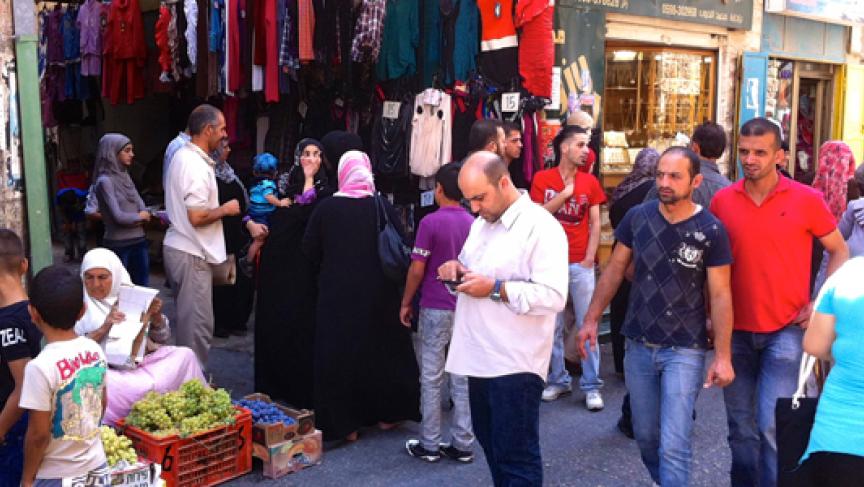 Nancy Zaboun was allegedly murdered in this Bethlehem marketplace by her husband last week. (Photo by Matthew Bell.)

The victim was 28-year-old Nancy Zaboun, a mother of three young kids. Their father, Nancy's husband, is the suspected killer.

What made the murder so shocking to so many Palestinians was that it took place in the middle of the afternoon in a busy Bethlehem marketplace.

One week later, a steady stream of grim-faced visitors strolled by the scene of the crime, right in front of a women's clothing shop. They asked shopkeepers if this was really the spot where Zaboun was murdered.

A young woman in a flowered headscarf grasped her cell phone nervously. She said her name was Huwaida and that she felt nauseated just standing here. She had seen everything.

"It had happened right in front of me," Huwaid said. "I saw him as he pulled her against the wall and put the knife against her neck and killed her. He slaughtered her like a sheep."

Kifa'a Zaboun, Nancy's cousin, said the the family knew the couple was having problems.

"We had heard that he was abusing her," he said. "But not with the details that we found out later. We knew that she had asked for a divorce. And we had thought that this is the end of the problem."

He said people should be happy. If couples were not happy together, they should get a divorce, he said. The problem was that Palestinian laws didn't make it easy for a woman to divorce her husband.

Khawla Al-Azraq, the director of a women's center in Bethlehem, said she felt more emotionally involved in Zaboun's case than any of the countless others she had come across. That's because Nancy walked into Al-Azraq's office in June. A few weeks later, she was dead.

Al-Azraq said Nancy kept repeating that she had just one hope.

"She had one dream, to get (a) divorce from this man and to have a separate house with her children," Al-Azraq said. "All the time she was worried about her children."

Last year, Palestinian President Mahmoud Abbas signed a decree to put an end to so-called "honor killings." That is when a relative kills a woman for bringing shame to the family name.

But Al-Araq said Abbas needed to send a much stronger message that violence against women would not be tolerated. She wants Palestinian leaders to come up with new, tougher laws against domestic violence.

"If we need to wait until we do this social change, many, many women will be killed," she said.

Women's activists say another problem is that Palestinians living under Israeli rule do not have civil or family courts to handle divorce cases. Religious sharia courts have jurisdiction over these issues.

Somoud Damiri, a prosecutor at the sharia court in nearby Ramallah, is well aware that women’s groups criticize the religious court system for being too slow to grant divorces.

Damiri said she agreed that some laws needed to be updated. But the root of the problem, she said, was social, not legal. Women seeking to divorce an abusive husband often don't get support — especially financial — from their relatives and get stuck.

Damiri said she saw it happen all the time.

"The women in Palestine haven't any financial protection," Damiri said. "This is the (biggest) problem."

Damiri said she had seen many Palestinian women go back home to live with the husbands they wanted to divorce, because their own families either can't or won't support them and their children. She added that the case of Nancy Zaboun had nothing to do with honor.

"This was a murder," she said.

Zaboun's cousin agreed. He said the family had written to the Palestinian president asking him to make an exception to current practice and give Zaboun's husband the death penalty.

If justice is not done for this murder, he says, Zaboun's relatives might take the law into their own hands and seek retribution against the husband and his family.