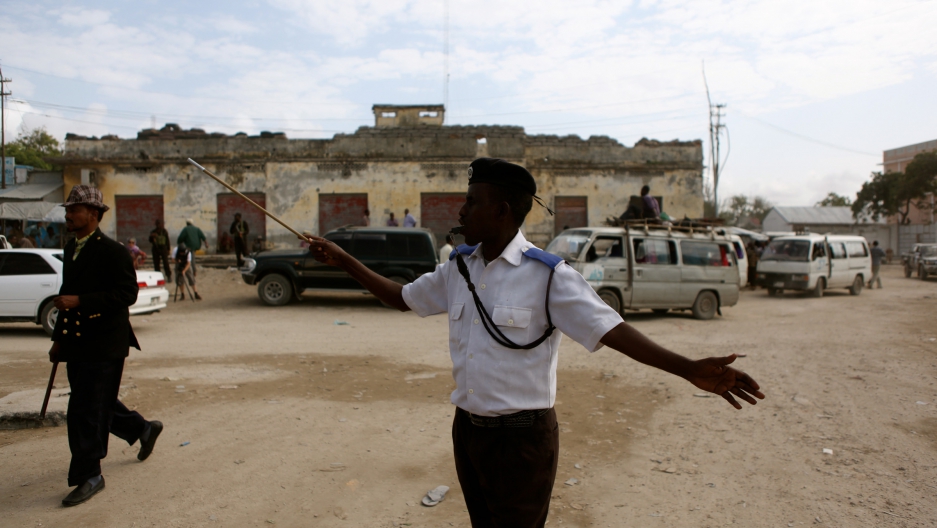 In a sign that a kind of normality is returning to Mogadishu, a traffic policeman directs vehicles at the city's main 'K4' roundabout.
Credit: Tristan McConnell
Share

MOGADISHU, Somalia — Maj. Ali Mohamed Salal is the commander of one of 16 district police stations in Mogadishu.

He has 150 disheveled officers, three stinking prison cells and one battered vehicle. Until a couple of weeks ago he hadn’t been paid his $150 salary in eight months.

“It’s not right but we are obliged,” said Salal, a sliver of a man with a mischievous grin. “We have to go hungry while we try to build the country.”

His immediate boss, a colonel with a gold-colored plastic belt buckle featuring a row of bullets and a superimposed dollar sign, nods in agreement. He stands next to a police pick-up truck with two bullet holes in the windscreen and one in the roof, evidence of the dangers of upholding the laws in a city accustomed to not having any.

In August of last year, African Union and Somali troops finally cleared the city of Al Qaeda-aligned Al Shabaab, which had harshly ruled most of the city since 2007. With the war now over, securing Mogadishu increasingly falls to the poorly-equipped and sporadically-paid police force.

“We don’t have the equipment or the power to carry out our role. We are just putting out fires,” Salal said.

Rape and sexual violence are commonplace in the informal settlements that still scatter the capital a year after famine forced hundreds of thousands from their homes. The police are unable, or perhaps unwilling, to do much to stop it.

Mogadishu Mayor Mohamed Nur admits the police lack “skills and equipment.” Many officers are beyond retirement age, he said, are poorly paid, lack vehicles and are outgunned by militants.

“A police force like that? They cannot protect the population,” Nur told GlobalPost.

A government-controlled checkpoint in Afgoye, 22 miles outside the city, is run by an assortment of armed men in a variety of uniforms — police, traffic cops and soldiers. A young truck driver, stopped in a line of vehicles while papers and cargo are checked, complained of extortion, an allegation repeated by others in the city.

“They are asking a lot of money, more than 1.5 million Somali shillings [about $70]. It’s extortion!” said 19-year-old Abdifatah Omar.

Under a patchwork tarp slung over the rickety truck’s back were piles of sugar, rice and cooking oil destined for Baidoa, 150 miles away. Omar said that when Al Shabaab ran the checkpoints, traders paid once and were given a receipt that allowed them to pass all the other roadblocks. Now he had to pay bribes at every stop.

“Under Al Shabaab we paid a half or a quarter of the amount the government takes,” he complained. “Now [the government forces] either rob us or threaten our lives.”

Close to the checkpoint — little more than a pile of rocks, a piece of string and a bunch of guys with guns — Kafra Ibrahim runs a small shop selling batteries, biscuits, bottled water, canned food and tea bags. Ibrahim said that while her business had improved, safety had not.

“In terms of security, Al Shabaab was better,” she said. “Al Shabaab was more disciplined. They never harassed you. They did not come into town with their guns. But now you can see all the government people have guns and they fight each other.”

People who kept their heads down in Al Shabaab-controlled neighborhoods lived in safety, but not freedom: security was maintained by a menu of brutal public punishments and executions. Even the suspicion of being against the insurgents would lead to death.

There is no doubt that Somalia’s security forces are an ill-disciplined bunch  — with the exception of the specially-trained ninja-like storm troopers of “Alpha Group,” a masked commando squad with an anti-terror mandate.

But efforts are underway to address that.

At Jazeera training camp, which is nestled among the dunes overlooking the Indian Ocean south of the capital, 600 recruits to the Somali National Army are put through their paces. They march in formation across the sand, smartly dressed in new uniforms, desert boots and caps with bright Somali flag patches sewn on their left sleeves.

All have recently returned from months of training in Uganda, part of a European Union-funded effort to professionalize Somalia’s army.

“After basic training is given they are better disciplined, it is a matter of military culture,” said Col. Abdi Hamid, the officer in charge of Jazeera.

There is still a long way to go, as Brig. Paul Lokech, a senior officer of Africa Union peacekeeping mission, concedes.

“We are training and mentoring the Somali National Army. We are seeing improvement.”

He refused to say when they might be considered “professional.”

More from GlobalPost: Somalia gears up for political transition

It will be some time before armed men cease to be a common feature of life in Mogadishu. But with Al Shabaab gone, there is an opportunity to rein in the chaos, Salal said.

“Somali people lived in violence and lawlessness for 20 years, now law and order is returning,” the police officer said.