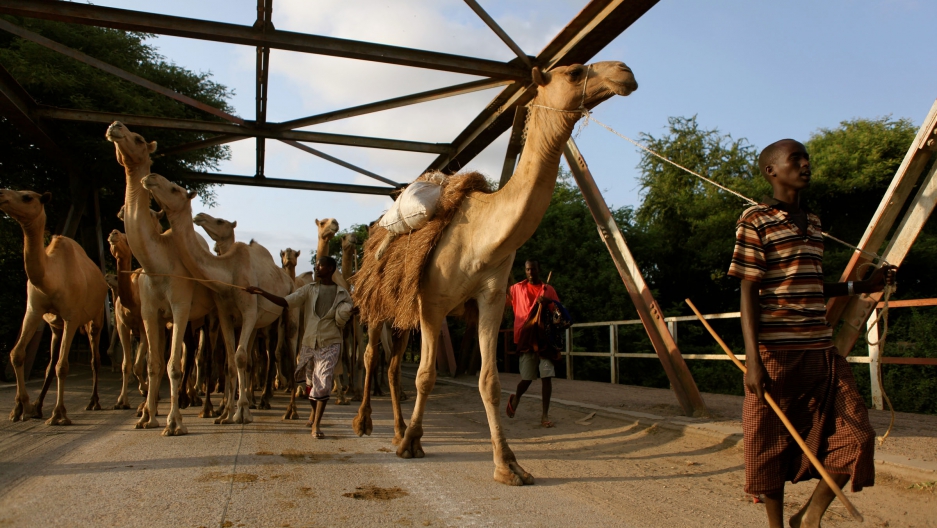 As the day ends, a herd of camels is led across a bridge over the Shabelle River in the town of Afgoye, outside Mogadishu.
Credit: Tristan McConnell
Share

MOGADISHU, Somalia — Liban Egal grew up amid the oily clatter of hulking iron letterpresses in his father’s shop behind one of Mogadishu’s main junctions. Daha Printing Press, opened in 1967 and named after his sister, is still there and so are the vintage machines.

After years in self-imposed exile from Somalia’s violent anarchy, Egal, like others in the far-flung diaspora, has come home hoping to put an end to his country’s reputation as a “failed state” and make some money while he’s at it.

Although he was born into printing, Egal sees his future in financial services. Capitalizing on the opening up of Mogadishu, which has enjoyed relative peace in the last year, he opened Somalia’s first private bank.

“Printing is in our blood,” said Egal, 43, whose uncle manages the business. As a teenager, Egal would hurry back from high school to manage the evening shift, watching over the production of government documents, ID cards and ledgers.

There are Central Bank account books from the time of President Mohamed Siad Barre, whose ousting in 1991 kicked off two decades of war. And there are identity documents from the subsequent warlord era of Mohamed Farrah Aidid, whose forces killed 18 US soldiers in 1993 during a battle made famous in the book and film Black Hawk Down.

“I get emotional when I come here,” Egal said as he sifted through the dusty papers. “It’s where I grew up, where I learned to work.”

For years Egal worked in the United States. He had left Somalia for Germany in 1986 to learn the printing trade and two years later went to university in Maryland. Soon after, civil war erupted in Somalia, leaving Egal stranded in America, cut off from everything he had known.

In Baltimore, he made a home and started a business, first with a chain of fried chicken joints and later with a check-cashing business. By 1994 he had saved enough money to fly his mother, sister and two little brothers out of Somalia’s chaos.

“When the war broke out the family that had supported me needed my support,” he said.

From cashing checks for the poor in Baltimore, he moved into money-lending and real estate, getting out of the housing market just months before the 2008 property crash that triggered the world economic crisis.

Egal, like many others in the diaspora, was by then yearning for home and looking for signs of peace. For two years he danced around Somalia, getting ever closer to Mogadishu. He first landed in Djibouti, then moved to Nairobi and eventually Somaliland, the stable semi-autonomous northern region of the country.

By the time he returned to Mogadishu last August he had big plans. In addition to opening the country’s first privately owned bank, he now owns a survey-based research company, a wireless broadband provider and a mobile money-transfer system.

His flagship First Somali Bank opened in May and although it only has 200 account holders with about $20,000 in deposits, its client base is slowly growing. One of his best customers is Ahmed Jama, a British-trained Somali chef who runs one of the city’s most popular restaurants and has outsourced his financial management to Egal.

Another potential customer turned up in the tiled main hall of his bank on a recent Thursday morning.

Emrah Erbas is a business manager for Alliance Constructions, a Djiboutian-Turkish joint venture. He was looking for a partner and advisor. He is one of a slew of Turkish entrepreneurs entering Mogadishu on the back of Turkey’s hefty aid program, begun at the height of Somalia’s famine last year. Turkey’s aid has fed and housed tens of thousands, winning political favor and widespread popularity that Turkish businesses are now cashing in on.

“I’ve worked in Iraq so this is not so dangerous for me,” said Erbas, who hopes to win contracts for both government and private buildings.

Business from the likes of Jama and Erbas is important revenue for the First Somali Bank. But for Egal’s bank to truly succeed, he says he will need to attract ordinary Somalis. For most average people here, banks are almost unknown.

“Somalia is a cash-based society,” he said. “You have to teach people the concept of banking.”

More from GlobalPost: Somalia gears up for political transition

The state’s fundamental institutions are also in tatters after two-decades of civil war. The courts don’t work, laws have lapsed and black market traders in the city’s unregulated Bakara Market fix exchange rates.

The rate is now about 22,000 Somali shillings to the US dollar. The one thousand shilling note is the only one in circulation, meaning a pile of crumbling notes is needed to buy a single bottle of water.

And then there is the difficulty of navigating Somalia’s trust-based clan system, a network that can be a trap to the uninitiated.

It is a lesson Egal learned as a young man watching his late father, and then his uncle, run the printing press. Next to a German-made 1940s letterpress are piles of papers printed for a series of now-defunct governments who never paid their bills.

“All of these documents you see here: we got burned,” he said. “Now there’s no credit for anyone, especially not the government because they don’t ever pay.”