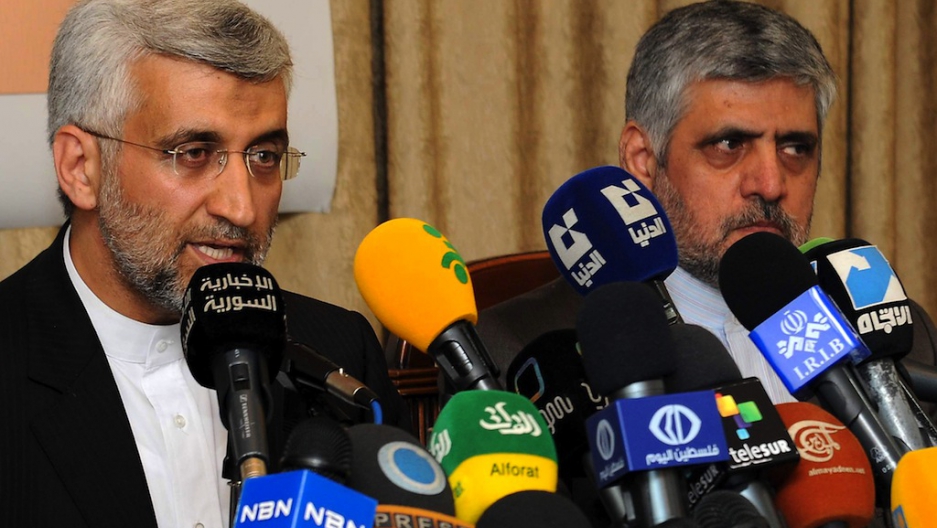 Saeed Jalili, head of Iran's supreme national defence council, holds a joint press conference with Iranian ambassador to Syria Mohammad Reza Sheibani (R) at the Iranian embassy in the Syrian capital Damascus on August 7, 2012. Tehran will continue to back Syria under President Bashar al-Assad, which acts as a pillar of an Iranian-led regional alliance, Jalili told Assad in Damascus.
Credit: Stringer
Share

The 48 Iranians who were taken hostage by Syrian rebels last week are all alive, an official in Iran’s foreign ministry confirmed, according to Reuters.

The rebels, who kidnapped a busload of Iranians in Damascus on August 4 on the suspicion that they were assisting the Syrian regime, claimed on Monday that three of the hostages had been killed in an air attack by the government. The rebels had also threatened to kill those still alive if army attacks did not cease, Reuters reported.

Iran admitted yesterday that some of the hostages are retired members of the country's powerful Revolutionary Guards.

"A number of the [hostages] are retired members of the Guards and the army," foreign minister Ali Akbar Salehi said after returning from Turkey, where he had asked for help securing the hostages' release, according to the Iranian Students' News Agency, reported by the BBC.

Iran has undertaken a "diplomatic offensive" this week attempting to secure the release of the hostages, the Los Angeles Times reported. That included laying responsibility with the United States for the kidnapping of the Iranian nationals. According to the Guardian, Iran sent a message to the US via Switzerland — which represents US interests in Iran — that said, "Because of the US manifest support of terrorist groups and the dispatch of weapons to Syria, the US is responsible for the lives of the 48 Iranian pilgrims abducted in Damascus."