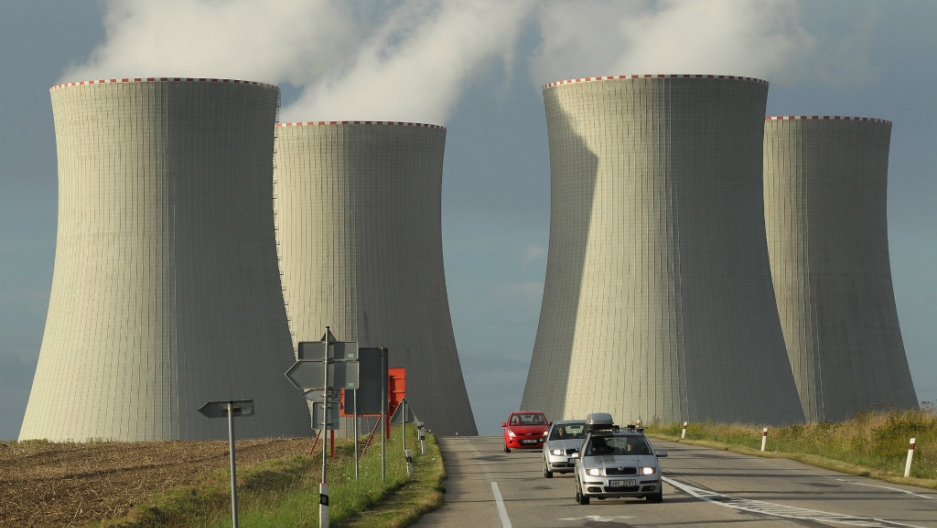 As Western Europe rejects nuclear power — Germany is phasing out its reactors after Japan's Fukushima meltdown — the Czech Republic and other Eastern Europen countries are embarking on ambitious plans to expand or upgrade Soviet-era plants.

The authorities are planning two new reactors in Temelin, in what would be the biggest business deal in Czech history.

The expansion is pitting Russia against the West in a closely watched test of transparency in this young democracy and new European Union member.

Three companies are bidding to build the reactors. CEZ, the state power company that operates Temelin, last month accepted bids from US-based Westinghouse, French Areva and a consortium led by Russian Atmostroyexport for the $10 billion tender.

The company is set to decide on the bids next year. Construction should end by 2025.

Eastern European countries are betting on an electricity deficit caused by the closure of nuclear plants in Western Europe, along with EU requirements for members to phase out coal plants to meet emission reduction targets by 2020.

“Many countries say they’ll import electricity, but they don’t say from where,” says Vaclav Bartuska, the official overseeing the tender. “That means the Czech Republic with its surplus is in a good position.”

Other countries, including Poland, Slovakia and Romania, are planning to export electricity by expanding nuclear production. Even Belarus — where many are believed to still suffer health effects from the 1986 Chernobyl disaster in neighboring Ukraine — wants in.

Pierre Lévy, ambassador to the Czech Republic from pro-nuclear France — one of the few exceptions in Western Europe — hopes the project will “rebuild trust” in the future of Europe’s nuclear industry. “There’s a lot at stake,” he says.

But Temelin is raising serious concern among anti-nuclear campaigners in Western Europe, where public support for nuclear power was already weak before the nuclear disaster at Fukushima last year.

It prompted Germany to bring forward to 2022 the date by which it has pledged to close all its nuclear plants. Italy and Switzerland followed with promises to move away from nuclear toward renewable energy.

Activists in Germany and nuclear-free Austria reject the argument that nuclear power should serve as a low-carbon “bridge” to meet electricity demand before renewable energy becomes a viable alternative.

They question the economic rationale on top of traditional objections to health and environmental risks. Falk Beyer of the German umbrella group Nuclear Heritage Network contests the predictions of an electricity surplus, saying there may be a glut of nuclear electricity providers instead.

“Finland, Russia, Poland and Slovenia all expect to sell their electricity on the European market,” he said. “It will be overloaded. The best way to deal with CO2 is not to substitute it with nuclear but to conserve energy.”

The plans for Temelin have come under scrutiny for other reasons. Although the project enjoys broad popular support, some are concerned about the role of CEZ — the Czech Republic’s largest and most influential company — in a country rife with public finance corruption.

The firm is under investigation for allegations of insider trading and breach of trust in connection with previous deals.

Although there have been no accusations of wrongdoing in the Temelin tender, former Czech intelligence director Karel Randak, who now works for the Anti-corruption Endowment Fund, says CEZ managers are “very close” to the country’s top politicians, whom they influence through shady lobbying. “The problem is that it’s not restricted by law,” he explained. “Any contact and any payments are possible, and any amount of money is normal. It’s the Wild West.”

Some critics are especially concerned about the involvement of a Russian state company at a time Moscow is using its vast energy supplies as a foreign policy tool.

The Czech online daily Aktualne.cz recently quoted an anonymous source close to the deal as saying Atomstroyexport would win the bid using its close ties to Czech firms. He cited a classified 2010 Czech counterintelligence report that warned awarding the contract to a Russian company would compromise Czech energy security because the country already relies on Russia for more than two thirds of its natural gas.

Atomstroyexport has sweetened its bid by offering financing for the project. Although analysts have warned against entering any such deals, Bartuska — the official overseeing the tender, who is also Czech envoy for energy security and an early critic of the decision to accept the Russian bid — says he’s not worried about Russian influence because CEZ is in a position to dictate the deal’s terms.

“There aren’t that many such tenders in the world,” he said. “We know the state of the industry, so we can be rather demanding, and we are.”