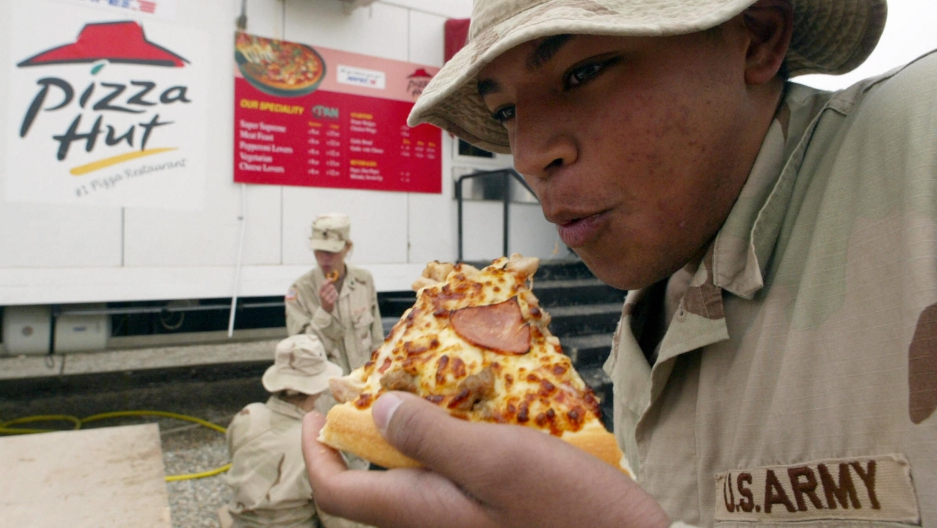 A US soldier eats pizza at the military base of Talil, near Nasiriyah in southern Iraq.
Credit: Abdelhak SENNA
Share

KARACHI, Pakistan — Thousands of Pakistanis are fuming at Pizza Hut after the US-based chain withdrew its all-you-can-eat offer during Ramadan.

Pizza hut says that it just wants to "reduce gluttony" by limiting customers to a single regular pizza, a salad and unlimited drinks. What are the Pakistani citizens to do? Complain using social media, of course.

"Pathetic and a misleading deal. It's only one regular pizza with bottomless Pepsi, not all you can eat," said one post on Pizza Hut Pakistan's Facebook page.

More from GlobalPost: The world via Pizza Hut

Pizza Hut opened its first restaurant in Pakistan in 1993, and now has 44 chains across the country. In previous years, the restaurant would be packed for the evening meal of Iftar. Starving diners hoping to break their fast could gorge on pizza after pizza, all for about $6 bucks — a figure that was probably unsustainable.

According to Pizza Hut Pakistan's General Manager of Marketing, Marya Khan, “the new deal is affordable for the average income society,” and keeps "with the very spirit of Ramadan."

According to the Express Tribune, the all-you-can-eat deal had ballooned in price during the final 15 days of Ramadan last year, due to its high demand. Now, angry Pakistanis are turning to Chinese buffets or burger joints, the Daily Telegraph reported.

McDonalds, for example, offers a Ramadan special that includes a burger, fries and a drink for less than $3.

A traditional Pakistani iftar is fried chickpea fritters, still the most popular way to break fast, according to a survey by Gallup Pakistan.