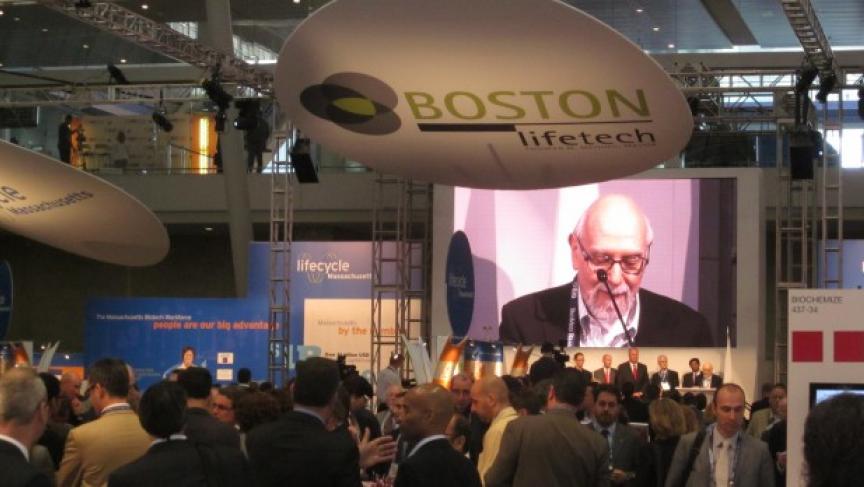 Every state has natural trading partners. Texas sends a lot of stuff to neighboring Mexico. Michigan favors Canada. The state of Washington likes to send its products across the Pacific.

“We in New England have always been part of the Atlantic economy,” said André Mayer with Associated Industries of Massachusetts.

The Atlantic economy features a lot of trade in high-tech gadgets: computers and electronics, aviation equipment and pharmaceutical devices.

But New England doesn't just trade across the Atlantic. Mayer pointed out that Europe has also heavily invested in New England companies: major banks in New England are European-owned, the largest supermarket, Stop and Shop, is Dutch-owned. European companies have also started buying up Boston-area biotechs.

“As a result, we are more sensitively affected by events in Europe than the country as a whole,” Mayer said. “If there’s a financial meltdown and the euro collapses, and all that, everybody is going to feel it. But if Europe avoids that and has only a mild recession, most of the U.S. won’t feel that much at all. But we’ll feel it much more strongly here.”

The question is: How strongly? It’s hard to say. Trade statistics provide a good big-picture snapshot, but can’t tell you everything. And the latest data are a few months old.

And most New England companies with deep European connections were reluctant to discuss the matter as well. Mayer wasn’t surprised to hear this.

“One of the issues is that companies are much more ready to talk about good news then bad news. And if we’re looking at a slowdown, they shy off from talking about it,” he said.

At a major biotech conference taking place in Boston — Massachusetts has more than 800 life science companies, with more than 160 in Cambridge alone — the reaction was largely the same.

“I wish the head of our business was here. I’m really not the right person to do that. Could you come back?” one woman said. That was the response across the board.

One person did have some time to speak with though. Mike Sullivan, vice president of operations for Maine Biotechnology Services, works with clients throughout the world. The company, which manufacturers monoclonal antibodies, is based in Portland. He said the economic crisis in Europe is slowing down research and development.

Still, Sullivan said delays from European customers have had only a minimal impact on the company’s bottom-line. He said they haven’t had layoffs or anything like that.

“The impact of the European economy slowing down, I think for us, it’s always a little bit subservient to the U.S.,” he said.

New England states might rely heavily on European trade, but that trade still only accounts for a fraction of the region’s overall economic activity. In Massachusetts and Connecticut, trade with Europe accounts for roughly 2.5 percent of the state domestic product, according to Census Bureau data.

Still, economist Ross Gittell, vice president and forecast manager for the New England Economic Partnership, said a weakened Europe makes it harder for the regional economy to get going and gain some traction. And Gittell said there’s not much that can be done about Europe’s problems from over here.

“I don’t think there’s anything any one individual company could do or one individual state could do. It’s even questionable what the U.S. or President Obama could do to really affect the European economy,” Gittell said. “A lot of the firms in New England that do have significant exports are just tracking those markets, trying to diversify into growing areas, maybe into Brazil and stronger economies that are outside Europe.”

Companies across the nation are doing just that. But it’s trickier here in New England.

“The stuff we make tends to be very expensive,” Mayer said. “It’s high-end, state-of-the-art stuff. Otherwise you can’t compete, you can’t compete manufacturing commodity product here in New England. It can be done cheaper in South Carolina, or Texas, or Malaysia, or wherever. So, our markets have been places with money.”