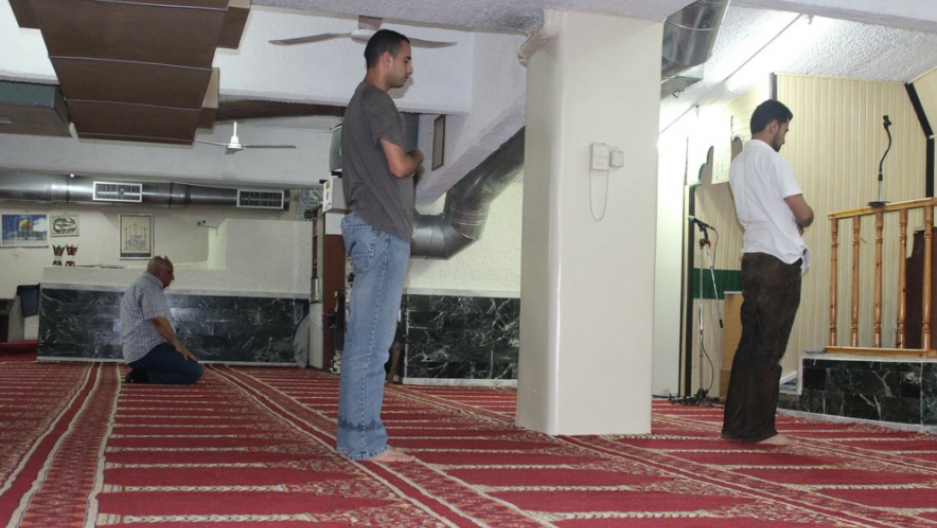 Athens' Muslim community is forced to worship in an unofficial basement mosque. (Photo by Mathew Brunwasser.)

The Greek constitution says that while Orthodox Christianity is the “prevailing” religion of Greece, the state guarantees freedom of worship for all faiths.

But it doesn’t look that way to many who aren’t Orthodox Christians, including Muslims who are forced to worship in an unofficial basement mosque in Athens.

The Greek government has not allowed an official mosque to be built in Athens since the country became independent from the Turkish Ottoman Empire in 1821.

Ziad el-Sharkawi, born in Athens to Egyptian and Lebanese parents, says freedom of worship doesn’t mean the same thing for Christians and Muslims.

“The difference is people pray in churches and I pray in an underground basement,” he said.

A 1936 law requires houses of worship to get a permit, which Sharkawi says the government won’t hand out. At least not to Muslims. So this mosque is one of dozens in Athens alone, operating illegally.

Authorities do turn a blind eye. But congregants say that’s only a half-way solution. A government plan to build an official mosque has been stalled for more than a decade.

At a nearby cafe, some local residents say they’re unhappy about their Muslim neighbors. Hristina Yanaki has lived in the neighborhood for 35 years.

“If they build the mosque here in the neighborhood I would oppose it along with many others,” Yanaki said. “But if they want to build it on the top of a mountain I would have no problem.”

The battle over the Athens mosque has been complicated by Greece’s problem with illegal immigration. Thanos Plevris, a member of parliament from the governing right-wing New Democracy party, says he fully supports freedom of religion.

But allowing this mosque to be built is a bad idea.

Human rights groups say the issues are separate. And that it’s not just Muslims facing religious persecution. Panayote Dimitras, a human rights activist from the Greek Helsinki Monitor, says church and state are not separate in Greece.

“Not every state has to be like France, but no state should be like Greece,” Dimitras said. “Greece is a state which has nothing to do with the criterion of state neutrality vis-à-vis religions and respect of religious minorities that exist in all other European and North American countries."

One key example of that lack of neutrality, Dimitras says, is the oath taken by Greek parliamentarians.

Lots of places have lawmakers swear in with a holy book, if they choose. But the swearing in ceremony in June of Greek Prime Minister Antonis Samaras was done in front of a group of black-robed Greek Orthodox bishops.

Such ceremonies are not officiated by high religious officials anywhere else in Europe, Dimitras says. But they are in Iran.

“The legal status is not the same for every church,” said Theodor Kontidis, a Catholic priest.

“The Orthodox Church is the state church and is the most important and very close to the state. For all other religious communities, something is problematic," Kontidis said.

As a result, Kontidis says, the Catholic bishop is not recognized as the CEO of all the churches in his diocese. Paperwork and property decisions are a big headache. Dimitras, the human rights activist, says the idea of Greeks being of different faiths is foreign to Greeks. So foreign that religious minorities are dealt with by the foreign ministry.

Until recently the official name for minority religions in Greece was “foreign dogmas.”

Dimitras admits there have been some improvements in recent years. Laws preventing the opening of new temples of other religions have been relaxed or abolished. And while the law criminalizing proselytizing by other faiths remains on the books, it’s no longer enforced.