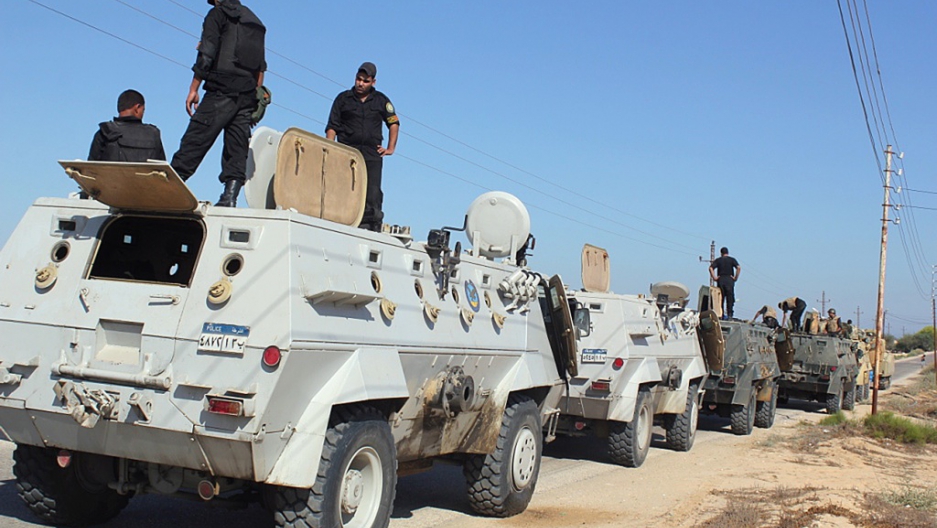 Egyptian security forces stand by their Armoured Personell Carriers ahead of a military operation in the northern Sinai peninsula on August 08, 2012.
Credit: STR
Share

The assault by Egyptian forces, the first aerial deployment by Egypt’s air force in more than three decades, appeared to be a reaction to an attack by masked militants on an Egyptian army outpost on the Israeli border Sunday night.

Sixteen Egyptian soldiers were killed in that attack.

The identities of the militants remain unknown. Some have speculated it could be foreign terrorists who have slipped into Egypt from Gaza, which borders Egypt’s Sinai Peninsula.

It might also have been Bedouin insurgents living in Sinai. Armed Bedouin and other militant groups in the Sinai Peninsula have flourished in a security vacuum left by last year’s Egyptian revolution. Bedouin, who belong to a culture distinct from mainland Egyptians, have long complained of discrimination and persecution at the hands of the state.

The militant attacks and the army’s subsequent response represent a serious test for Egypt’s new president, Mohamed Morsi. Morsi has struggled to assert his authority over the country’s entrenched military, which moved to consolidate power for itself in the days after last month’s election.

Critics have also accused Morsi of being soft on Islamic extremism because of his ties to the Muslim Brotherhood.

While Morsi adeheres to the Brotherhood’s more moderate strain of political Islam, he is still beholden to a more radical constituency that may sympathize with Islamist militants in Sinai and may balk at the president’s support for a military crackdown, analysts say.

Others say the latest incident in Sinai will sharpen the already rising sentiment that Morsi is an ineffectual leader. Morsi took three weeks to appoint a cabinet, and has so far failed to enact any of the measures he planned as part of a “100 days” program.

“He obviously lacks political experience,” said Hisham Kassem, an independent publisher and political analyst in Cairo. “I am in shock, frankly, with his performance [in general]. He’s simply not qualified to be president.”

In response to Sunday’s attack, which the government says could have been avoided if security agencies had acted on known intelligence, Morsi dismissed a series of high-level security officials, including the country’s head of intelligence. It was the biggest security shake-up since Egypt’s uprising in 2011.

Morsi also vowed to crack down on militancy in the Sinai Peninsula by “retaking” it from the armed gangs that have sprung up in the wake of the 2011 revolt.

The head of the Brotherhood’s Freedom and Justice Party in North Sinai, Abdel Rahman Al Shourbagy, told GlobalPost that the army “needs to cooperate better with the people of Sinai” in order to prevent such attacks.

“They are willing to volunteer to help the Egyptian army crackdown on militants,” Shourbagy said.

The army, which controls Sinai security policy, issued a statement through state television confirming an army operation in the area but did not give further details.

Journalists on the scene said via Twitter that they did not see any destruction, nor were there bodies or injured at the hospitals or morgues.

Security forces told local reporters they were planning to transfer the bodies of the 20 militants to the public hospital in the North Sinai capital, Sinai-based journalist Muhamed Sabry told GlobalPost. But by the afternoon on Wednesday, no foreign or local media were able to independently verify the casualties.

“Nobody knows if they are actually militants or just Bedouin civilians,” Sabry said.

Bedouin civilians have voiced concern over the lack of security in the Sinai Peninsula since the revolution that ousted Hosni Mubarak last year. A proliferation of arms from Libya, which is recovering from its own civil war last year, has contributed to the insecurity, locals say.

“The general insecurity post-revolution is making the situation worse in Sinai,” Al Shourbagy said. “There are a lot of weapons coming from Libya, and many of the militants were imprisoned and tortured before the revolution — and were released or escaped and are now on the loose.”